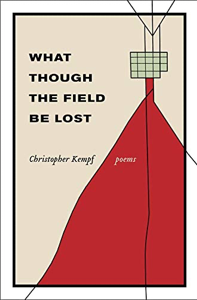 Christopher Kempf is Visiting Assistant Professor in the Department of English, where he teaches in the MFA Program. He is the author of the poetry collections What Though the Field Be Lost (LSU, 2021) and Late in the Empire of Men (Four Way, 2017).

Professor Kempf offers his reflections on a recently published poem by Eavan Boland below:

Eavan Boland’s poem “The Break-Up of a Library in an Anglo-Irish House in Wexford: 1964” offers a haunting meditation on the vulnerabilities and violences implicit in western empire.

“[T]he end of empire is and will always be / not sedition nor the whisper of conspiracy,” Boland writes, “but that // slipper chair in the hallway / that has lost the name / no one will call it by again.”

Boland is writing here about the 17th and 18th century mansions from which a Protestant Anglo-Irish aristocracy ruled over a predominantly Catholic population.  But she is also—and perhaps more importantly—diagnosing how power continues to encode itself in and through language.  Echoing Ezra Pound’s maxim that “if a nation’s literature declines, the nation atrophies and decays,” her words testify beautifully to the importance of an educated citizenry, one able to command language for its own uses rather than be commanded by it.  Boland neither celebrates nor mourns the passing of this aristocracy, but I detect in her tone a note of wistfulness, I think, for a richer, more accurate language—something wondrous has been lost, Boland suggests, even as something powerfully democratic has been gained.

I admire this ambivalence, and I am curious about its implications in the wake of an attack on the U.S. Capitol which, because of her untimely death, Boland never witnessed.

In a culture obsessed with “STEM” education and so linguistically impoverished, therefore, that we cannot distinguish between real and fake news, Boland reminds us that facility with language is the single most important—and contested—political instrument.  And poetry itself, Boland suggests, remains vital to both social justice and democratic belonging.

Watch Professor Kempf read Eavan Boland’s “The Break-Up of a Library in an Anglo-Irish House in Wexford:1964″ and a poem of his own, “National Anthem” on our Instagram!