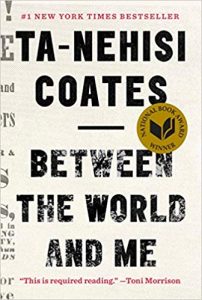 Between the World and Me, by Ta-Nehisi Coates. Click for catalog link.

Between the World and Me is a 2015 novel by Ta-Nehisi Coates. The novel is written in two parts; first as a letter from a father to his son, then later as a letter from the same man to his nephew. The novel is semi-autobiographical and recounts the narrator’s experiences growing up Black in inner-city Baltimore. Coates reflects on many issues within the book, including the school system, the police, and street life. Coates uses the metaphor of “the Dream” within the novel to highlight inequalities. While the American dream has traditionally represented the idea that anybody from any background can achieve their goals, Coates’ subverts these ideas though showing how only white people can achieve “the Dream,” emphasizing how they are able to continue to benefit from slavery, racism, and oppression within the United States.

Similarly, Coates introduces the idea that black people’s bodies “don’t belong to them,” drawing attention to the extreme negative effects that the unfair and racist system within America has.

Between the World and Me is a novel about race. Coates disputes that America was built on the backs of slaves and that being Black in America will make him a constant target. He describes how vulnerable black bodies are to police brutality, street fighting, and drug abuse. Coates wants his son to understand what it means to be a Black man in today’s times. Coates talks about “the Dream” is referring to the “American Dream.” He describes it as “perfect houses with nice lawns” and a general sense of accomplishment and well-being that African-Americans rarely achieve because of the lack of privilege. Another important idea and theme in Between the World and Me is Fatherhood. Coates feels responsible for his son’s education as a Black man in America. He wants him to become an intelligent Black man who is able to comprehend what it means to be Black in America. This letter is an attempt to disseminate some of the knowledge Coates has collected over the years to his son.

Between the World and Me is a work that should be read because it gives a voice to the Black male experience without these experiences being told by someone who isn’t a Black man. Most works, especially American literature, that describe experiences within urban communities are often filled with stereotypes and stigmas of Black people. This is, most times, to the detriment of Black men. Yet, the actual voice of the Black men is absent. If a Black man is present, he is often given a voice where he speaks as the antagonist or is silenced by his environment. This silence is as a result of occurrences that led to his demise: police brutality, death, drugs, violence, imprisonment, all of which are many among other catalysts.

However, by Coates taking back his voice he not only breaks the cycles and stigmas placed on him by his society, but his voice is part of an effort to break the chains of the standard Black man experience. By Coates writing this novel to his son, it is his way of showing his son that he too can defy the image of the Black man that imbeds negativity generationally.

We were very moved and inspired by Between the World and Me as we read the painful words and personal experiences Coates underwent, explaining the ways he has studied and lived through them. The aspect that stood out to us the most was the notion of “The Dream.” Coates speaks of this notion as a mass delusion in America, only attainable for white people. We found it very saddening that everyone tries to reach this “dream” but African-Americans strive for something they cannot realistically attain. Referencing his son throughout the text made Coates’ writing very impactful, as his purpose for his writing is to warn his son of issues such as police brutality, institutional racism, and the need for an education to survive, ultimately preparing him for a life in an environment that treats African Americans as inferior. 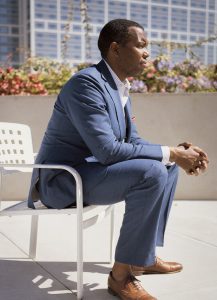