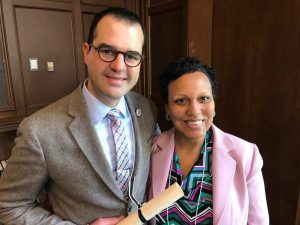 Sotomayor’s book, The Sovereign Colony, (which was covered in a previous post) contains original research concerning Puerto Rico’s participation in the Olympic Movement while still a colonial territory from the 1930’s to the 1960’s. His is the first non-library science monograph winner in the 35 years of the award.

Sotomayor received the award on May 22, 2017, at the 22nd Annual Conference of SALALM. It was presented by Sarah Aponte (above), Associate Professor and Chief Librarian, CUNY Dominican Studies Institute, a previous Medina Award winner. The Medina Award is given annually to recognize outstanding contributions by SALALM members to Latin American Studies, to encourage accomplishments in research and scholarship. Selection is based upon scholarship, style and the importance of the work. The award’s namesake, José Toribio Medina, was a prolific Chilean writer and historian, contributed to more than 250 titles throughout his career.

SALALM works to promote and develop library collections related to Latin America and the Caribbean through conferences, scholarships and awards, a digital repository, and more.

The Sovereign Colony is currently being translated for a forthcoming Spanish edition, titled “La colonia soberana: Deporte olímpico, identidad nacional y relaciones internacionales en Puerto Rico.” This edition will include a new preface by Sotomayor, and it will include a prologue by a scholar of Puerto Rican history, Dr. Francisco Scarano, Professor Emeritus in the Department of History and former Director of the Latin American and Caribbean Studies Program at the University of Wisconsin-Madison. The edition will be available winter 2018.