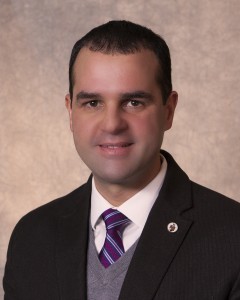 Antonio Sotomayor, Latin American and Caribbean Studies Librarian and Assistant Professor at the University Library, has published his book The Sovereign Colony: Olympic Sport, National Identity, and International Politics in Puerto Rico with the University of Nebraska Press.

The Sovereign Colony presents original research into Puerto Rico’s process to attain independent representation at the Olympics while a colonial territory, a movement that began in the 1930s. It establishes the fundamental role of sport in Puerto Rican nationalism and the country’s relationship with the United States and the world. It draws on archival research in Puerto Rico and the United States to tell the story of a colonized people utilizing the Olympic Movement to foster national identity and participate in international relations.

Sotomayor received his PhD in Latin American History from the University of Chicago in 2012, and joined the University of Illinois Library in the fall of that year. He also holds appointments in the Department of Recreation, Sport, and Tourism, and the Department of Spanish & Portuguese. His work has appeared in Caribbean Studies and the Journal of Sport History. His book has also led to several speaking invitations for the coming year: he will address the Comité Olímpico de Puerto Rico [Olympic Committee of Puerto Rico], the 13th International Symposium on Olympic Research in Vitória, Brazil, and the University of Physical Culture and Sport Science Manuel Fajardo in Havana, Cuba.