By sbnagle2@illinois.edu on August 25, 2014 in Global Culture, Global Studies as a Field of Study, Politics, Sociology 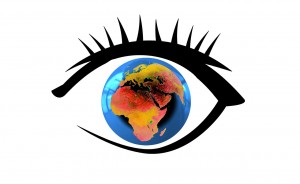 Images are active players in the game of establishing and changing values. They are capable of introducing new values into the world and thus of threatening old ones.  J.T. Mitchell, 2005.

The concept of “global imaginary,” as coined by Manfred Steger, refers to the consciousness of belonging to a global community – a consciousness that has emerged in recent decades with the rapid rise of communication technologies and the decline of nation-based political ideologies. The concept builds on Benedict Anderson’s theories of “imagined communities,” but while Anderson used the term to refer to shared ideologies within nations, Steger posits that globalization is breaking down the imagined walls of nationhood and bringing about “a shared sense of a thickening world community.”  Steger insists that in order to understand and solve the great global problems of our time, we must first understand the “global imaginary” and all that it represents.

One artist and scholar has focused on visual culture as a way to understand the concept of “global imaginary.”  Tommaso Durante’s project, the Visual Archive Project of the Global Imaginary, explores the visual evidence, through photographs, of the cultural changes happening worldwide as a result of globalization.  Images are powerful conveyors of information. They carry a wealth of embedded knowledge about culture, values, and ideology. And Durante explains how, “due to the global spread of new media technologies, the massive uses of personal electronic devices and the development of intelligent architectural interfaces, visuality is increasingly eclipsing textuality and images, with their ‘surplus of value’, dominate the world.”  Indeed, if we look at how social media, with its image-heavy and text-sparse format, has become a unifying and polarizing force in the world, we can see how important visual culture is to the social forces that shape global society.

The photographs in Durante’s archive cover the cultural, political, and ideological dimensions of the “global imaginary.”  The photographs encompassing the cultural dimension are full of people, advertisements, storefronts, public spaces, and symbols that represent merging nationalities and ideologies.  The Apple logo is seen prominently displayed in a modern glass shopping center in East Shanghai, and then on a sign in from of an “iShop” housed in a beautiful historic building in Rome.  Through the images, we see how symbols and cultural icons stretch across the boundaries of nations and create a shared global visual landscape.  The images also venture into the political dimension, showing protest movements in the U.S. and Chile.  The ideological dimension shows advertisements and promotional imagery that deliberately make use of the the globe or words like “global” and “international” to produce a sense of shared meaning and influence cultural identities.

The archive may just be one artist’s perspective of the visual culture of globalization, but it is nonetheless a compelling portrait of the ways in which globalization is inciting a shared sense of meaning and belonging among global citizens.  The collection is a powerful illustration of the concept of the “global imaginary,” adding a visual dimension to Steger’s theory and, if Durante’s intentions come to fruition, serving as a historical archive of the process of globalization.

Learn more about globalization and the “global imaginary” with the resources below!

Benedikter, Roland;  Ziveri, Davide.  (2014). The global imaginary, new media and sociopolitical innovation in the periphery: the practical case of an Internet-based empowerment project in Palestine and Israel. Continuum: Journal of Media & Cultural Studies, 28:4.

Steger, Manfred B.  (2009). The Rise of the Global Imaginary and the Persistence of Ideology. Global-E Journal, 3.

Steger, Manfred B.. (2008). The rise of the global imaginary: political ideologies from the French Revolution to the global war on terror. Oxford : Oxford University Press.