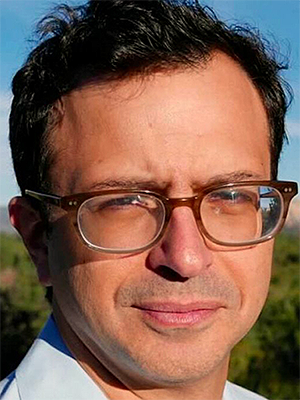 The first-generation son of Chilean immigrants, writer and translator Daniel Borzutzky grew up in Pittsburgh, Pennsylvania. He is the winner of the 2016 National Book Award for Poetry for his collection The Performance of Becoming Human which confronts head-on many of difficult questions currently facing our society today. His other books of poetry are Lake Michigan (2018), a series of 19 lyric poems set at an imaginary prison on the real and symbolic border of Chicago; In the Murmurs of the Rotten Carcass Economy (2015); The Book of Interfering Bodies (2011); The Ecstasy of Capitulation (2007); and the chapbook Failure in the Imagination (2007). He has also published one collection of fiction, Arbitrary Tales. Borzutzky’s books of translation include Song for his Disappeared Love by Raul Zurita and Port Trakl by Jaime Luis Huenun, among others.

In The Performance of Becoming Human, he draws hemispheric connections between the U.S. and Latin America, specifically border and immigration politics, economic disparity, political violence, and the disturbing rhetoric of capitalism and bureaucracies. For Borzutsky, to become human is to navigate these borders, including those of institutions, the realities of over- and under-development, and the economies of privatization, in which humans endure state-sanctioned and systemic abuses. Poet Urayoán Noel writes: “To read this book that is a country deposited not in your heart but in your mouth” is to confront becoming human as speech act, as language game, and to know the freedom and the terror of doing so. The painbeauty of Borzutzky’s virtuoso, multi-register flow (abject punchlines included) is also a counter-flow to the death drive of capital, sentences for a radical sentience.” Lake Michigan’s poems continue exploring the themes from Borzutzky’s Performance of Becoming Human, and while the influences in this book (Césaire, Vallejo, Neruda) are international, the focus is local as the book takes a hard look at neoliberal urbanism in the historic city of Chicago. Poet Craid Santos Perez reflects how throughout Lake Michigan, “We are compelled to radically critique our political realities and to inscribe our vulnerable bodies into public song.”

Borzutzky’s writing has been translated into Spanish, French, Bulgarian, and Turkish and has been anthologized in numerous publications. His honors include grants from the PEN American Center and the National Endowment for the Arts.

He lives in Chicago and teaches at English Department and Latin American and Latino Studies Program at the University of Illinois at Chicago.