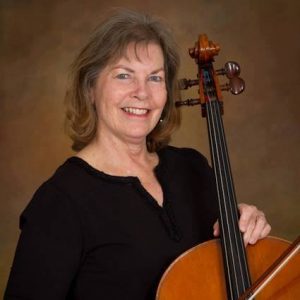 Gail Rolland is a symphony cellist and has been an Orchestra teacher in the Mesa (Arizona) Public Schools for 33 years. Her chosen area is teaching Strings in the 4th, 5th, and 6th grades.

Early in her career, Gail attended the Paul Rolland International String Workshops in Cambridge, England and Lausanne, Switzerland. She has used Rolland Pedagogy extensively in her teaching and found it is especially applicable in the early years of instruction.

Gail has been part of the distinguished faculty at the George Mason University Rolland Workshops and was the Director of the 2016 and 2017 Paul Rolland String Pedagogy Conferences and Kids String Camp at Arizona State University. She has been an instructor with Lynne Denig for a Rolland Workshop in July 2016, in Madrid, Spain, presented a 2017 ASTA Conference session “Applying Rolland Pedagogy” with Nancy Kredel and taught Rolland principles for the cello at a Rolland Workshop in Brazil during the Fall of 2017. She is married to Peter Rolland, Paul Rolland’s son. Together they have raised 6 children. Peter and Gail also run the Rolland Fiddle Camp during the summer in Westcliffe, Colorado.

Gail is looking forward to meeting the participants at the University of Illinois Rolland Workshop and Kids Camp!