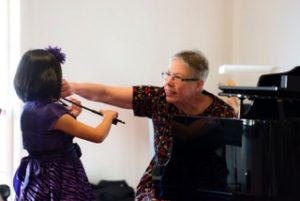 Frances Reedy, a founding faculty member of The Conservatory of Central Illinois, is the coordinator of the school’s Suzuki-Rolland Program and a teacher of violin and cello.  Before the Conservatory’s inception in 1986, she was on the faculty of the National Academy of Arts, where she was teaching under Paul Rolland in its Community Extension Division from 1975 until his death in 1978.

She received a Bachelor’s Degree in Music Education from Oberlin College and a Master’s Degree in Cello Performance from the University of Illinois.  She studied string pedagogy under Paul Rolland and has studied and observed Suzuki teaching both in Japan and in various workshops and programs in the United States.  From 1970-1973 she was a Peace Corps Volunteer in El Salvador, where she established its first Suzuki program.  In 1978 she was on the faculty of the Paul Rolland String Workshop at the University of Illinois, teaching a demonstration group of beginners.  She has also been an instructor at Illinois Summer Youth Music, a Suzuki Festival guest clinician, and a Suzuki Institute faculty member.

She has had articles published in Music Educators Journal, American String Teacher, Suzuki World, and Oberlin Alumni Magazine.  In 1973 she was invited to make a presentation at Oberlin through “Academic Alumni in Service to Oberlin College,” and in 1994 she received an Executive Committee Award for Outstanding Service to The Conservatory. She was a nominee for the Teacher ACE award presented by 40N/88W, the Champaign area Arts, Culture and Education Council, both in 2012 and in 2018.  She is a member of Pi Kappa Lambda and has been listed in Outstanding Young Women of America and various Who’s Who publications.  Professional memberships include American String Teachers Association and Suzuki Association of the Americas.