The Reproductive Health and Toxicology Lab studies a wide range of diseases, environmental toxicants, and species. Our goal is to develop a better understanding of how the environment interacts with the reproductive system of animals. Below is a sampling of current research projects in the lab.

Propylparaben and embryo development – Propylparabens are chemicals used as preservatives in pharmaceutical drugs, cosmetics and food due to their effective antimicrobial properties. They are classified as endocrine disrupting chemicals as they have known weak estrogenic effects. We are interested in investigating the effects of propylparaben on embryo development, using a mouse model. Immunofluorescent staining is performed in these cell lineages: Inner cell mass (OCT-4), trophectoderm (CDX-2) and actin cytoskeleton (Phalloidin) in order to determine if propylparaben impacts the development of these structures. 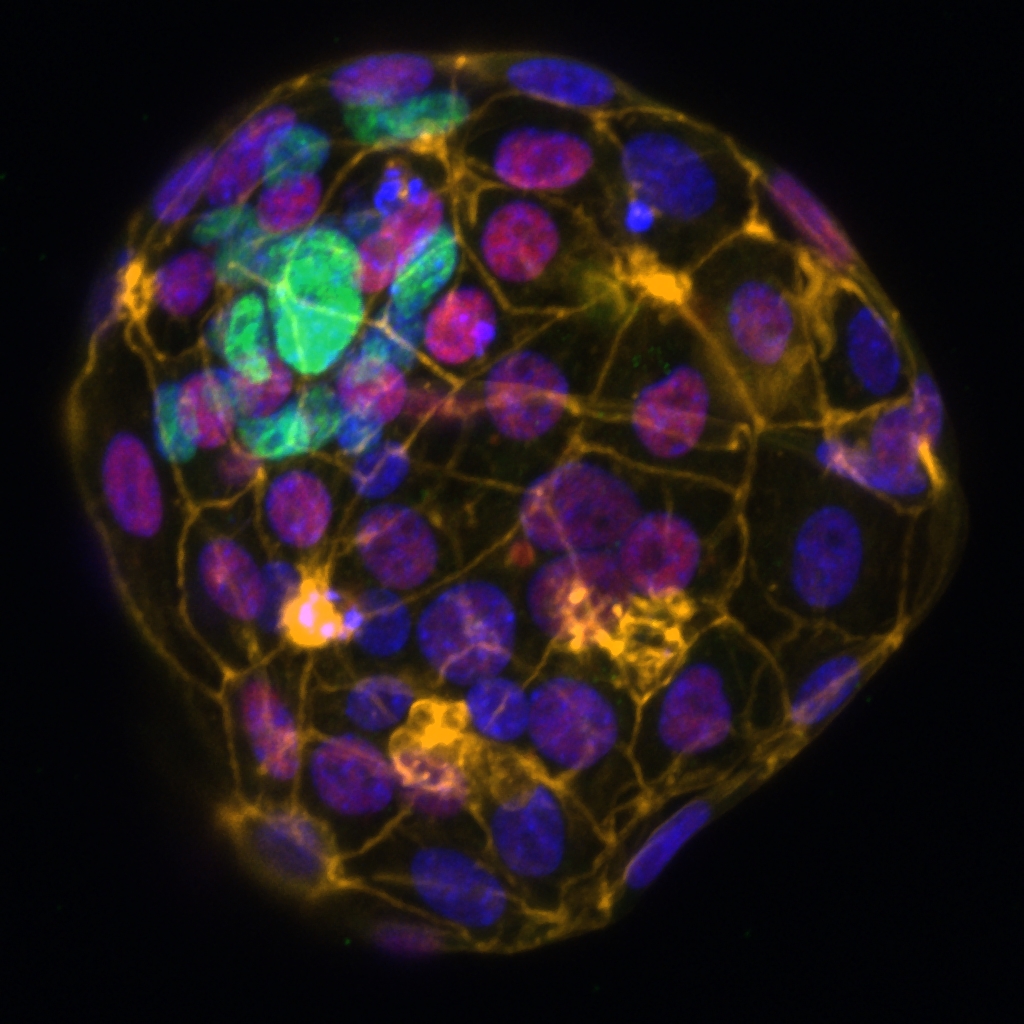 Figure 1: Representative image of immunofluorescent staining of a hatched embryo in Control treatment

Effects of phthalates on embryo implantation – We are interested in the effects of mono-(2-ethylhexyl)-phthalate (MEHP) and di-(2-ethylhexyl)-phthalate (DEHP) on embryo implantation using the mouse as an animal model. DEHP is commonly used in consumer products like plastics and perfumes, and it is metabolized in the body to MEHP. These phthalates are endocrine disruptors that have been implicated in decreased androgen levels in males and potentially endometriosis. Our lab is interested in studying how these compounds affect early development of the embryo and the placenta. 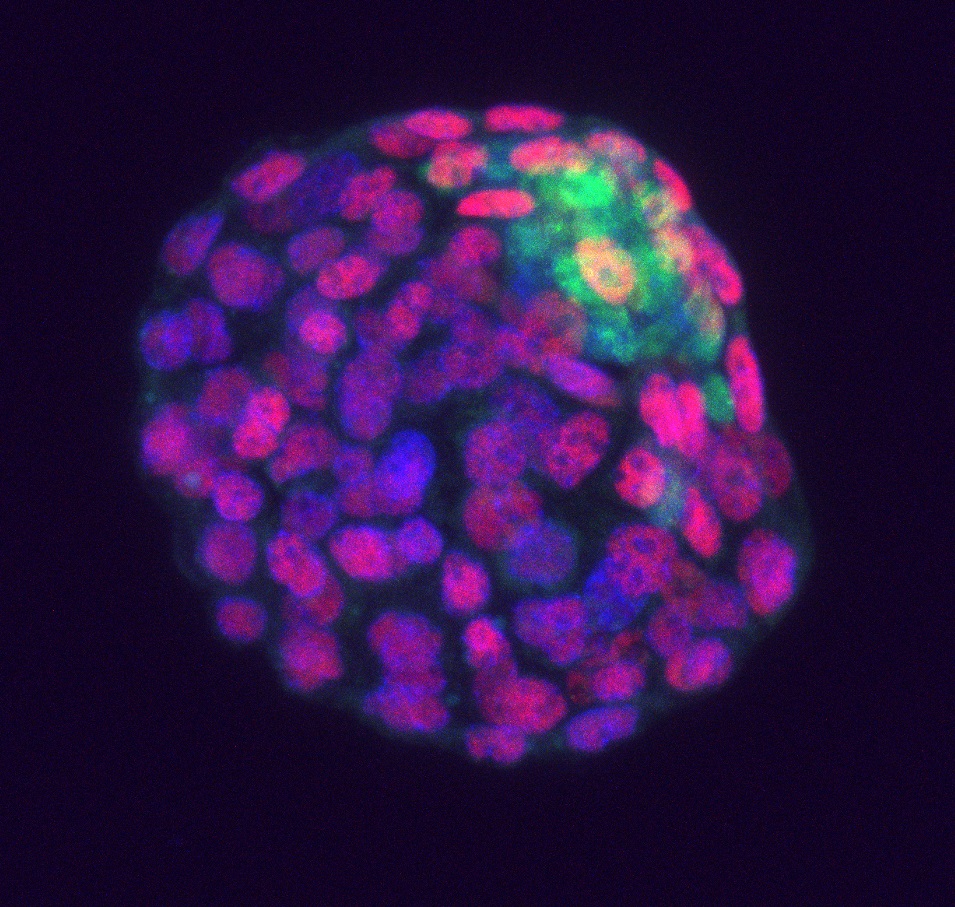 Phthalates, endometriosis, and neuroinflammation–  Phthalates are a large class of chemical compounds used to improve the properties of plastic products as well as some personal care products. These products have become a huge public health concern with detrimental effects on reproductive and even neurological functions. Endometriosis affects 6-10% of women of reproductive age or 35-50% of women experiencing chronic pelvic pain. Moreover, recent studies have suggested a correlation between women with endometriosis and phthalate exposure. The details of how endocrine disrupting chemicals may lead to endometriosis are still unclear. Due to the large role estrogen plays in the disease of endometriosis our lab has developed a mouse model to study endocrine disrupting chemicals as potential instigators of endometriosis in women. Using a surgical model, we are implementing in vitro and in vitro studies to further characterize the toxicity of these phthalates on the uterus. We are also looking at the connection between chronic visceral inflammation caused by this disease and its effect on the brain specifically looking at microglia, the immune cells of the brain. In this study, we explore the effects of phthalates more specifically di(2-ethylhexyl)phthalate (DEHP) in exacerbation of neuroinflammation in a mouse model of endometriosis. 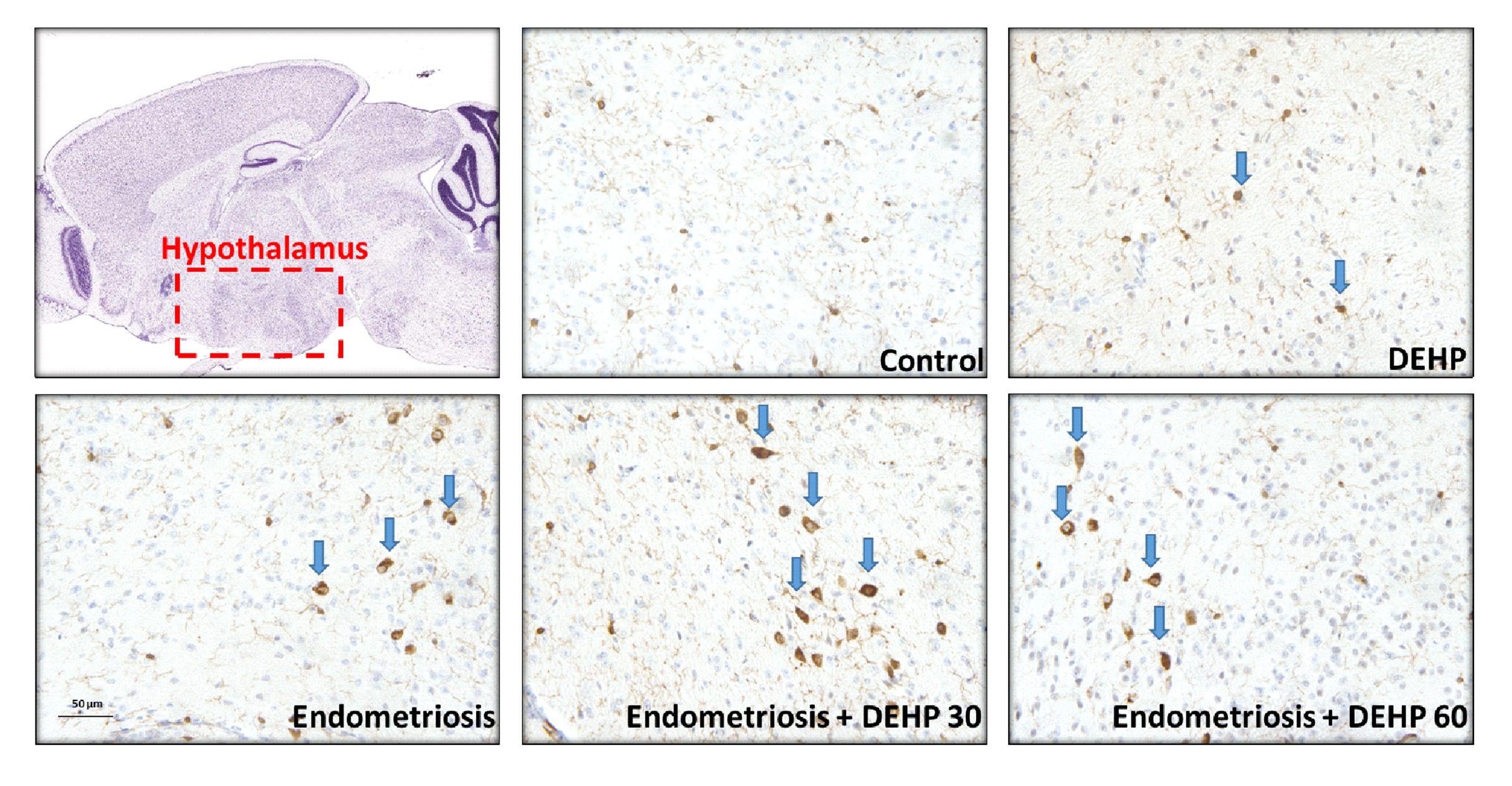 Phthalates and gastrointestinal system – Very little is know about the effects phthalates have on the gastrointestinal system. Recent studies have suggested phthalates like di-isononyl phthalate (DiNP) can cause inflammatory changes in the colon of mice. We are currently exploring the effect of di(2-ethylhexyl) phthalate (DEHP) on colon and ileum of mice exposed to DEHP sub-chronically. We are specifically looking at the markers of cell proliferation, mucus production, and some immune cells; these factors play an important role in regulating the immune environment and maintaining the integrity of intestines. 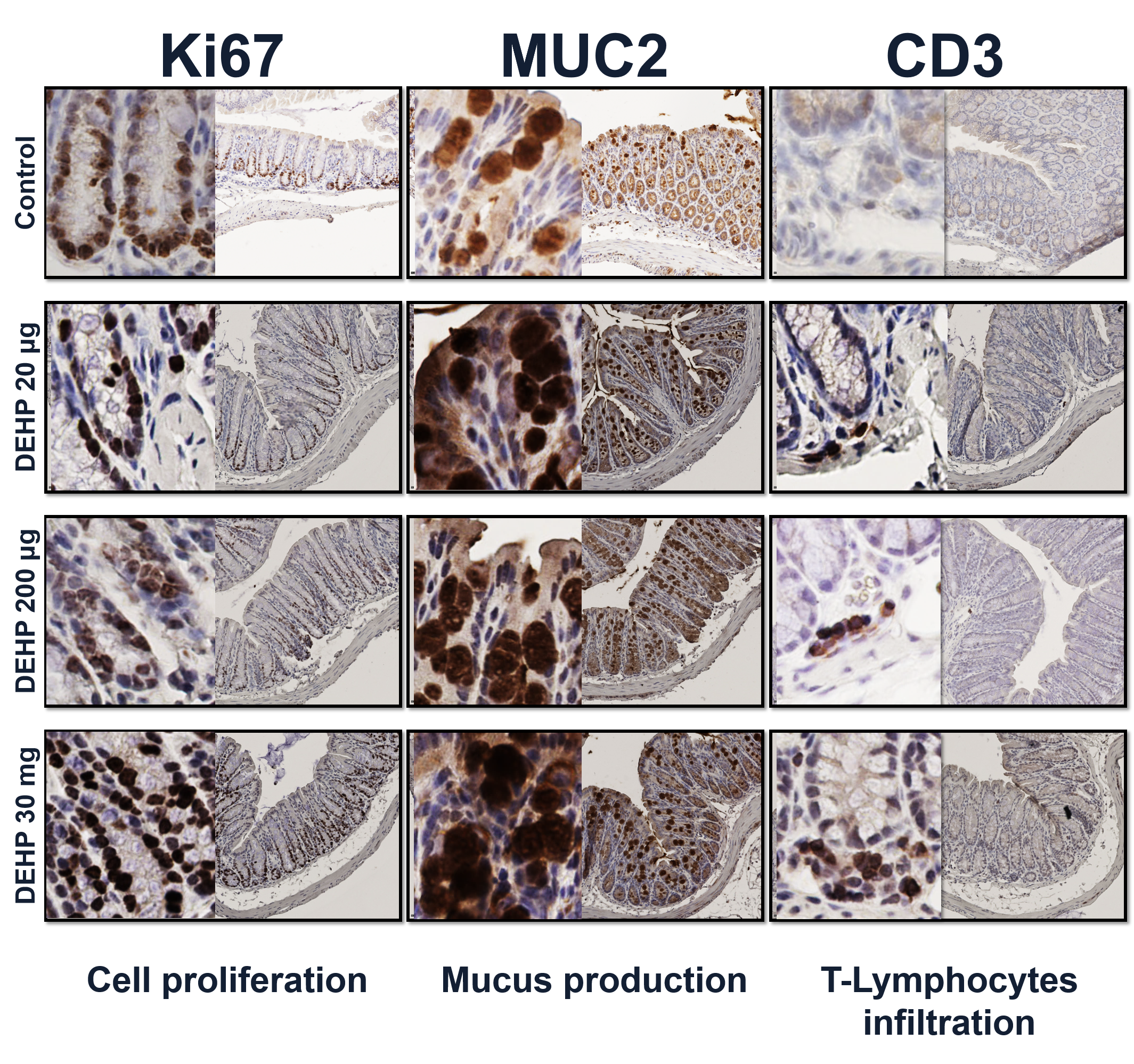 Basigin and embryo implantation – Basigin is a glycoprotein that appears in oncology literature as an important factor in tumor growth and metastasis. It plays a key role in tissue reorganization and angiogenesis in tumors, and these properties also make it important during implantation of the embryo and subsequent placentation. Our lab has developed a basigin knock-out mouse line to study the role of basigin in early embryo development and implantation.  Using our conditional basigin knockout model we have found that loss of basigin expression in uterine cells leads to loss of receptivity in the uterine epithelium and markedly reduced decidualization in the uterine stroma, as well as reduced angiogenesis.  We are now pursuing further studies to determine the molecular signaling pathways involved in the mechanisms by which basigin regulates implantation and early placental development. 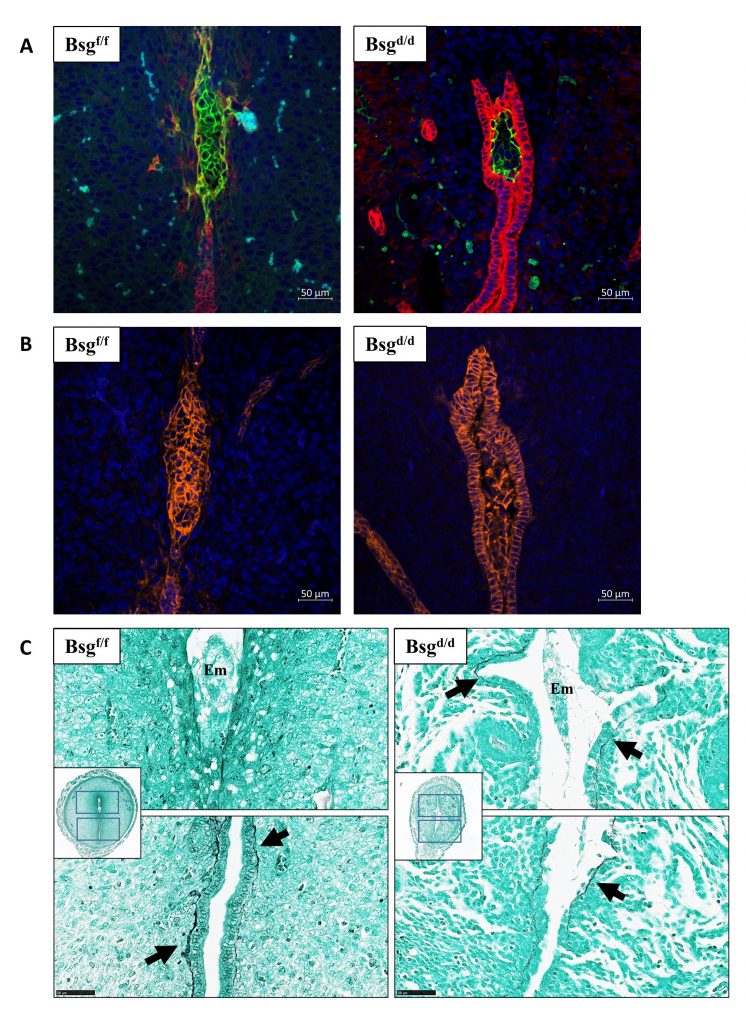 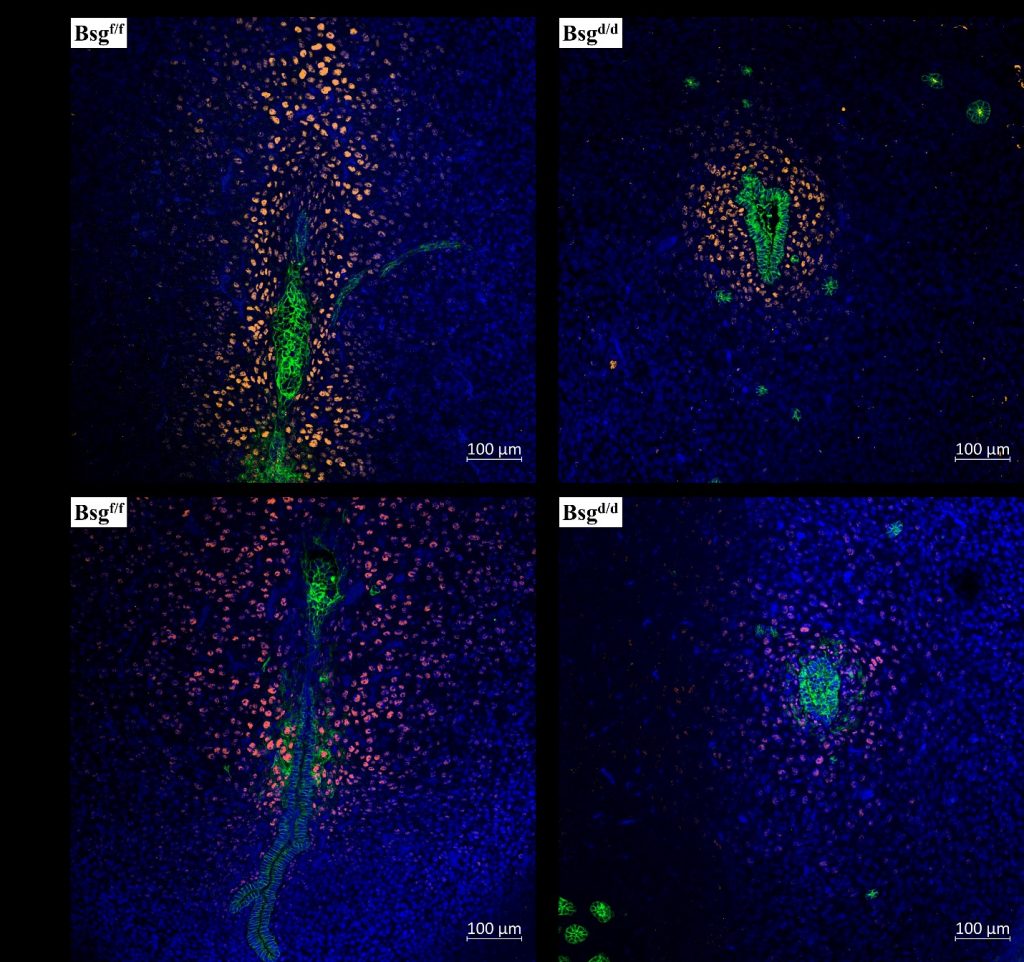 Chicken model of uterine fibroids – Uterine fibroids, or leiomyomas, are the leading cause of hysterectomies in women in the United States and can cause infertility. Previously, our lab has validated the chicken as an animal model to study the human disease as chickens develop fibroids spontaneously on their oviduct (which is the uterus equivalent in the chicken) and these fibroids are of smooth muscle origin—just like uterine fibroids in women! It has been hypothesized that fibroids develop as the result of an insult to the uterus and that inflammation plays a key role in their growth. Because of this, we want to look at dietary intervention with whole flaxseed on fibroids due to their high content of omega-3-fatty acids—which can have anti-inflammatory effects. Other studies have also shown that vitamin D can inhibit the growth and proliferation of fibroids in vitro, so we are also interested in studying the effects of dietary intervention with vitamin D in vivo. In addition, we are also interested in seeing how the gut microbiome of chickens is affected by dietary intervention with whole flaxseed and vitamin D. 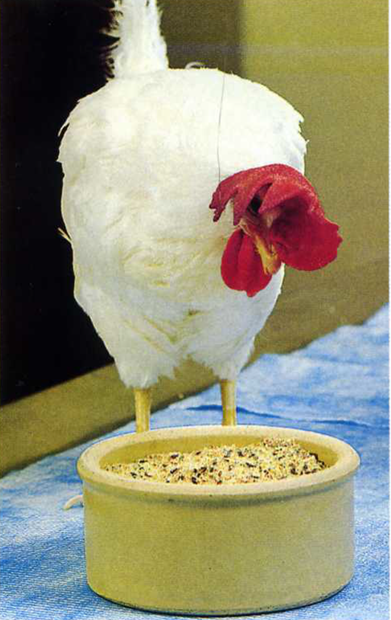 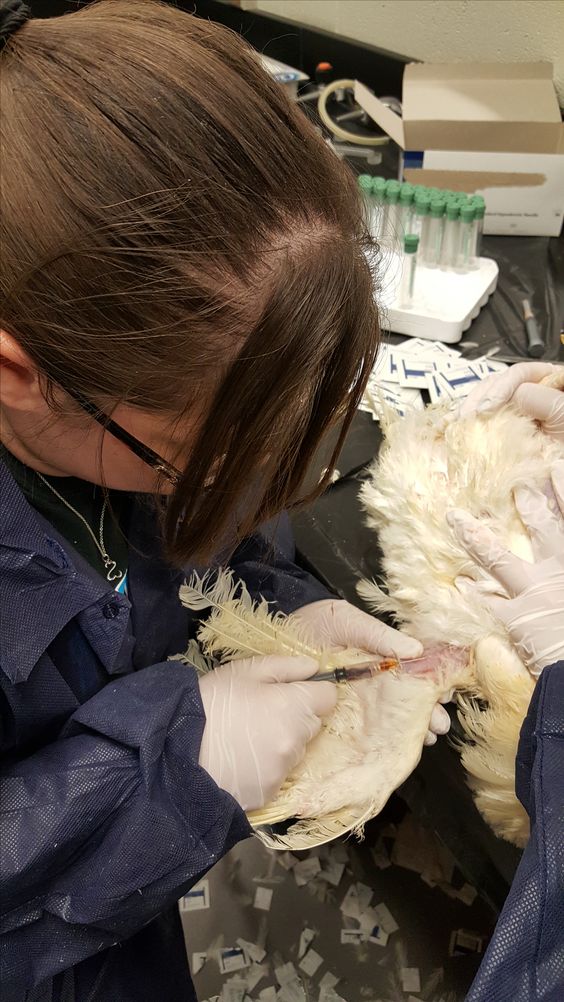 Phenotypic plasticity of reproduction in invasive species – Asian carp escaped from aquaculture facilities in the Southeast U.S. into the Mississippi River during the 1970s. Since entering the Illinois River, they have been steadily advancing towards the Great Lakes, posing a threat to an economically and environmentally important ecosystem. Like many successful invasive species, Asian carp reproduce more frequently and grow faster in their introduced range than in their native range, allowing them to outcompete native species. The theory of phenotypic plasticity of invasive species states that individuals of an invasive population will exhibit different life history traits based on their position relative to the invasion front. Based on this theory, we suspect that Asian carp within the Chicago Area Waterway System (CAWS) differ in their reproductive physiology than individuals in established downstream populations. We are collecting fish from different pools in the Illinois River and assessing their reproductive maturity and function across their extended spawning season. 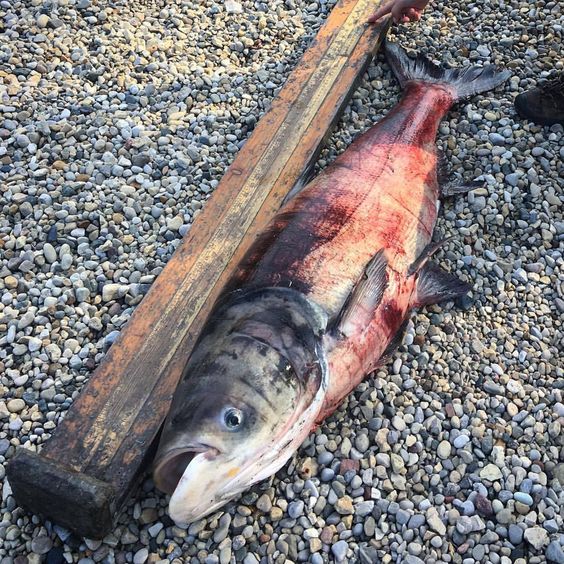 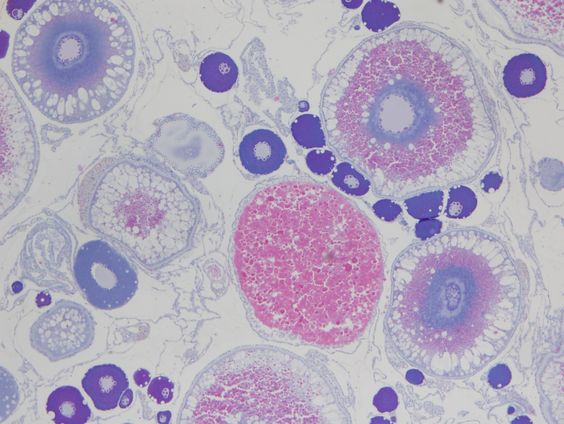