We recently received a pair of maps showing the British and French empires during the interwar period. Neither had been published as a separate map. 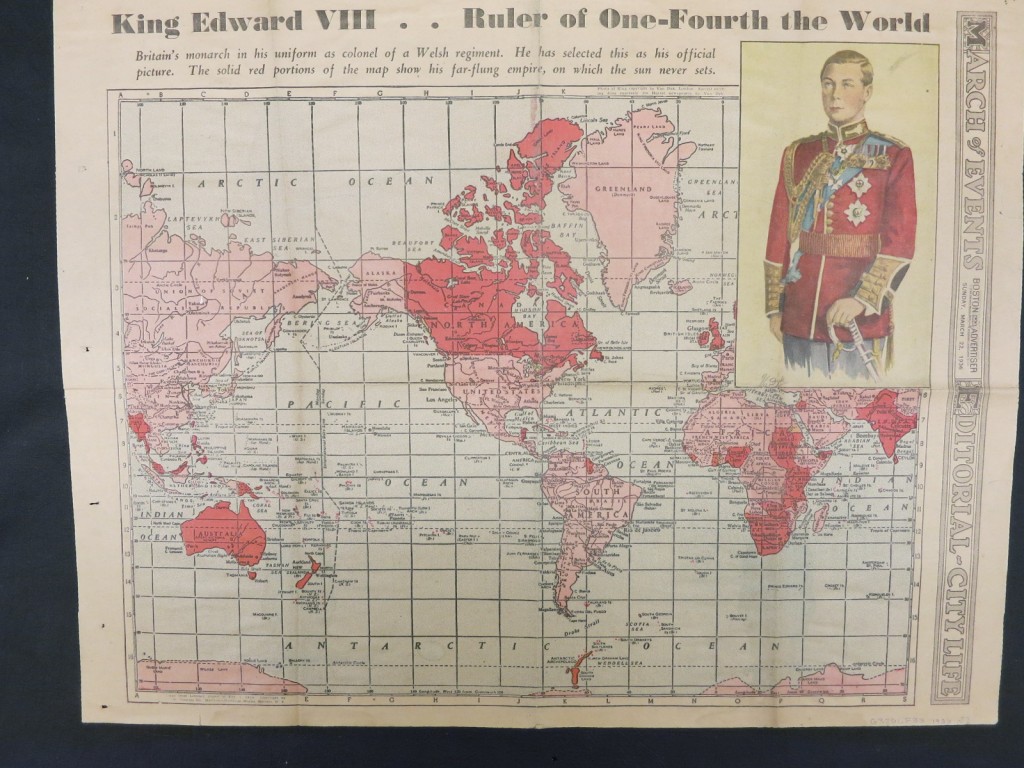 The British map appeared in the March 22, 1936 issue of the Boston Advertiser, and the French map was published as a 2-page spread in the May 1931 issue of Fortune. 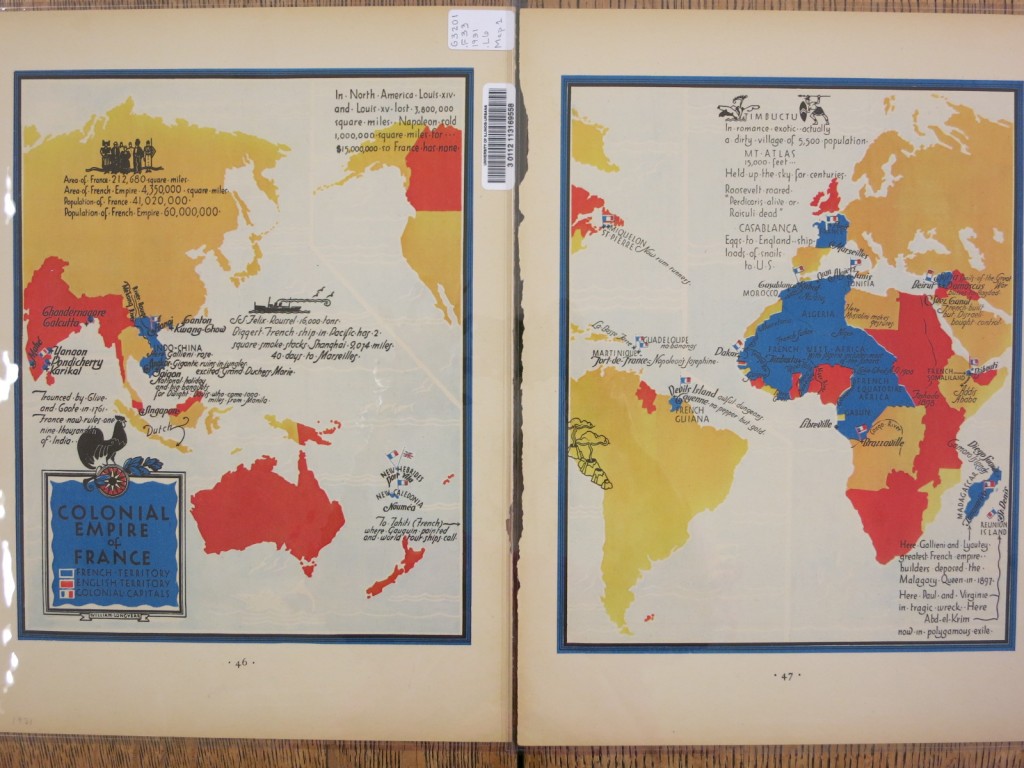 What other maps of empires or imperial realms are in our collections?

Bisiker’s British Empire (and Japan) : Its Features, Resources, Commerce, Industries, and Scenery was published to meet the need for maps of the Empire for educational purposes. 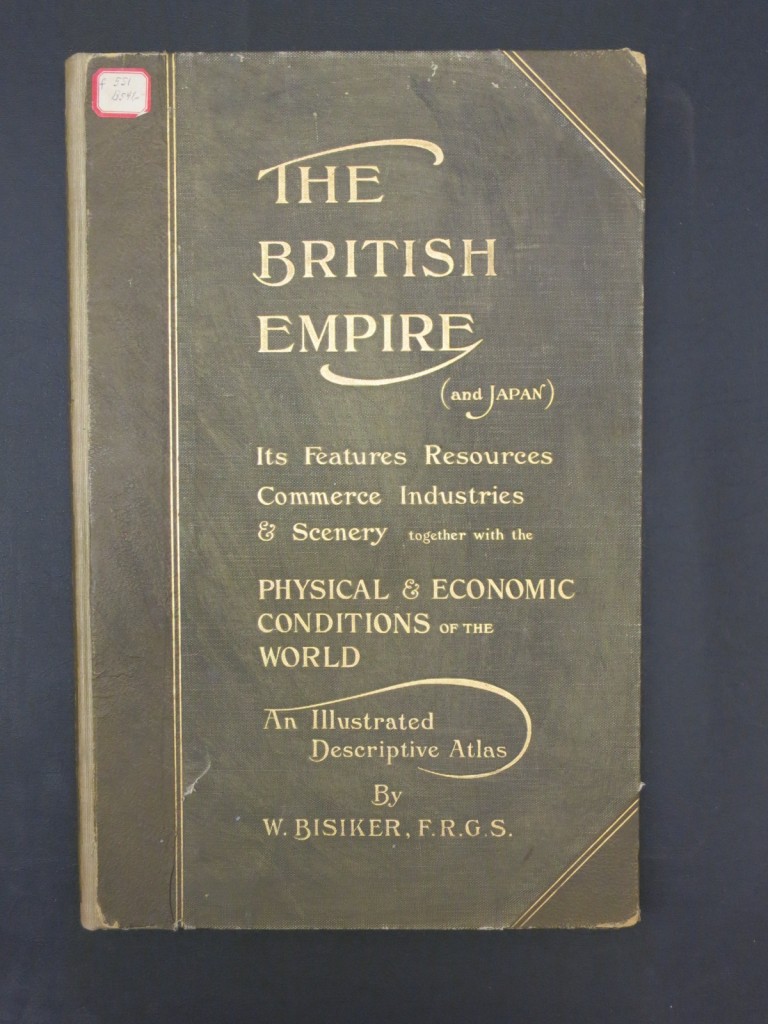 The title requires some explanation. Great Britain and Japan had signed the Anglo-Japanese Alliance in 1902, largely based on both nations’ desire to oppose Russian expansion. From the atlas’ preface: “As its name implies, this atlas deals primarily with the British Empire; though Japan, as the ally of the Empire, has a place beside it….”

The atlas includes a map of the British Empire in 1908 employing the traditional pink tones to show the extent of the Empire. The map also includes tables of statistics of areas and populations of British territories and sizes of the armies and navies of the Great Powers. 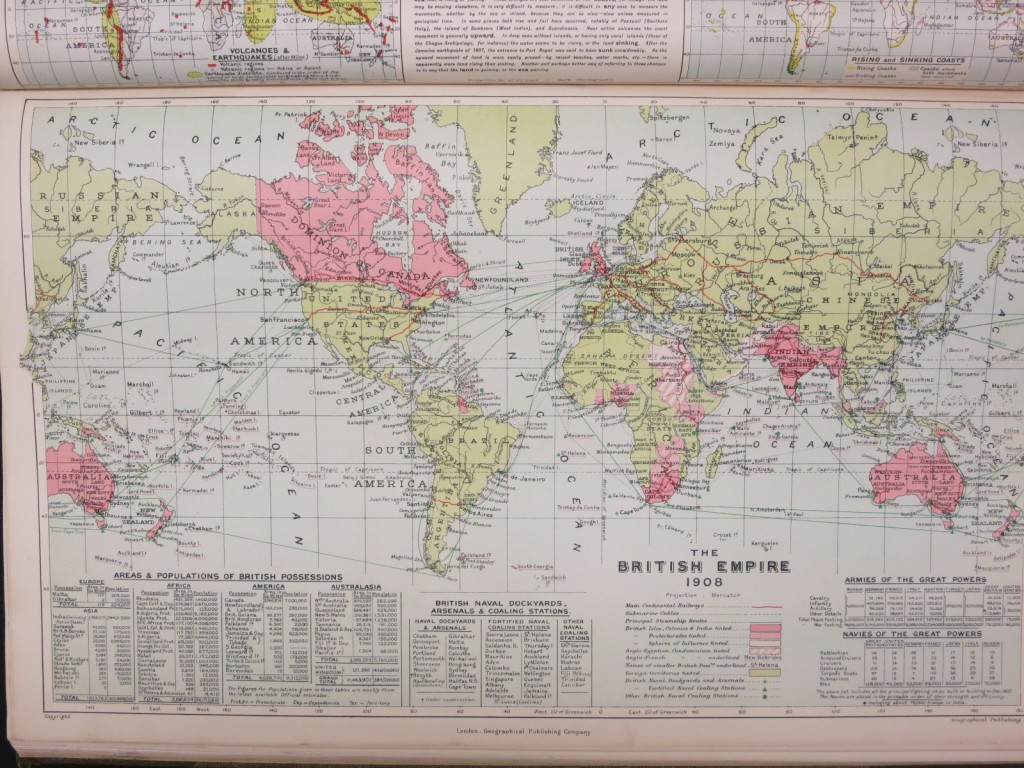 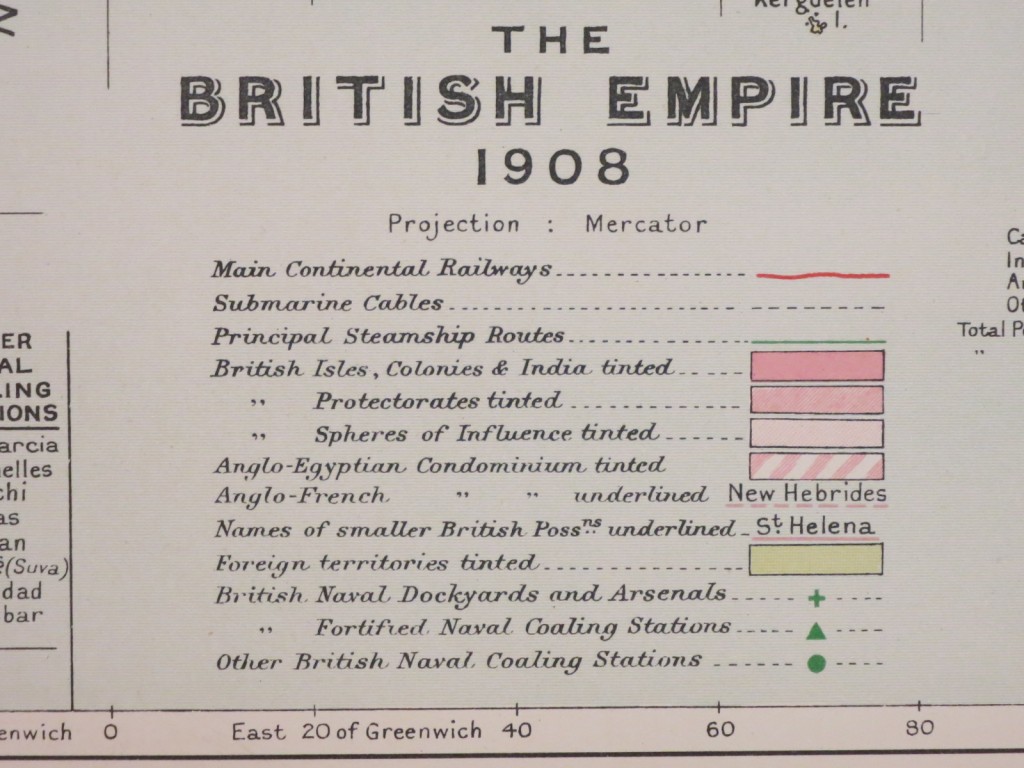 Following a number of maps of continents and thematic world maps, each part of the British Empire is treated by a 2-page display that includes a general map of the area; a shaded relief map at the same scale; maps showing products and industries, climate, and population density; sketches or photographs of landscapes, plant and animal species, and native peoples; and statistical information. 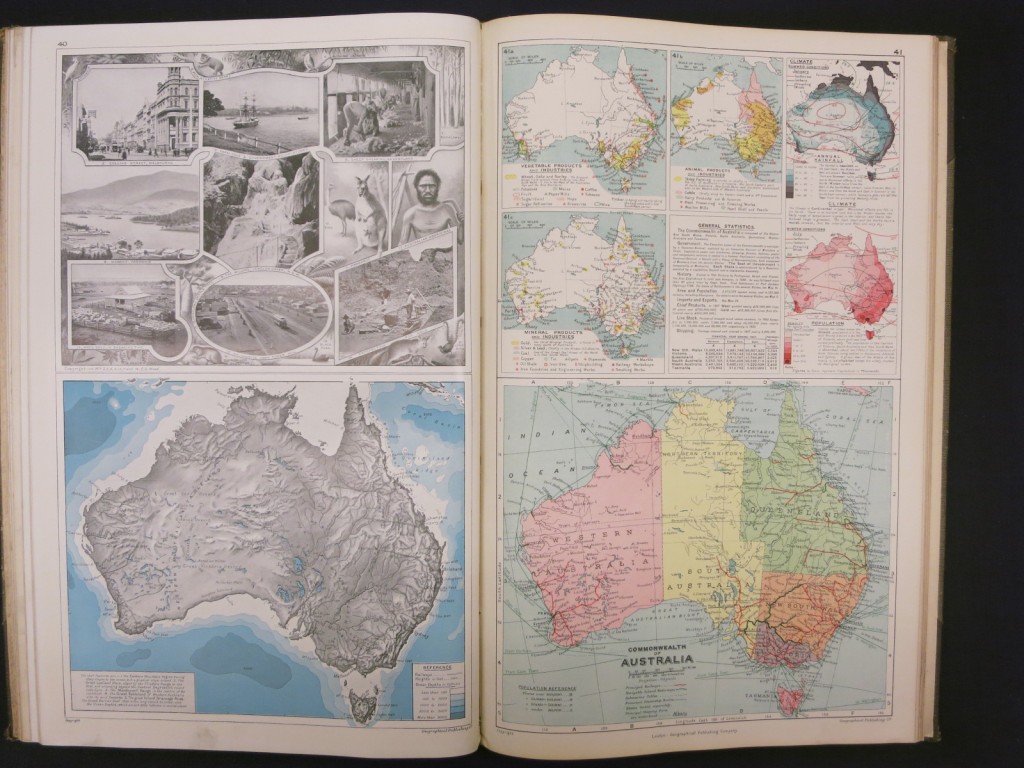 Interestingly, the Japanese Empire is treated in exactly the same way as the British possessions!! Just two pages of maps and illustrations, no additional information about territories or possessions. 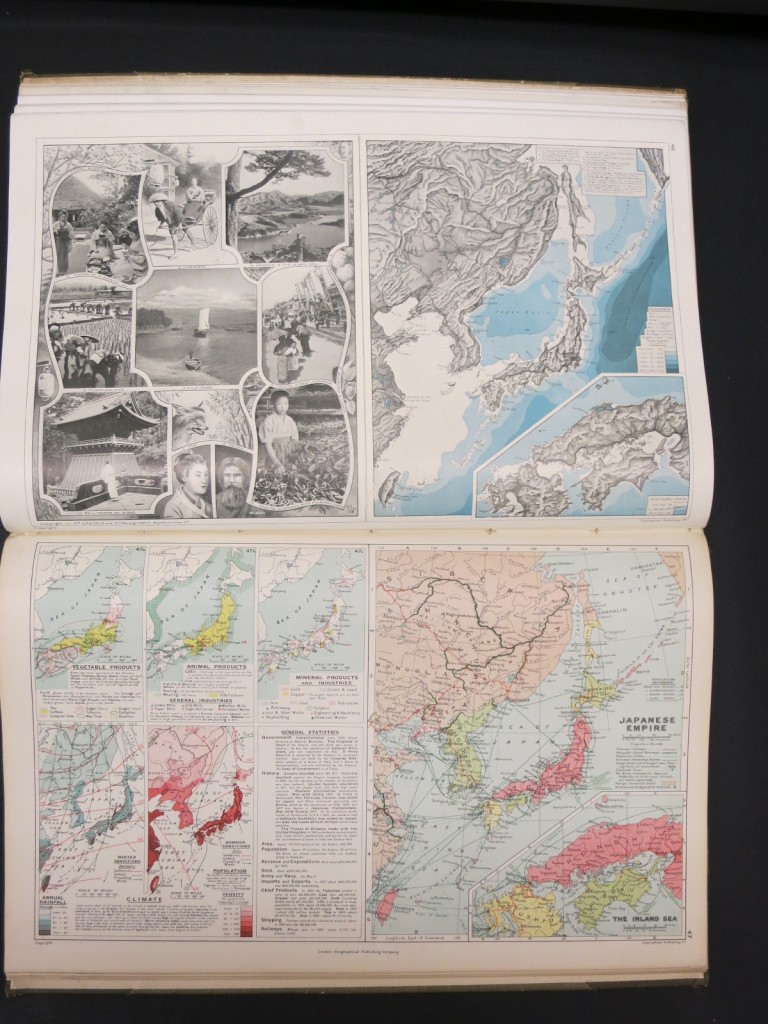 The Deutscher Kolonialatlas by Deutsche Kolonialgesellschaft (German Colonial Society) is a much smaller work. Published in 1896, the pamphlet-like atlas contains 7 maps and and brief text descriptions. 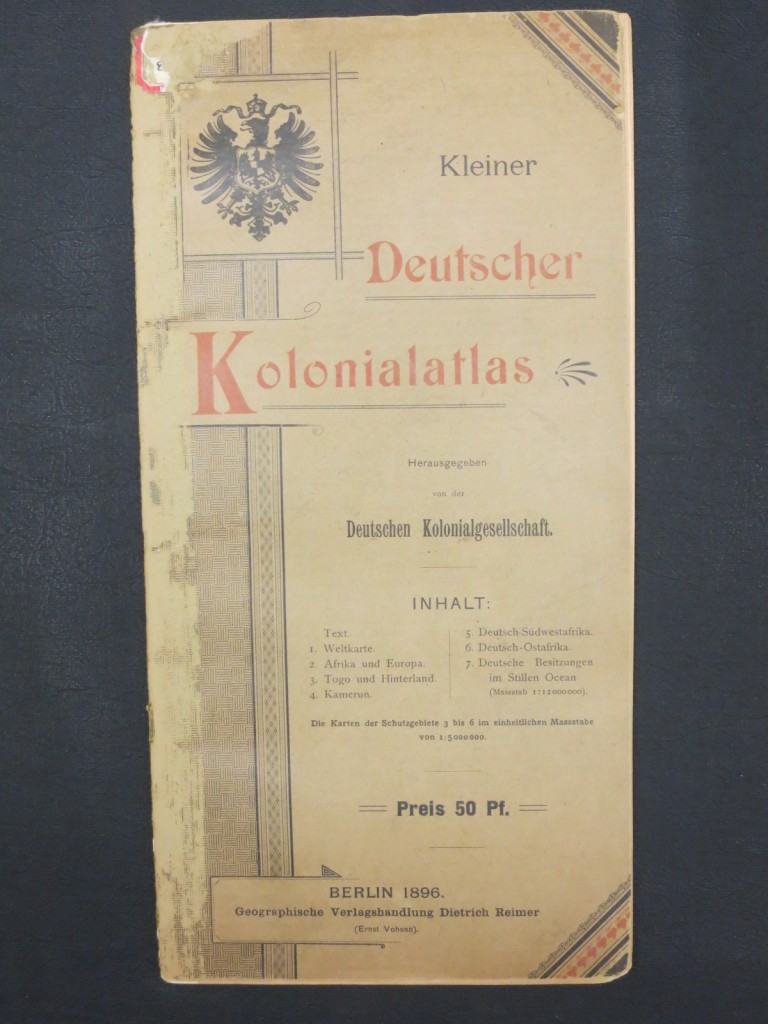 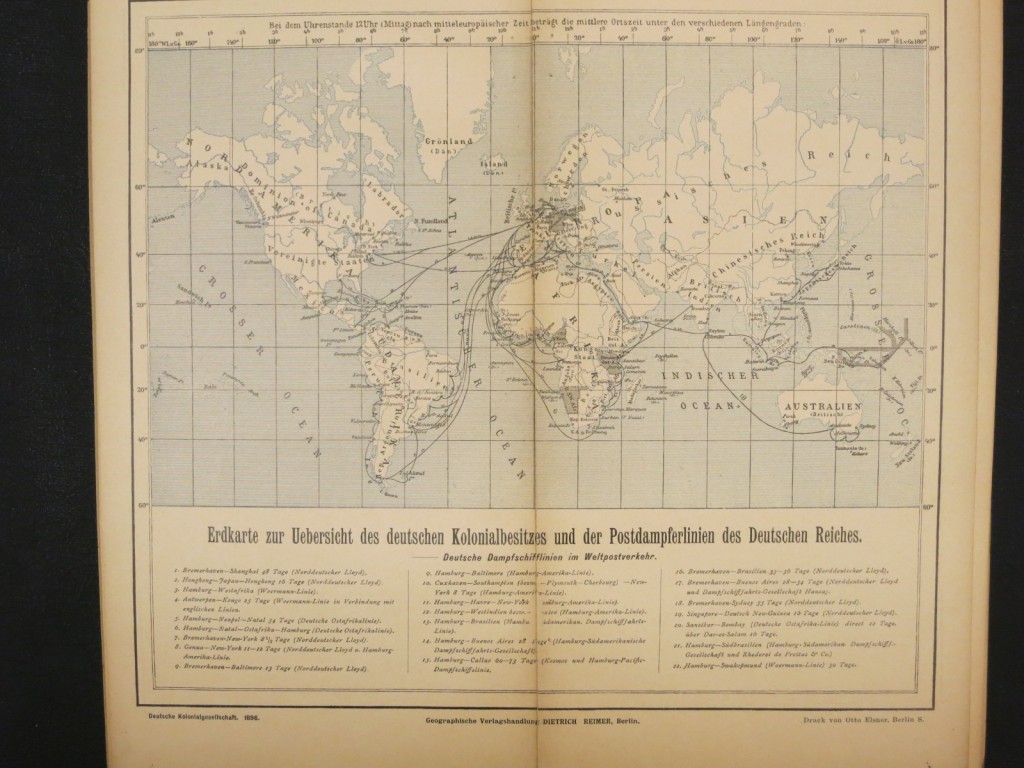 It is followed by a map of Africa and Europe, again highlighting German colonies and steamship lines; 4 maps of areas within Africa, and a map of German possessions in the Pacific. 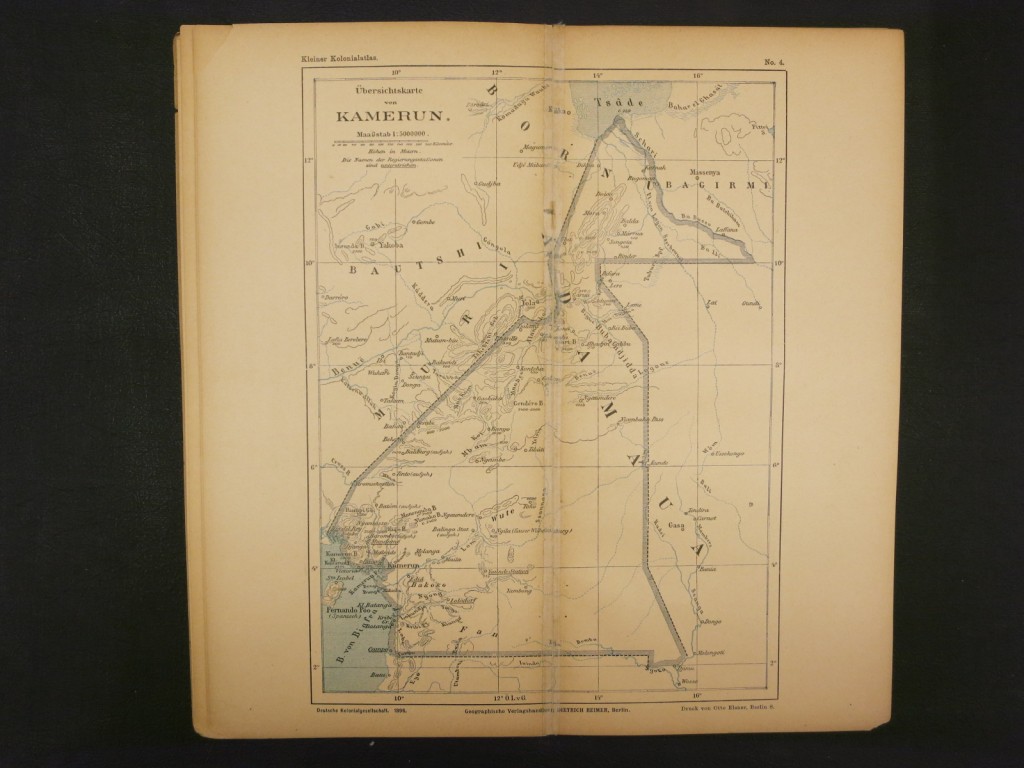 The 1900 edition of the atlas is much the same with one additional map showing east China, Japan and Korea, including an inset map highlighting the area leased by Germany around the China’s Jiaozhou Bay (a 99-year lease similar to Britain’s lease of Hong Kong). 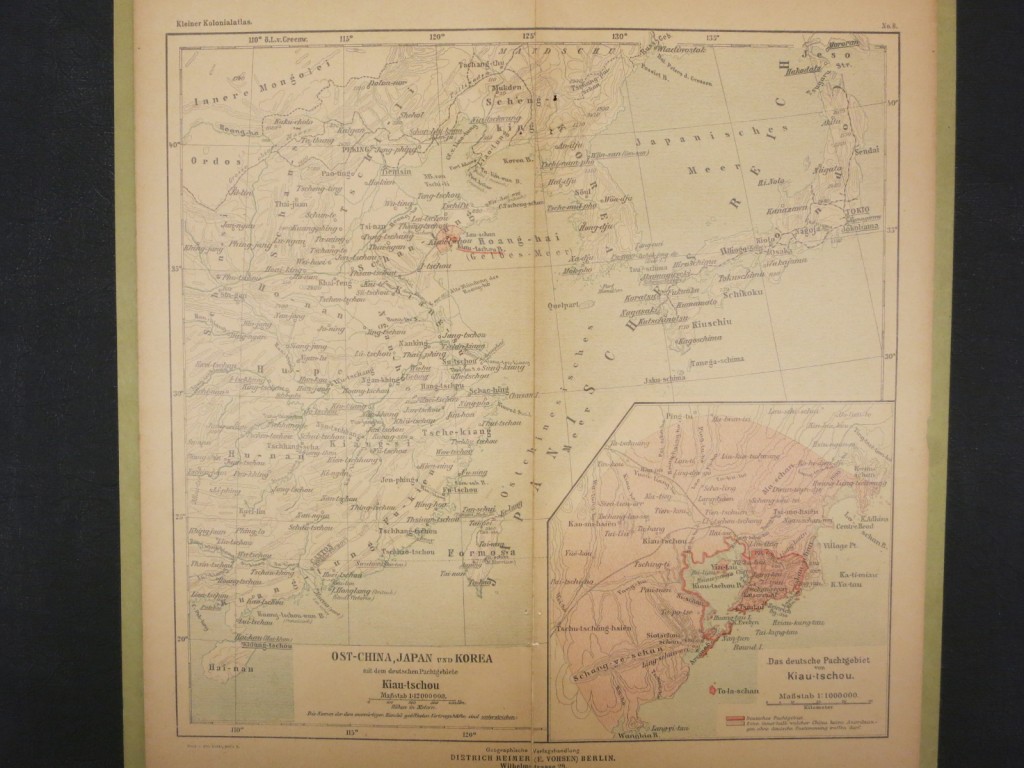 Atlas Colonial Francais was published in 1929 by L’Illustration, a weekly Paris newspaper. 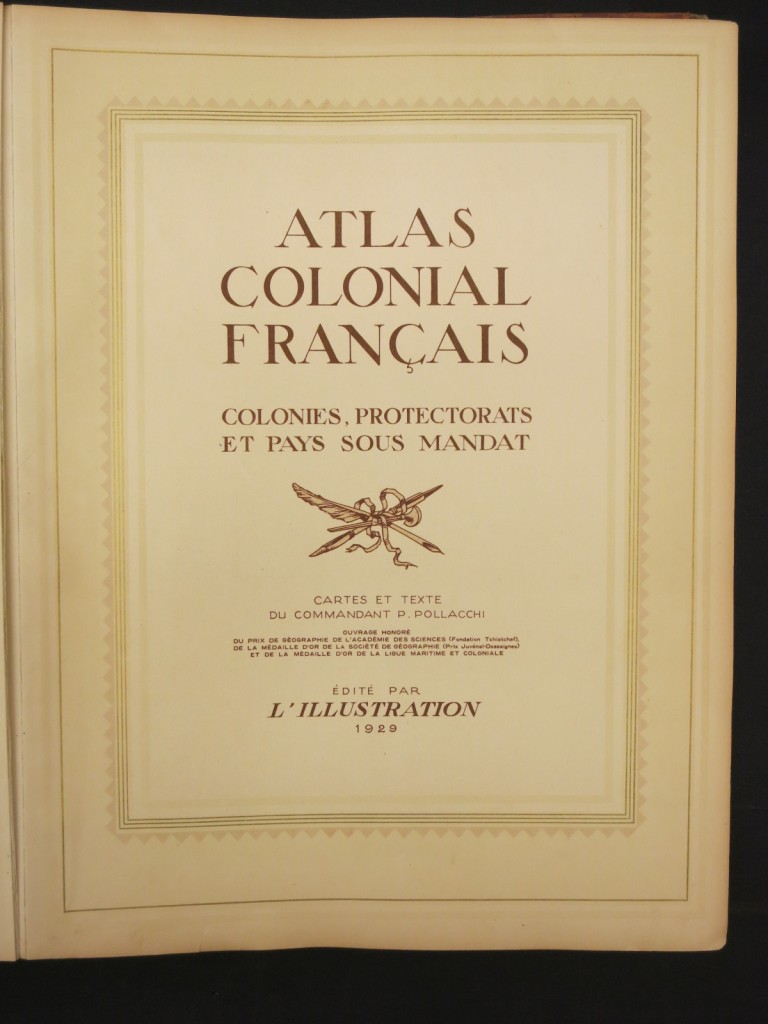 The atlas contains extensive text sections, illustrated with many photographs, describing French colonial history, France, and France’s colonies. Because of France’s long colonial history, events are described very briefly. The sale of Louisiana to the United States is described as “Le Premier Consul vend la Louisiane aux Etats-Unis.” at the end of a brief, three-sentence paragraph describing events in 1801 and 1803. 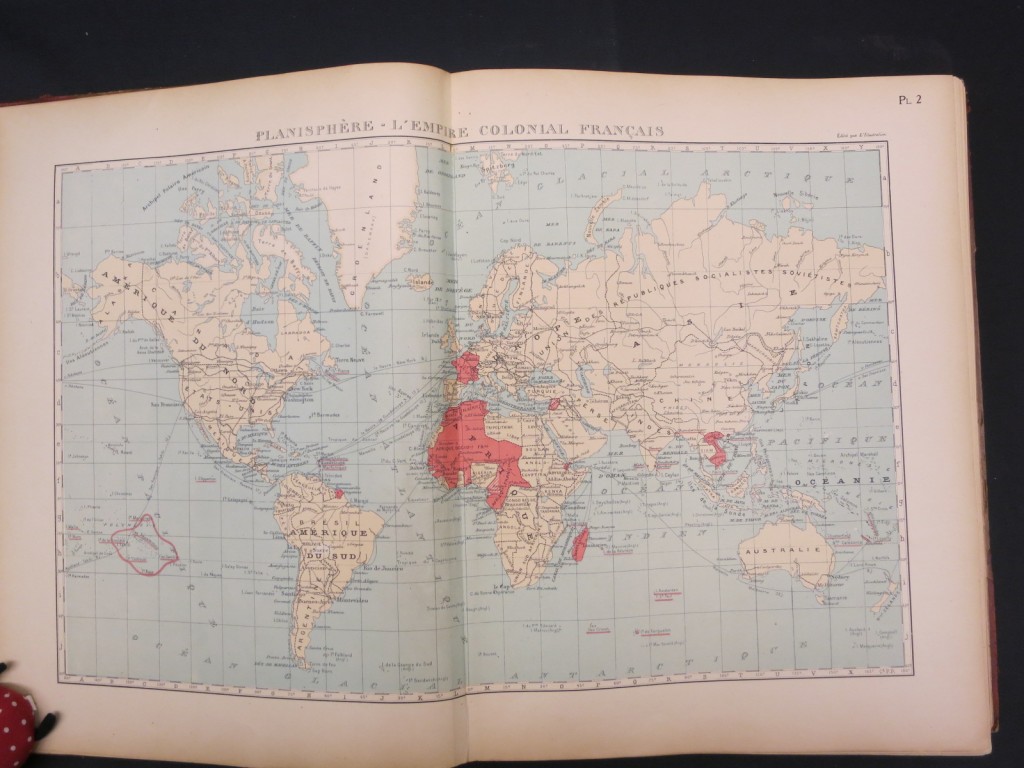 Of the 56 maps included, many double-paged, 5 are of France or the French Empire during different eras, 34 cover areas in Africa, 10 show areas in Asia, 4 colonies in the Americas, and 3 French-controlled islands in the Pacific. Some areas have just a single general map, perhaps with inset maps of the largest towns. Others, such as French Equatorial Africa, Madagascar, and Indochina have 2 or 3 maps, general, physical, and economic. 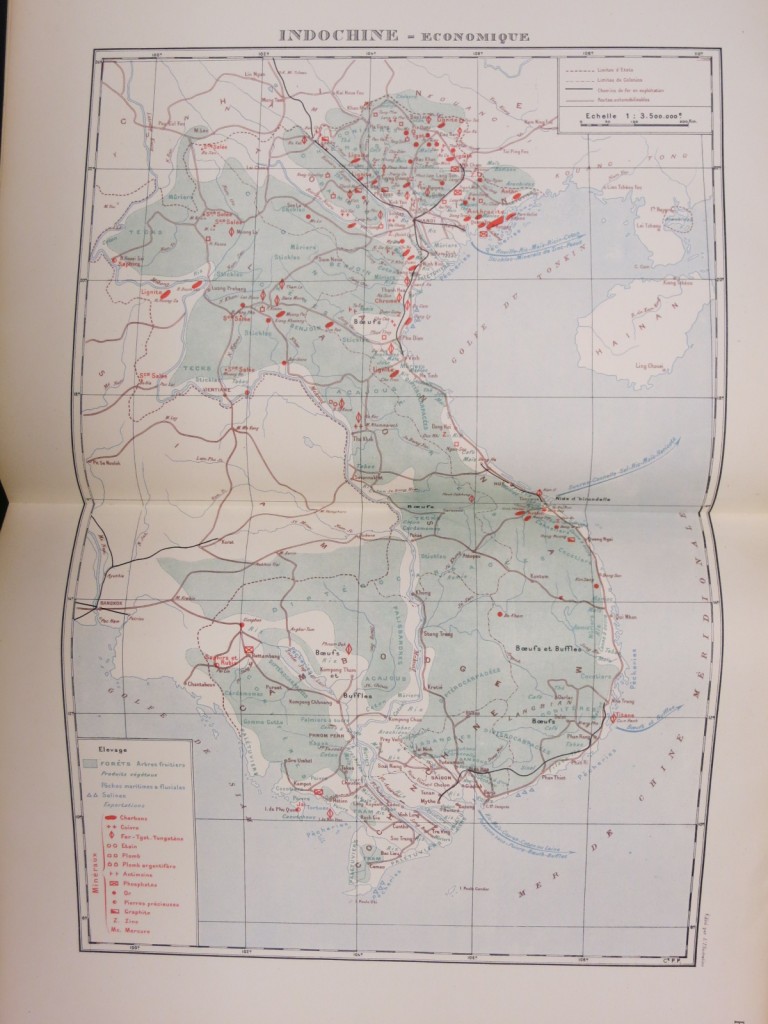 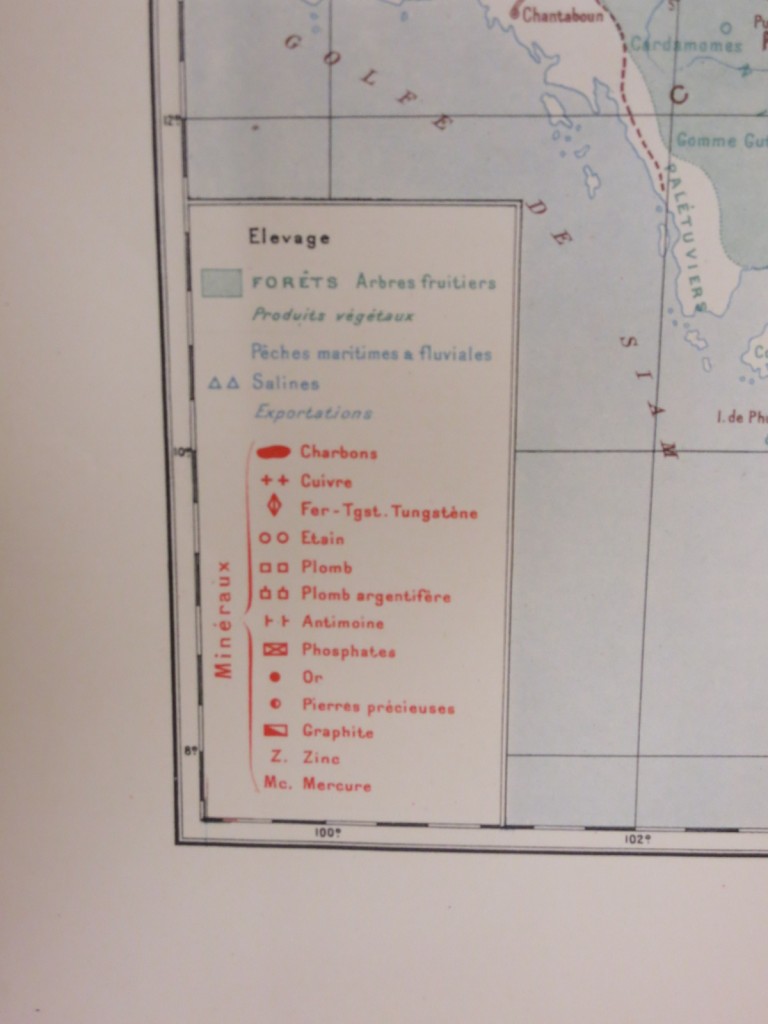 The United States also has a strong and long history of imperialism. The extended title on the title page of the Pictorial Atlas of the Greater United States and the World twice uses the word “possessions” to describe some of the areas covered. 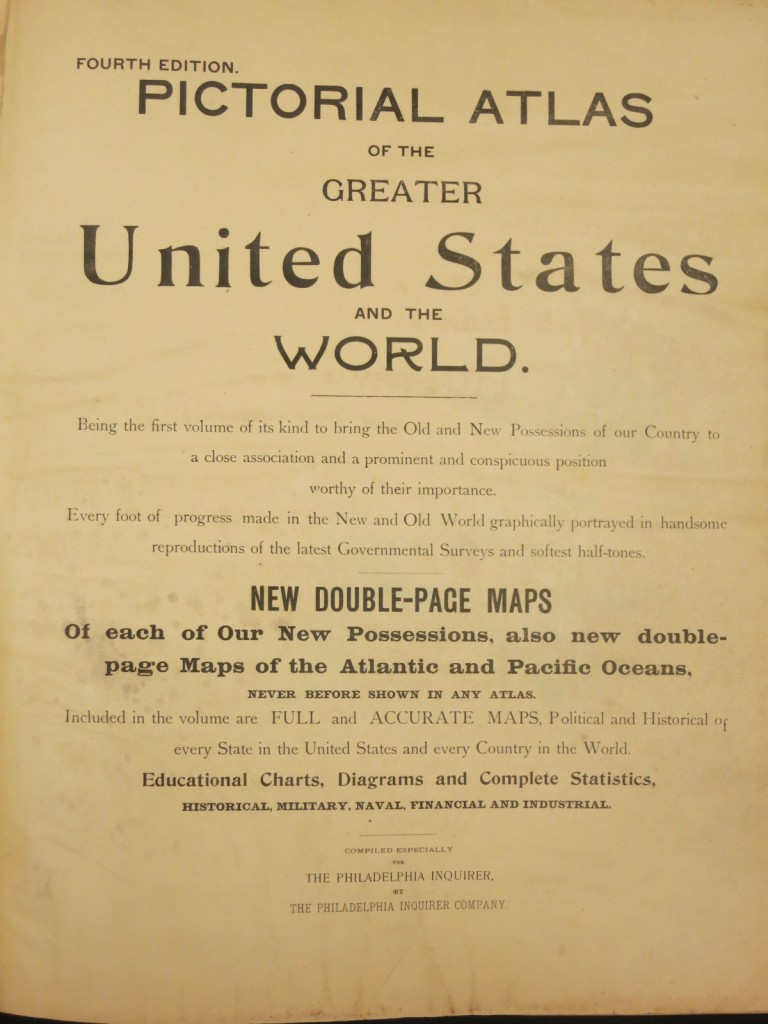 The part of the table of contents that lists map page numbers for states and territories of the United States includes both the Philippine Islands and Puerto Rico. Both had been ceded to the United States by Spain by the 1898 peace treaty ending the Spanish American War, and both appear, along with a maps of the East and West Indies, between maps of Alaska and Hawaii. 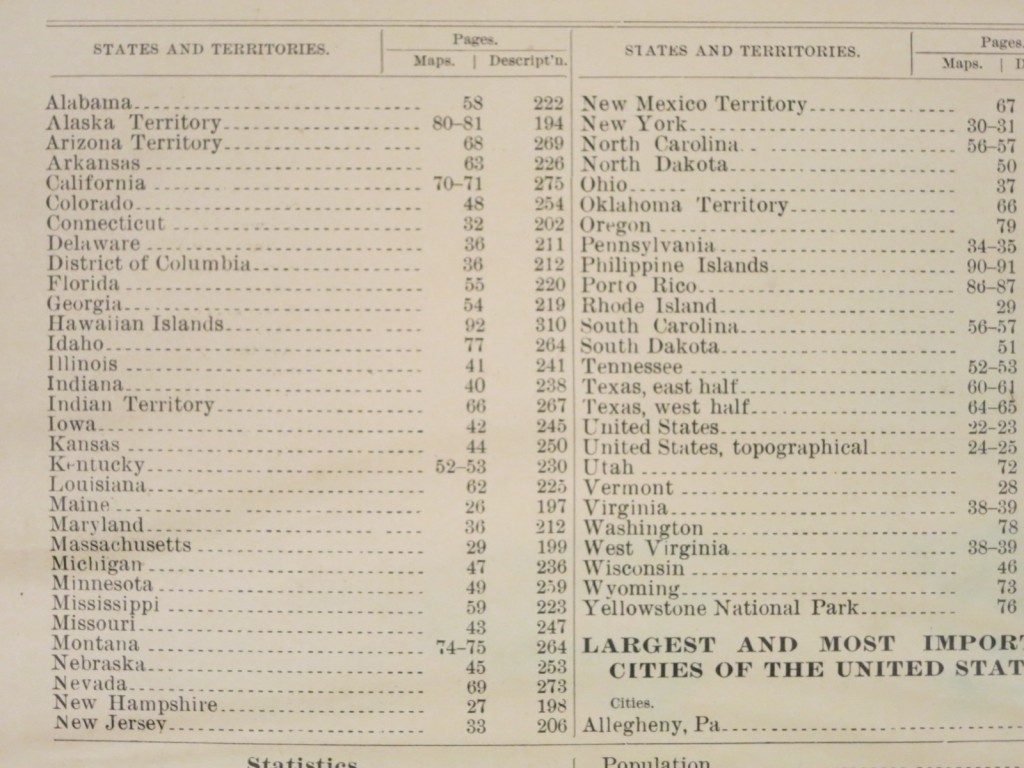 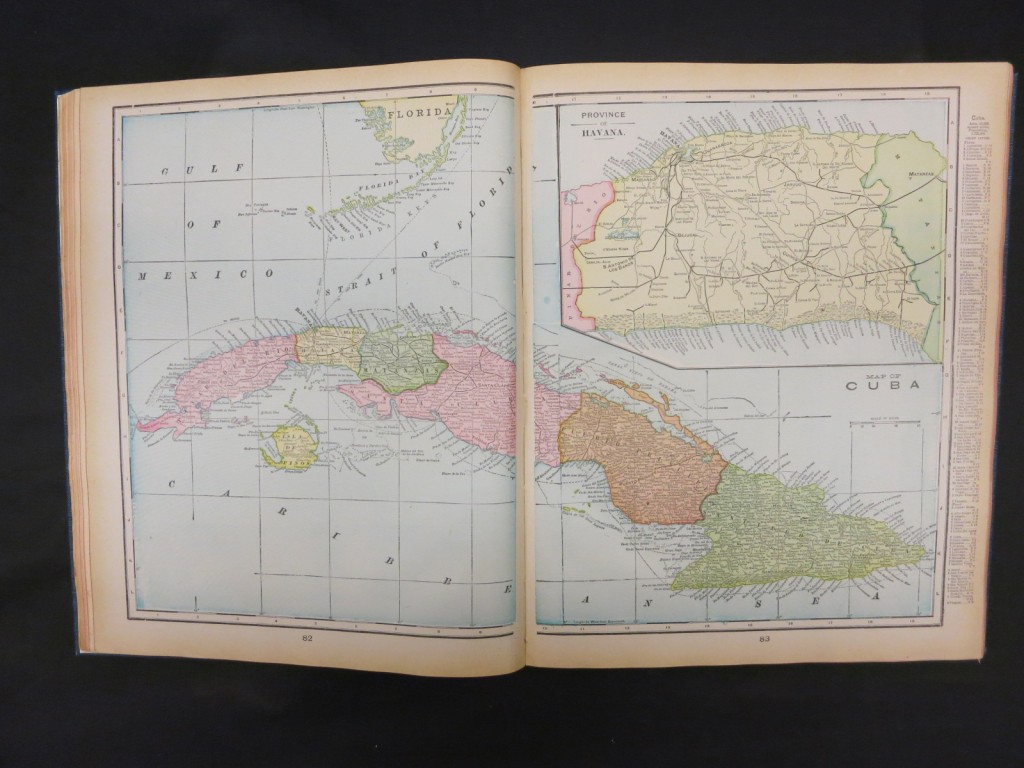 None of the islands claimed by the United States through the 1856 Guano Islands Act, which created a far-flung empire of agricultural-support resources, are identified as United States territories.