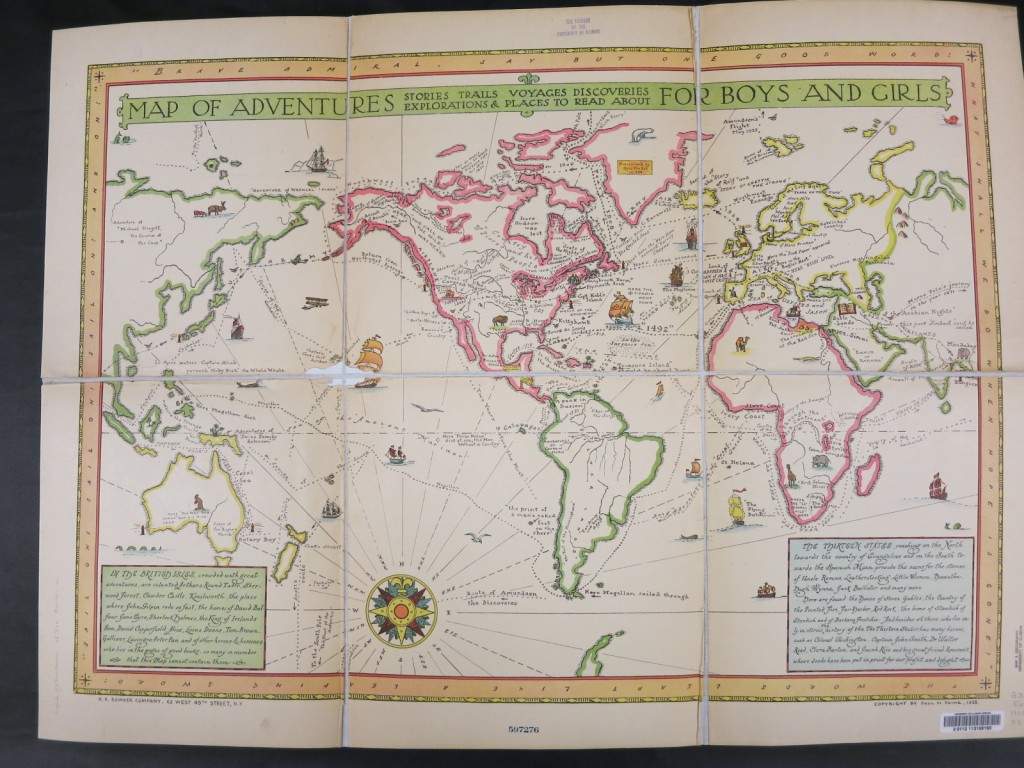 Last week, we discovered the delightful Map of Adventures for Boys and Girls in the University Library’s Main Stacks. Created by Paul M. Paine and published in 1925, this map shows locations of real life and fictional adventures. Sea routes of great explorers criss-cross the oceans, and Paine identifies locations for the Swiss Family Robinson (Papua New Guinea) and a probable location of Treasure Island (in or near the Leeward Islands). The map’s readers are expected to have some knowledge of literature; Robinson Crusoe’s island is labeled with a quote from the book — “the print of a man’s naked foot on the shore.”

The map is illustrated with small sketches of animals and ships. 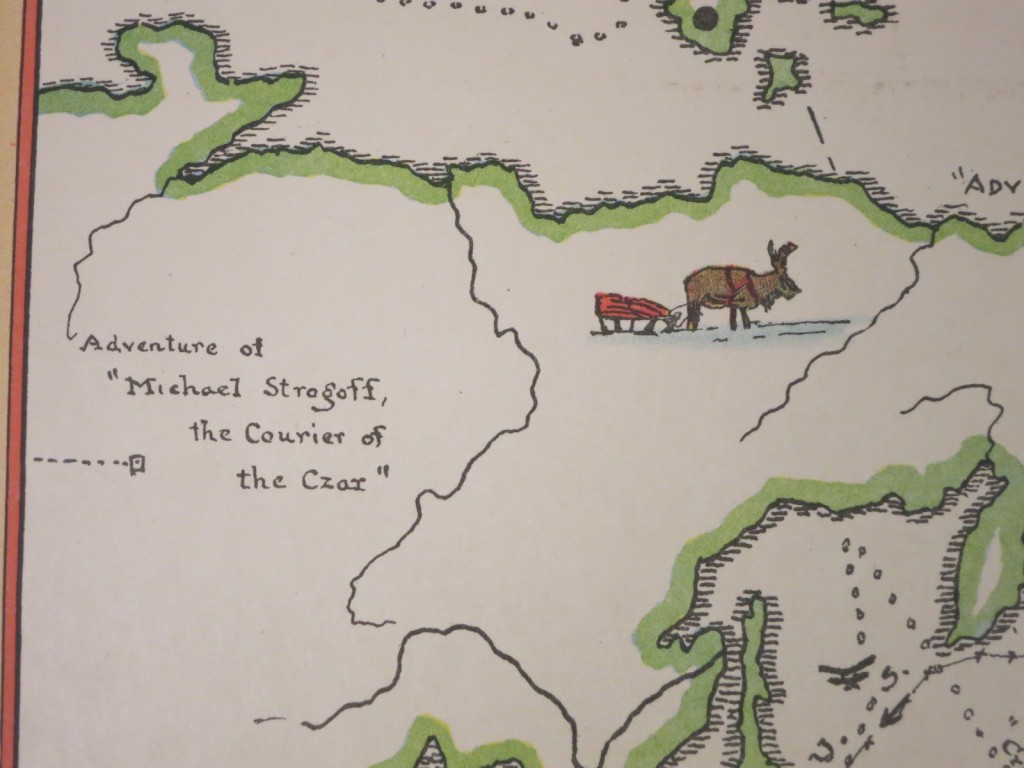 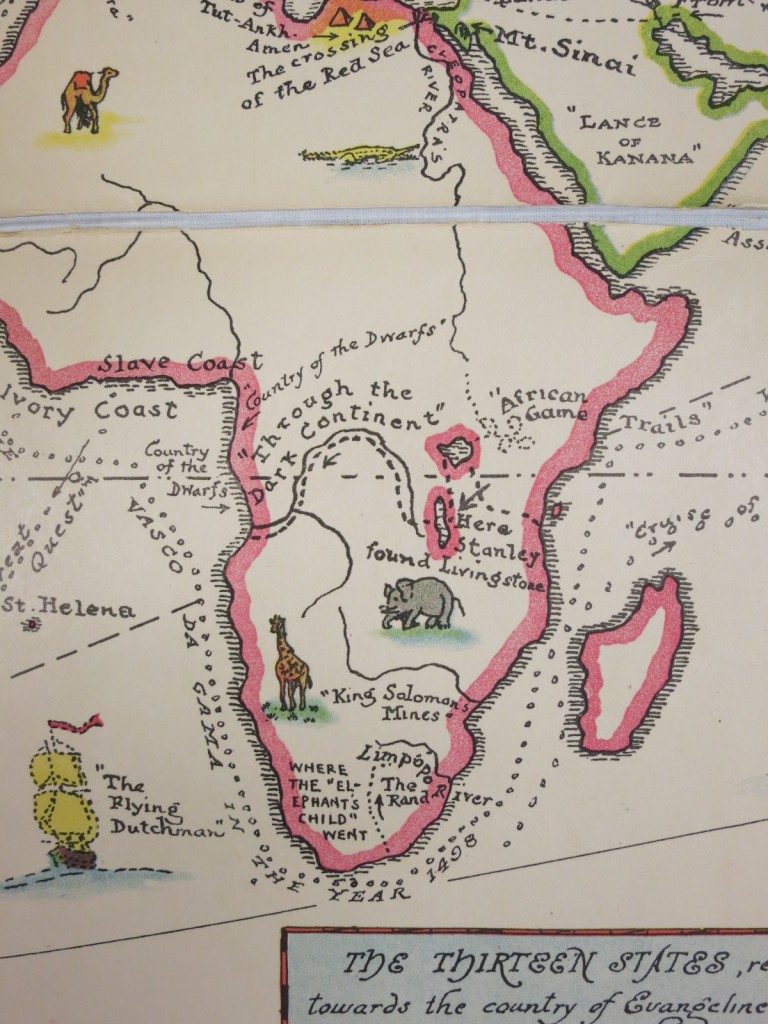 Map users need to be aware that real locations might not be correctly placed. On the portion of the map showing the eastern United States, “A. Lincoln’s City” appears to be located in Ohio! 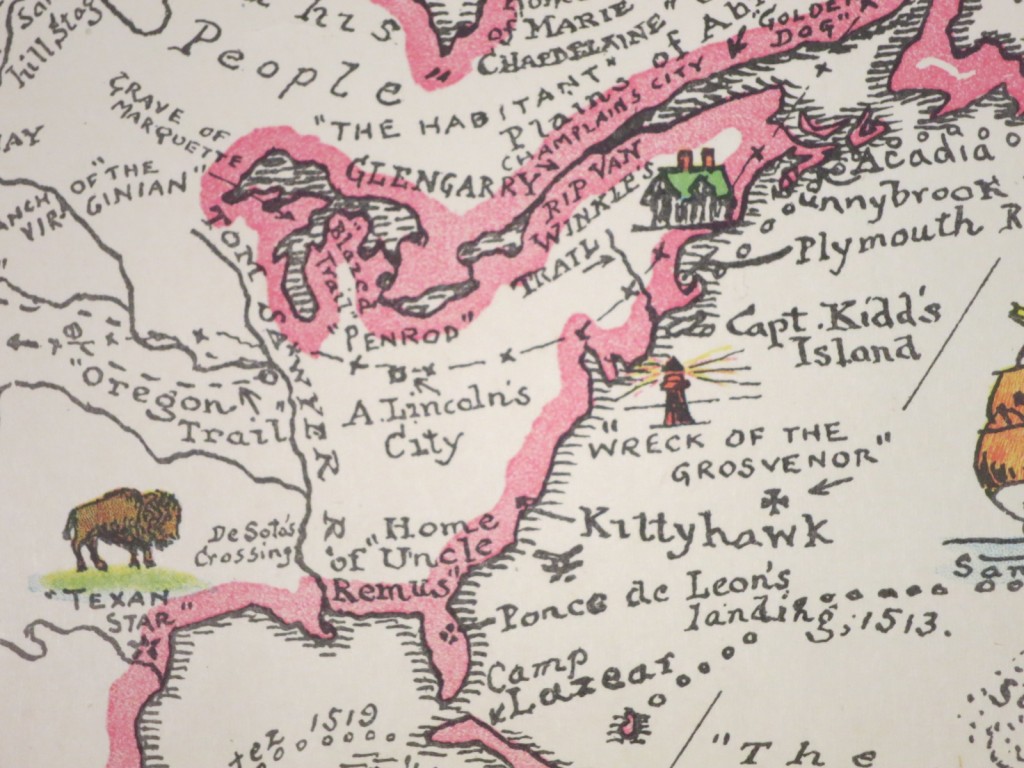 The Map Library has another literary map by Paine,The Booklovers Map of America. Paine incorporates names of authors associated with locations, locations of literary works, and small illustrations. 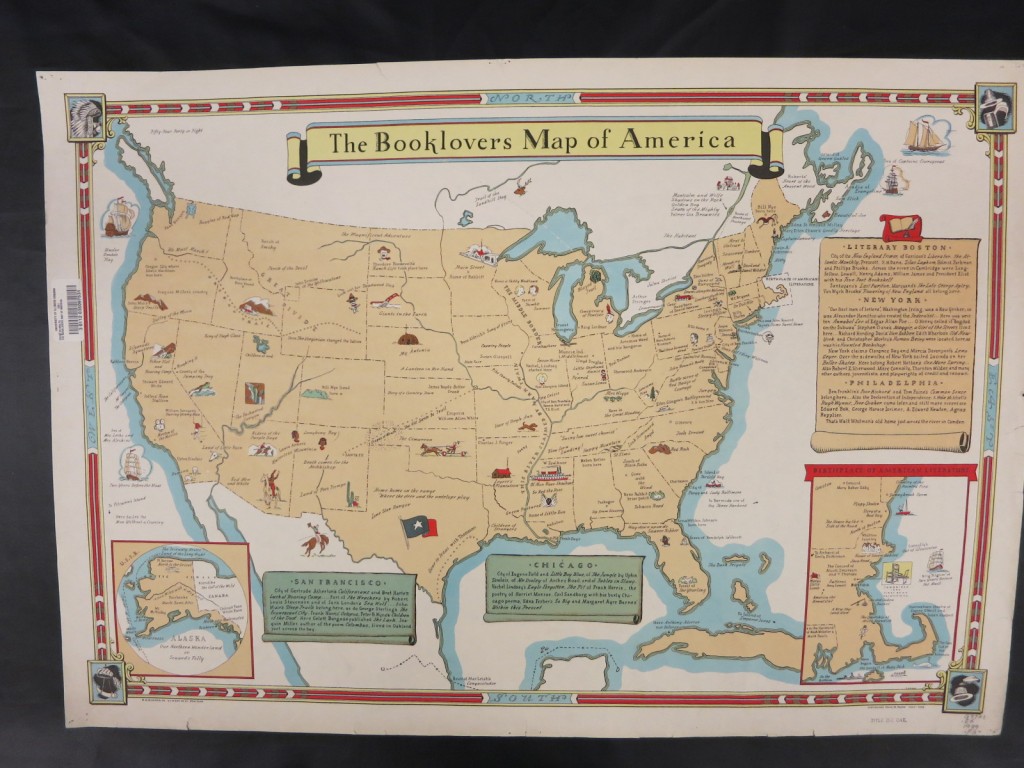 Ten years later, Booklover’s Map of the United States was published. Like Paine’s map, author and work locations are identified, many with illustrations. The creator of this map, Amy Jones, also drew The World in Storybooks, published in 1946. 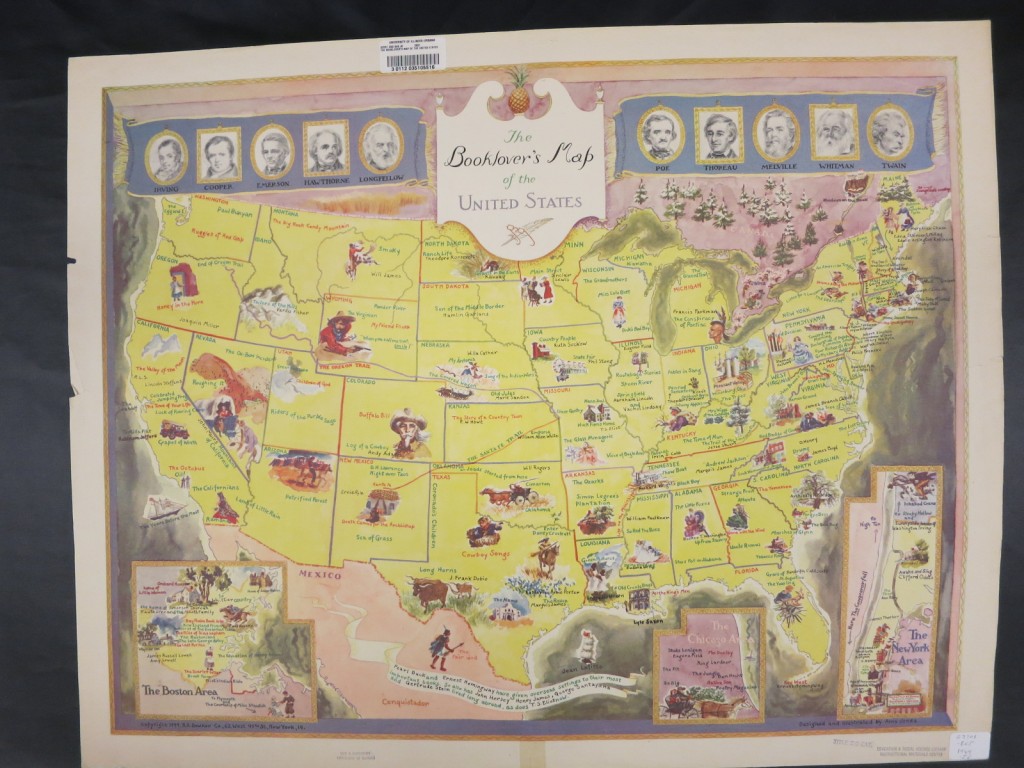 Some literary maps celebrate the work of a single author. A Map of Sinclair Lewis’ United States locates principal places in Lewis’ works. The map was published 4 years after Lewis had been awarded the Nobel Prize for literature and was intended to promote Lewis’ works published between 1914 and 1934. 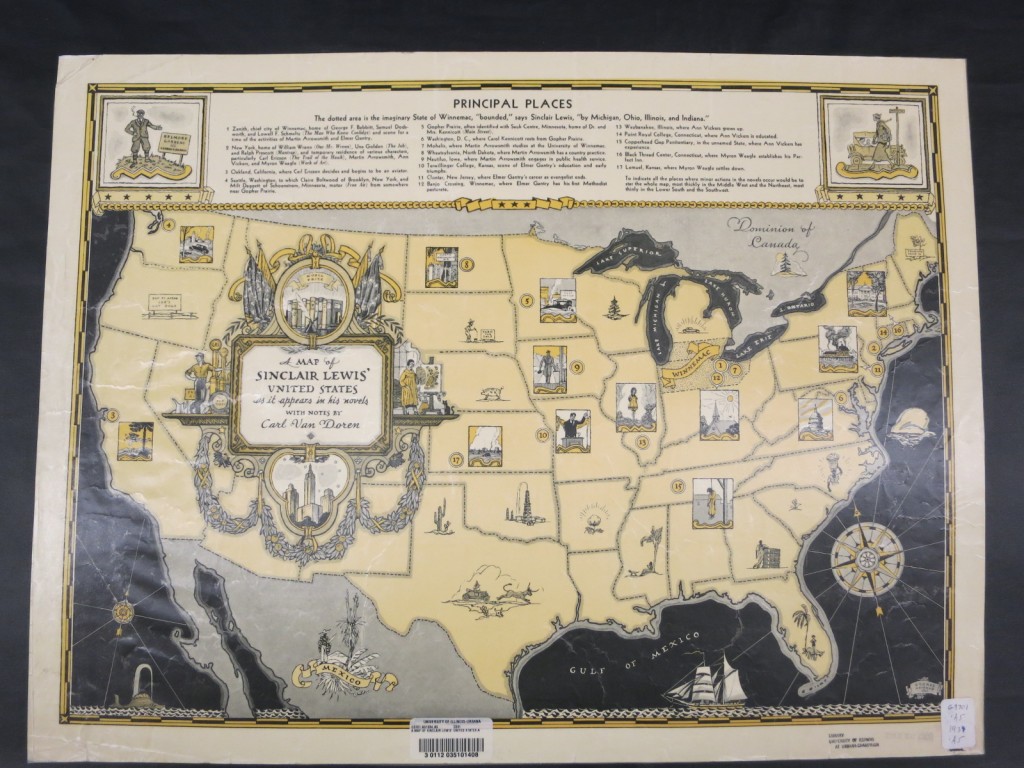 The Adventures of Mark Twain also was produced as a promotional item; it ties in with the Warner Brothers movie with the same title staring Fredric March as Samuel L. Clemens. The map is heavily illustrated with sketches depicting events in Clemens’ life and works. Surrounding the map are stills from the movie. Published in 1944, the map is a wonderful propaganda piece promoting an American original, American myths, and the sale of war bonds. 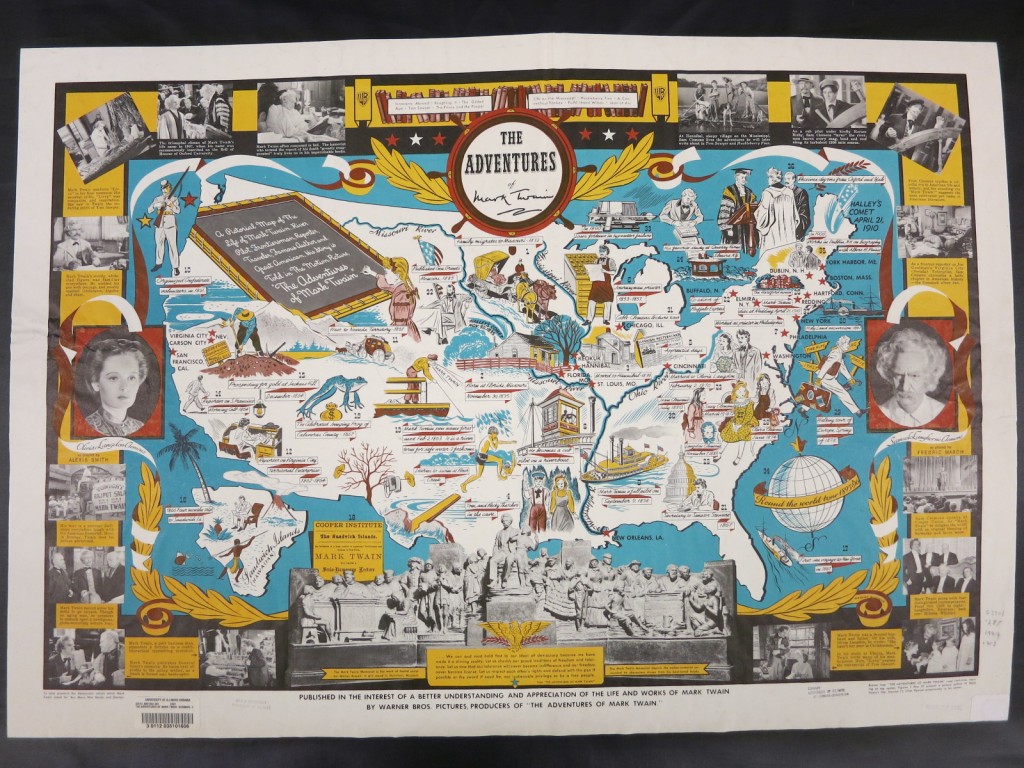 Other literary maps can be found online at the Library of Congress Geography and Map Division’s online exhibit Language of the Land: Journeys into Literary America. The items at this website were part of an exhibit mounted by the Division 1993-1996. The exhibit was accompanied by a book, Language of the Land: The Library of Congress Book of Literary Maps, an annotated and illustrated cartobibliography of more than 200 literary maps held by the Division.