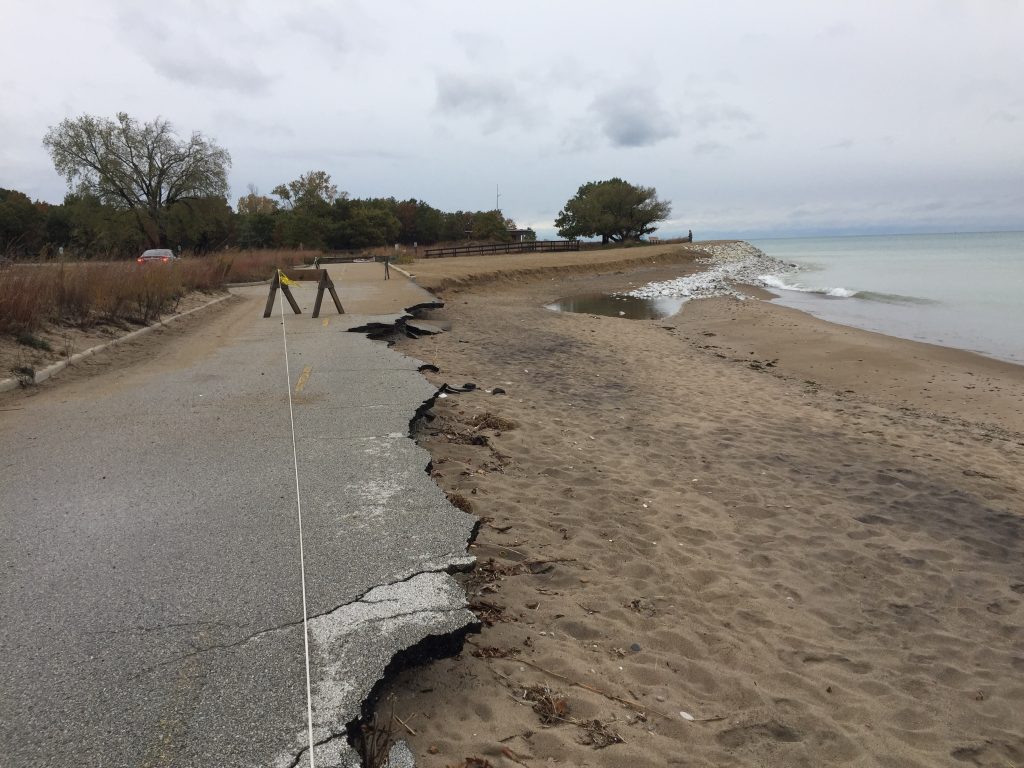 Great Lakes water levels fluctuate because of changes in the volume of water that enters and leaves the lake basin. In Lake Michigan, this is primarily controlled by the balance between precipitation and evaporation. In years with high lake levels, more water is entering through precipitation than is being evaporated.

Storms with large wave heights occur in Lake Michigan primarily during the spring and fall. These storms can facilitate rapid erosion along beaches. The amount of erosion experienced at any given beach from any storm varies based on the geology of the beach as well as the nature of shore protection. 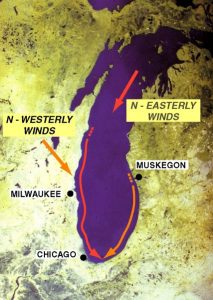 Sediment flows along the eastern and western coasts from the northern reaches of Lake Michigan to the southern shore. The natural action of waves erodes beaches, bluffs, and dunes. Some of the sand remains suspended in the water and is gradually pushed south by the prevailing winds and shoreline currents. When uninterrupted and undisturbed, this littoral transport forms great wide beaches along its path, beginning as far north as present-day Sheboygan, WI and Muskegon, MI. Prior to human alteration of the natural setting, the Indiana coast between Gary and Michigan City was the terminal zone for this littoral sediment.

As water level rises in Lake Michigan, beach, dune, and bluff erosion occur. This is primarily due to the zone of wave influence moving landward with lake level rise. This allows waves to impact higher up the beach and results in enhanced erosion. The sand that is eroded from the beach is either transported offshore and stored in sandbars, or is transported southward in the alongshore current as described in the adjacent image box.

Fluctuations in the lake levels of Lake Michigan are cyclical through time. The historical and geological records of Lake Michigan water levels contain periods of high lake levels and low lake levels. Scientists believe these fluctuations may be related to global climate patterns, such as the North Atlantic Oscillation. Even though we are currently in a period of sustained high lake levels, past data indicates that lake level will again recede to lower levels. Predicting when this exactly will occur is extremely difficult given the complexity of the processes driving water level variations in Lake Michigan.

Geologists at the Illinois State Geological Survey (ISGS), part of the Prairie Research Institute at the University of Illinois at Urbana-Champaign, are actively studying coastal processes in Lake Michigan to better understand what drives erosion and how to protect the beaches.  Dr. Ethan Theuerkauf and his lab (Great Lakes Coastal Geology Research Group) are conducting research to explore how storms, lake level rise, and human disturbance shape beaches and bluffs along Lake Michigan.  These studies utilize new technologies, such as drones, that have never been used in our region to study beach erosion.

Dr. Theuerkauf is applying a scientific approach to addressing coastal changes and hazards that is new to coastal Illinois, yet is common along ocean shorelines. His group studies the processes that shape the coastal system and then utilizes those data to predict future coastal response under varying weather and climate conditions.  This system-level approach allows for a more complete understanding of the interaction between coastal processes (e.g. storms, lake level, shore ice) and coastal response (i.e. beach, bluff, and lakebed erosion and accretion), which is imperative for proactive coastal management.

More information can be found here: