Excavation Monitoring via Drone or UAV 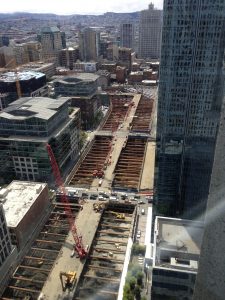 Collaborative Research: A Joint NU-UIUC Project for the Development of New Integrated Tools for Predicting, Monitoring and Controlling Ground Movements due to Excavations

This collaborative research project aims to develop new, integrated tools for predicting, monitoring, and controlling ground movements associated with excavations in urban areas. The project is a joint venture between Northwestern University and the University of Illinois at Urbana-Champaign.

The project will explore and develop new technologies that offer substantial promise for greatly enhancing the construction control process and attendant mitigation of ground deformations including: (1) field instrumentation and sensors with wireless communication capabilities, (2) data storage and display, including the display of construction progress and ground and building movements in a virtual reality environment, and, (3) intelligent, self-updating numerical models to simulate the excavation and support process and to compute anticipated ground and structure movements. These new technologies and improvements will be field tested in real time during excavation projects.

We use a novel, powerful and systematic method to calibrate the constitutive model of the soil behavior directly from field measurements. We will apply the autoprogressive method; a neural network based methodology that has been proposed by Ghaboussi and his co-workers, to the modeling of staged construction for a deep braced excavation. A neural network (NN) material model represents the constitutive model of the soil behavior and will be calibrated using laboratory test and observed field behavior of excavations. Initially, the proposed methodology will be applied to synthetically generated “field measurements” from numerical simulations of deep excavations. The approach will potentially greatly enhance the numerical modeling of geotechnical problems. Field observations and “local experience” can then be directly and systematically incorporated into numerical models.

Measured Performance of Excavations and Jacked Tunnels for the Boston Central Artery/Tunnel Project
Sponsor: Federal Highway Administration
Y.M.A. Hashash, E.J. Cording
The Central Artery/Third Harbor Tunnel Project, currently under construction in Boston, Massachusetts, is the largest public works project currently underway in the United States. The project includes placement of the highway below the ground and involves the construction of deep excavations using diaphragm walls and the largest jacked tunnels in the world below operating railway line. The research project use the electronic instrumentation data base in conjunction with information that will be collected on significant construction stages to develop an understanding of the behavior of the diaphragm wall supported excavation systems and the Jacked Tunnels for CA/T.

Hashash, Y.M.A. and A.J. Whittle, Mechanisms of Load Transfer and Arching for Braced Excavations in Clay. Journal of Geotechnical and Geoenvironmental Engineering, 2002. 128(3): 187-197.