The Mortenson Center, Dr. Valeda Dent, and the Importance of Rural Village Libraries in Uganda

By Mia Adams on December 17, 2018 in Uncategorized 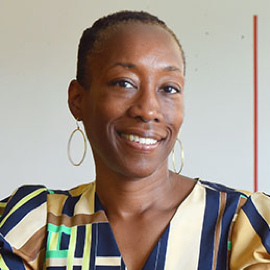 In her presentation titled “Evaluating the Impact of Rural Village Libraries in Uganda: A Mixed-Methods Narrative”, Dr. Dent went into detail about her research on Rural Village Libraries (RVLs) and their impact on people in Uganda. Dr. Dent’s journey began when a librarian from Uganda enlisted her expertise to gage how a rural village library was being received and utilized by local patrons. Twelve years later, Dr. Dent is still conducting research on how RVLs are being used to bridge gender gaps, encourage literacy, empower democracy, and catalyze economic change.

Dr. Dent spoke at length about an idea she calls the “humanitarian effort”. She explained that we, as humans, feel an urgency to help others less fortunate than us. But as westerners, often we neglect to take issues of sustainability into consideration. Often we assume problems in the developing world have simple solutions and we believe these problems can be solved simply by hosting a fundraiser or collecting materials. But in response to this, Dr. Dent implores us to remember that many problems developing countries face are deep-rooted in complex social, cultural, and/or political constructs that often take years to understand and uproot.

Dr. Dent mostly discussed how her research has evolved over time. Initially, she believed her question revolved around how RVLs were being used to add literacy, and she looked into how RVLs help to prepare young children for school. But unexpectedly, she discovered there were underlying trends overlapping the following eight categories:

While an analysis of any one of these categories could easily stand on its own, Dr. Dent believes they all come together under the umbrella of RVLs. While RVLs have had a longer time to come to fruition in West Africa, examples from East Africa can still be found. RVLs in Uganda are typically used to hold supplemental materials for secondary school children. This provides a unique dynamic, because most of the books are in English. But Dr. Dent’s research shows that despite the lack of materials in local languages, numerous individuals from the community will come and use the library. Many children venture to Kitengesa (one of the libraries observed by Dr. Dent) with older family members, and even though they cannot read yet, they see their parents, grandparents, or siblings reading, and they mimic the action. This frequent visiting and mimicking leads young children to develop an appreciation for the library and reading, to develop reading skills more efficiently, and to increase school readiness. Also in her research, Dr. Dent has discovered that in many communities, libraries are the only safe space for girls; libraries provide a place for girls to exist free from harassment and abuse, and when given a place where they can be themselves, young girls are free to learn and dream. Especially in rural areas where girls are exposed to more traditional gender roles and expectations, RVLs are being utilized as a space where women can feel empowered and girls can seek to learn what and how they want.

On a more general note, Dr. Dent referenced Nancy Kranich’s book Libraries and Democracy: The Cornerstones of Liberty within this discussion, suggesting that libraries can lead to democracy. Little research has been done in East Africa relating to these assumptions. But the overall increase of literacy, as seen through the introduction and sustainability of RVLs, suggests that if people are literate, they are more likely to involve themselves in the democratic process. If people are illiterate, they often assume they have no power, or that they can have no influence on policy or politics. Overall, RVLs around the world are largely overlooked because of their size or their contents. But as seen through the extensive research Dr. Dent has been involved with in the last decade, RVLs are doing a lot more than they are given credit for. RVLs provide an environment for children and adults to learn. But even more than that, RVLs provide a space where secondary students can feel encouraged, women and girls can feel free, and everyone can feel as though they can have a hand in politics, economics, or education.

If you missed the event, and would like to listen to the lecture, you can find a recording of Dr. Dent’s presentation on the Mortenson Center website. Just go to the Event Page using the link below, and click “Watch The Recorded Lecture”.

If you are interested in learning more about how RVL projects are being utilized on the continent of Africa, you can visit the “Friends of African Village Libraries” (FAVL) website that focuses on libraries in Ghana, or the East African branch of FAVL called “Uganda Community Libraries Association” (UgCLA) that focuses on Uganda.

If you are interested in learning more about Dr. Dent or her research, you can visit her faculty page at St. John’s University or her Academia page.

Dent, Valeda Frances. “An Exploratory Study of the Impact of the Rural Village Library and Other Factors on the Academic Achievement of Secondary School Students.” ProQuest LLC, 2012, pp. 1-210.

_______________. “The Intergenerational Impact of a Rural Community Library on Young Childrens Learning Readiness in a Ugandan Village.”