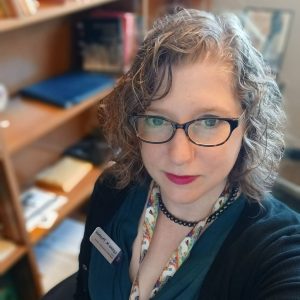 University Library’s own Lynne M. Thomas has been recognized as a finalist for the Hugo Award for Best Semiprozine for her work in Uncanny Magazine, for which she is the co-editor-in-chief and co-publisher with her husband, Michael Damian Thomas. In addition, Lynne M. Thomas is the head of the Rare Book & Manuscript Library and has won the Hugo Award nine times; she has been a finalist 20 times for the award since 2011, along with being a finalist multiple times for World Fantasy Awards and Locus Awards.

Lynne M. Thomas was nominated and recognized for her semiprozine, which is a periodical publication within science fiction and fantasy. The voting process occurs in two phases, where the first phase is a nomination, and the second phase ends with a vote on a final ballot. Those nominated can be anyone who has had a Supporting or Attending membership in the current, or previous, World Science Fiction Convention as of January 31, 2022.

Commenting on this accomplishment, Thomas expressed, “We are absolutely thrilled to have the work of Uncanny Magazine, our team, and so many of the contributors to the magazine recognized by the Hugo Awards voters.”

A relatively comprehensive list of her awards is found here and awards and nominations for work published in Uncanny Magazine can be found at the bottom of this page: https://www.uncannymagazine.com/about/.

For more information about the Hugo Award, visit https://chicon.org/home/whats-happening/hugo-awards/.