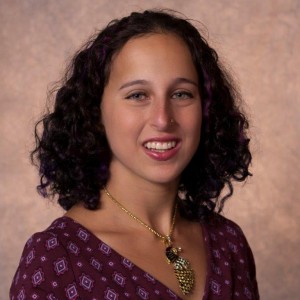 When asked about her reaction to the award, Thacker expressed that she was “really flattered and excited, because sometimes we’re such a big library it’s easy to feel anonymous. So to know that somebody had to be proactive, and write a letter of recommendation based on your work… even just being nominated is an honor, just to know that somebody respects the things that I do!”

Each year, Library Journal selects a group of ‘Movers & Shakers’, an award for which they select nominees who are “innovative, creative and making a difference.” Thacker joins the 16th annual cohort. International & Area Studies Library Head Steve Witt noted, “Mara’s innovative and creative approach to area studies librarianship comes at a point when the field is moving from a focus largely on collections to an emphasis on engaging user services. Mara has been successful at both helping to develop unique collections and introducing students and scholars to the importance of the intellectual domains they represent.”

JoAnn Jacoby, Associate University Librarian for User Services at Illinois also offered her praise for Mara: “In a word, Mara is engaged. Just a few years into the profession, she is already fully engaged in her professional network and has established herself as a leader by building community and inspiring new ideas that have already begun to reshape the landscape of area studies librarianship. Likewise, the passion and energy she brings to reaching out to students and scholars is the model of engaged librarianship. She is a vital part of the South Asian studies community on campus, hosting events and contributing to conversations that inspire scholarship and discovery.”

Thacker first found her love for South Asian Studies as an undergraduate at the College of William and Mary before moving on to the University of North Carolina to obtain her degree in Library Science. She studied abroad in India as an undergraduate, and received several Foreign Language and Area Studies Fellowships as a graduate student to further her studies in the Hindi language.

In recent years, Thacker’s involvement at the University Library has focused around contributing to the broader community with events and engagement to allow more people to interact with the International Studies topics she holds so dear. Thacker sees this outreach as vital because “…we [as subject specialists] have the opportunity to bridge the social and academic environments on campus, so doing engagement activities also allows us to fulfill the land grant mission, to contribute to democracy and societal good, but it also allows us to spice up the coursework and research of the academic lives of the people on campus.” Her most recent projects have included development of a South Asian comic collection, and the Chai Wai cultural salon series that is ongoing at the University Library. Thacker was recently re-elected to serve on the Executive Board of the Committee on South Asian Libraries and Documentation (CONSALD), the major professional organization for South Asian studies area specialists.

The 2017 Movers & Shakers were selected by the editors of Library Journal. Each of the Movers & Shakers will be prominently featured in the March 15th issue of Library Journal and celebrated at a special reception in June during the American Library Association’s annual conference in Chicago, IL. The print feature’s companion website is sponsored by OCLC and will be available at the library journal website.

Some of this post’s content about the award was adapted from the Library Journal press release.