On March 3rd we had a class at Beckman Institute, the place full of cool things one of which is an advanced 3D scanner. The class was divided in two groups, and I was in the group that first went to experience the huge 3D scanner. The class was led by an experienced professional, Travis, who explained us the history and other aspects of the 3D scanning. One of the cool things he mentioned was that he worked on a project where he had to scan Alma mater, so the graduates would have an opportunity to take a photo with it, while Alma was gone for reconstruction. 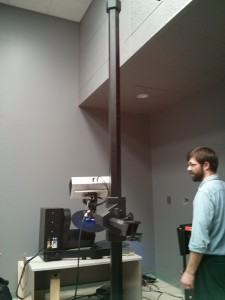 Moving forward, one of our classmates offered to scan her special equipment for wheelchair racing. This was actually a really good idea since the equipment had to be custom made and often time consuming and challenging and therefore the opportunity of replicating it with 3D scanning and printing seemed like a possible solution. Travis started scanning the equipment, but in the beginning the fidelity was not high enough. The reason for that is because the equipment had a rubber part on it and Travis had to spray it first to clean. After that the scanning process continued smoothly. 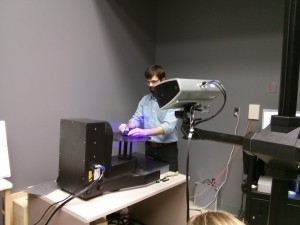 The next week Travis visited us at Maker lab and gave a tutorial on how to use the software called Geomagic. He started by showing us the equipment we scanned the week before. With the help of Geomagic he was able to clean the equipment and get it ready for printing. However, as an example for our tutorial he then used some clay made object, since it was less complex. We learned how to clean the model by trimming, mashing and cutting. Overall, I learned that Geomagic is a software that is basically used for getting the model ready for printing.

This experience showed me the opportunity to scan the objects with high fidelity and preparing it for printing. Being a business major, I right away started thinking about the opportunities for commercializing the things that can be done with 3D printing. Especially, since we scanned the equipment for racing that had a certain demand but no current efficient solutions.