Come snow, come rain, come sleet, hail, and wind, the winter in Illinois can bring about the winter blues and leave you stuck inside. What better time than to cozy up with a good read that can transport you out of the four walls of your dorm or apartment? The UGL is here to help with some recommended reads that incite adventure, wanderlust, and your inner-travel bug. See the list below for several book and audio book options you can check out over winter break to “check in” to an amazing adventure. Click on the titles to be linked to the item in the University of Illinois Library catalog.

Don Quixote – (fiction) This classic takes you with Don Quixote on his exploration of the Spanish countryside. Accompanied with his steadfast companion Sancho Panza, they attempt to find their inner chivalry and bravery after reading of the deeds of medieval knights. In this journey, Quixote becomes a knight, mistakes an inn for a castle, and falls for a “princess” he meets along the way. This classic ends on a cliffhanger, but is a classic for a reason: full of folly, quick wit, and dense characters, this one will not disappoint.

Where’d You Go, Bernadette (fiction) – If warm places aren’t your thing, you’ll love this story where penguins make an appearance. When Bee’s agoraphobic mom goes missing before the family is set to go to Antarctica, Bee’s dream vacation destination, Bee learns that the ship ride isn’t so great, but the people that you meet along the way are. This is a quick read told from Bee’s viewpoint and several of her diary entries that will have you laughing out loud and feeling her every emotion along the way—sans the cold!

The Best American Travel Writing 2004 (fiction) – Perhaps you don’t want to leave the United States over winter break or you simply can’t and are looking for some local inspiration. This compendium contains 32 fictional short stories about characters who traveled across America. If you read this and still find that you’re a sucker for more short stories about travel, “The Best American _______ Writing” series is published each and every year in a variety of different genres!

A Walk in the Woods

A Walk in the Woods (nonfiction) – Don’t you love the sound of winter? Everything is so quiet and peaceful–you can almost hear the snowflakes falling from the sky. This best-selling recount of one man’s travels through the Appalachian Trail will have you thinking about setting up hiking plans for Spring Break 2018. Bill Bryson recounts his journey on the Appalachian Trail starting in Georgia all the way through Maine. You’ll want to get back in touch with the winter silence in your nearest woods once you read his account of every rock, insect, bear (and human) he met along the way.

The Island at the Center of the World

The Island at the Center of the World (fiction audio book) – If nature isn’t for you and you’d rather be whisked away to an urban setting, this book is for you. This work examines the influences of the Dutch in establishing New York City as it is known today. Based on recent archival finds and research, the story follows several influential figures and their lives as they come to find themselves settling in America. 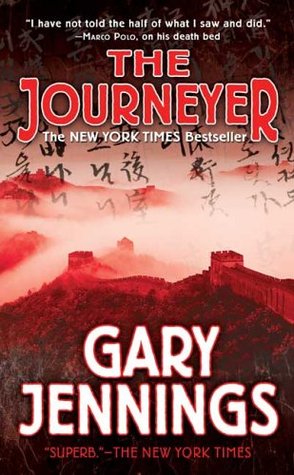 The Journeyer (fiction) – We all know his name from a famous game, but many of us don’t know his story. If you like reading about the fictional adventures of very real people—in this case, Marco Polo—this book is for you. After being falsely accused of murdering his lover’s husband, he is banished from Venice. This work of fiction then recounts his famed journey through the Orient and how Marco Polo defeated all the odds despite his “criminal” record to become one of the richest men in Italy.

The Great Railway Bazaar: By Train through Asia (nonfiction) – If you’re taking the Amtrak this winter, why not read the original travelogue inspired by train travel? In 1973 Paul Theroux traveled across Europe, the Middle East, Eurasia, and Asia by train and back again. While it may not be the Amtrak, Theroux did take famed train lines like the Orient Express and the Trans-Siberian Express on his trans-continental tour.

Audio Book Access available online through the U of I Catalog

Istanbul: Memories and the City

Istanbul: Memories and the City (nonfiction) – This translated work is a memoir that documents the political and cultural climate of Turkey in the early 2000s. As a perspective piece, we recommend it. Settle down with some tissues in addition to the hot cocoa though, as this story can get melancholy and serious.

Shantaram (fiction) – If you’re feeling like you want to break out of your dorm or house due to cabin fever, the journey of two criminals fleeing prison to Bombay may pique your interest. This story begins in Australia but ends in Bombay, India. In this fast-paced story, heartbreak, betrayal, mafia wars, and drug crimes are abundant, but Lin, the protagonist, simply wants to find a place where he can blend in, find love, and settle down.

The Alchemist (fiction) – Winter is the season for dreamers, wishers, and miracle makers. Undeniably the most famous fictional travel piece, The Alchemist follows Andalusian, a young Egyptian sheep herder, as he travels through Egypt in search of a place he was once called to in his dreams. He’s in search of treasure, hope, and ultimately himself. Sometimes the greatest adventure is the one of self-discovery.