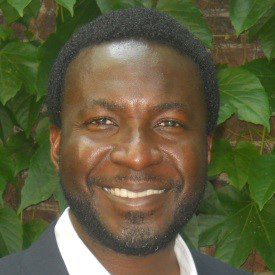 Kimani C. Toussaint, Jr., Ph.D., Director and PI, is an Associate Professor in the Departments of Mechanical Science and Engineering, and Bioengineering, and an Affiliate Faculty in the Departments of Electrical and Computer Engineering, as well as the Beckman Institute for Advanced Science and Technology at the University of Illinois at Urbana-Champaign. He directs the laboratory for Photonics Research of Bio/nano Environments (PROBE Lab), an interdisciplinary research group which focuses on both the development of novel, quantitative nonlinear (multiphoton) optical tissue-imaging techniques as well as harnessing the optical properties of plasmonic nanostructures for light-driven control of matter. His group has developed novel “multifunctional” nanoantennas based on 2D arrays of high aspect ratio pillar-supported plasmonic nanoantennas. His current research interests include application of nanostructured surfaces to concentrated solar power technology, and  integrating polarization  metrology in harmonic imaging. 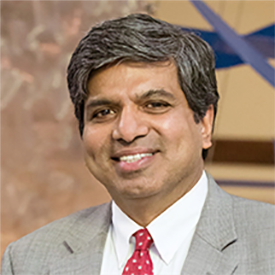 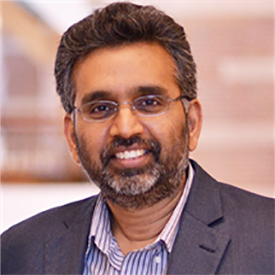 Narayana Aluru, Ph.D., co-PI, is the Richard W. Kritzer Distinguished Professor in the Department of Mechanical Science and Engineering, and faculty affiliate of the Beckman Institute, National Center for Supercomputing Applications (NCSA) and Center for Nanoscale Science and Technology at the University of Illinois at Urbana-Champaign. His work on computational nanotechnology has focused on multiphysics and multiscale analysis of nanofluidic transport through nanopores, developing theories for solid/liquid interfaces, understanding mechanical and electronic properties of nanomaterials, developing theories for energy losses in nanomaterials, and developing uncertainty quantification approaches. His group has developed methods to link quantum, atomistic, meso and classical theories to describe nanotransport and materials behavior. His group has worked on a number of applications including water desalination, nanopore sequencing, nanopower generation, and sensing and actuation. 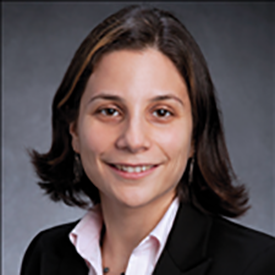 Elif Ertekin, Ph.D., co-PI, is an Associate Professor in the Department of Mechanical Science and Engineering, and faculty affiliate of the National Center for Supercomputing Applications (NCSA), Materials Research Laboratory (MRL), and the Center for Nanoscale Science and Technology (CNST) at the University of Illinois. Her research on computational nanoscience and nanotechnology is focused on multiphysics and multiscale modeling of structure/property relations for electronic and optical nanoscale systems, disordered media, and transport in nanostructures. Application areas include thermal materials and active thermal interfaces, growth and synthesis of carbon based low-dimensional nanostructures, and surface and interface properties for catalytic nanoparticles. She will assist with the development of atomic scale simulation tools to capture nanoscale transport phenomena, ranging from electrical, chemical, mechanical, to optical. 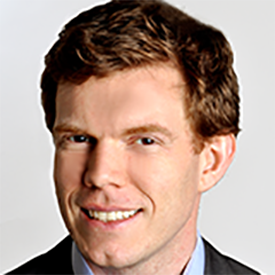 Hayden Taylor, Ph.D., co-PI, is an Assistant Professor of Mechanical Engineering at University of California, Berkeley. His research spans the invention, modeling and simulation of micro- and nano-scale manufacturing processes. He is particularly focused on processes that can be used to fabricate extremely rich and complex, multi-scale geometries, such as are found in semiconductor integrated circuits and biological tissues. In many of these processes, the geometrical design strongly influences the performance of a manufacturing process. His work has addressed plasma etch, polymer bonding, chemical mechanical polishing, and mechanical exfoliation of van der Waals-bonded solids. We have particular expertise in mechanical lithography processes including micro-embossing and nanoimprint lithography (NIL). Current research activities have the following themes: (A) contact mechanics in materials processing, (B) surface engineering for energy transfer, and (C) multi-scale additive manufacturing, particularly applied to biological tissue scaffold engineering. 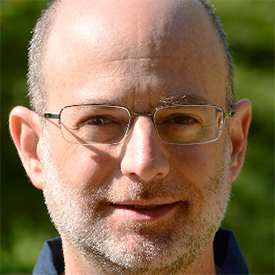 Dan Katz, Ph.D., Cyberinfrastucture Lead, is Assistant Director for Scientific Software and Applications at the National Center for Supercomputing Applications (NCSA), Research Associate Professor in Computer Science (CS), Research Associate Professor in Electrical and Computer Engineering (ECE), Research Associate Professor in the School of Information Sciences (iSchool), and Faculty Affiliate in Computational Science and Engineering (CSE) at the University of Illinois Urbana-Champaign. He is also Guest Faculty at Argonne National Laboratory and Adjunct Faculty at the Center for Computation & Technology (CCT), Louisiana State University (LSU), where he was previously CCT Director for Cyberinfrastructure Development from 2006 to 2009, and Adjunct Associate Professor in the Department of Electrical and Computer Engineering from 2006 to 2013. He was also previously a Senior Fellow in the Computation Institute (CI) at the University of Chicago and Argonne National Laboratory (2009-2016), a Program Director in the Division of Advanced Cyberinfrastructure at the National Science Foundation (2012-2016), Open Grid Forum Area Co-director for Applications (2010-2012), and TeraGrid GIG Director of Science (2008-2011). From 1996 to 2006, he was at JPL in a variety of roles, including: Principal Member of the Information Systems and Computer Science Staff, Supervisor of the Parallel Applications Technologies group, Area Program Manager of High End Computing in the Space Mission Information Technology Office, Applications Project Element Manager for the Remote Exploration and Experimentation (REE) Project, and Team Leader for MOD Tool (a tool for the integrated design of microwave and millimeter-wave instruments). From 1993 to 1996, he was employed by Cray Research (and later by Silicon Graphics) as a Computational Scientist on-site at JPL and Caltech, specializing in parallel implementation of computational electromagnetic algorithms. 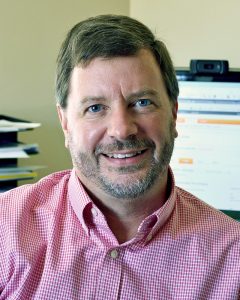 Jay Roloff, Project Site Lead, is the Associate Director for Program Management at the National Center for Supercomputing Applications (NCSA). He holds a Masters of Business Administration Degree and is a Certified Project Management Professional. In his capacity at NCSA, he leads the NCSA Project Management Office and provides project and program management for the Directors Office and many major programs within the center including NCSA’s International Programs. Prior to joining NCSA, he held senior management positions at several high technology manufacturing companies including Epiworks, NEG Micon USA (acquired by Vestas) and Central Data. Mr. Roloff has focused his career on re-engineering organizations and projects and assuring that they are managed as efficiently as possible. 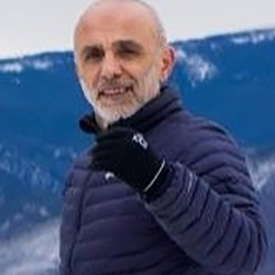 Nahil Sobh, Ph.D., Consulting Project Manager, is the Project Lead of the Data Science Research Implementation team of the NIH BD2K Center and  technical lead of the NSF nanoBIO node project at the University of Illinois at Urbana-Champaign. He received a Ph.D. in Applied Mathematics, and a Ph.D. in Solid Mechanics/Civil Engineering both from the University of Colorado Boulder. His research interests are in High Performance Computational Sciences and Engineering, Data Science, Optimization, Predictive Analytics, Machine Learning, Big Data, Data Visualization. Dr. Sobh is also affiliated with University of Illinois Computational Science and Engineering Program, Beckman Institute for Advanced Science and Technology, Department of Civil and Environmental Engineering, Department of Mechanical Engineering and Sciences, and the Institute for Genomic Biology. 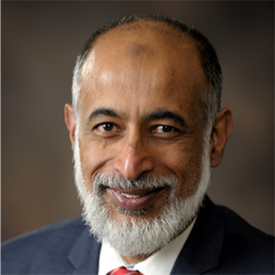 Irfan Ahmad, Ph.D., Education & Outreach Coordinator is the Executive Director for the Center for Nanoscale Science and Technology, and Resident Faculty at the Micro and Nanotechnology Laboratory, and co-PI on NSF I/UCRC- the Center for Advanced Research in Drying. His expertise is in sensors, agricultural machinery design and manufacturing; and promoting university-industry partnerships. He has co-chaired Annual Nanotechnology Workshops and Summer Institutes at Illinois. 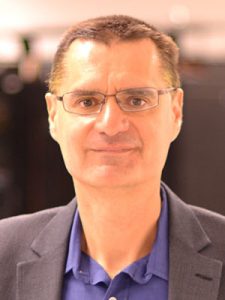 Seid Koric, Ph.D., Technical Director NCSA Industry Program, has more than 20 years of experience at the National Center for Supercomputing Applications (NCSA), conducting cutting-edge applied research and providing consulting for the national academic and industrial computational communities on the center’s high-performance computing (HPC) platforms. He earned M.S. in aerospace engineering (1999) and Ph.D. in mechanical engineering (2006) from the University of Illinois at Urbana-Champaign. Dr. Koric is currently the technical director for the NCSA’s Economic and Societal Impact Directorate that includes NCSA Industry – the largest industrial high performance computing (HPC) outreach in the world. He also serves as Research Professor in the Mechanical Science and Engineering Department at the University of Illinois, Urbana-Champaign. Dr. Koric has developed, implemented, and tested several ground-breaking numerical methods for solving highly-nonlinear multiphysics and multiphase problems. His research interests are in multiphysics modeling of complex engineering processes and extreme scale high performance computing in science and engineering. 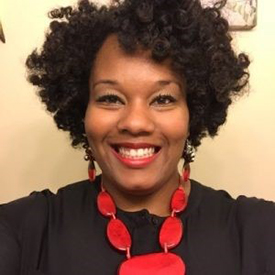 Ayesha Boyce, Ph.D.,External Evaluator, is an assistant professor of Educational Research Methodology at the University of North Carolina at Greensboro. Dr. Boyce’s research focuses on attending to value stances and issues related to diversity, equity, access, climate, cultural responsiveness, and restorative justice within evaluation—especially multi-site, STEM, and contexts with historically marginalized populations. Dr. Boyce has evaluated many programs funded by the National Science Foundation, including Science and Technology Centers, CREST Centers, HBCU-UP, Centers for Chemical Innovation, Network for Computational Nanotechnology Nodes, Research Experiences for Undergraduates, Research Experiences for Teachers, and Integrative Graduate Education and Research Traineeships. She has also evaluated programs funded by the National Institutes of Health, Arizona Department of Education, Title VI, Illinois P-20 Council, and Spencer and Teagle foundations.  From 2014-2016 she was the Chair of the AEA STEM Education and Training TIG.