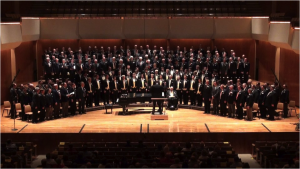 ​The Varsity Men’s Glee Club has a long, rich history of achievement in performance and representation of the University of Illinois.

The club was formed in 1886, with the original name of The Apollo Club. While the history of campus activities at that time is not well documented, it appears that the Apollo Club was an outgrowth of the Pohiloathean Literary Society. In the late 1800’s, literary societies were the main social organizations on campus, and often sponsored poetry readings and concerts.

A few years later, the group’s name was changed to The Varsity Men’s Glee and Mandolin Club. In 1893, the group took its first off-campus tour, a joint venture with the Guitar Club to perform in Danville. Since then, the club has performed in countless cities and towns throughout the state.

By the early 1930’s, the organization had adopted its current name and was regularly touring Illinois. In 1933, the group toured the eastern United States, from Florida to Maine, and parts of Canada, finishing with a performance at the Chicago World’s Fair. In the 1950’s and 60’s, the club established itself as one of the nation’s top choruses. In 1955, the club again toured the eastern United States and appeared on Ed Sullivan’s Toast of the Town.

In 1958, the organization was invited by the U.S. State Department to appear at the U.S. pavilion at the World’s Fair in Brussels, Belgium. The VMGC. was the only male chorus to receive such an invitation. The club spent much of the year raising over $50,000 needed for travel expenses, and met its goal with the help of the Lions Clubs, the U. of I. Foundation, and dozens of other campus organizations, local businesses, and professional groups. During the two weeks the club spent in Europe, they participated in the Belgium International Choral Festival, and concertized in Munich, Heidelberg, and Paris.

In 1959, the club performed at a celebration honoring Lincoln’s 150th birthday, and began the practice of performing in joint concert with glee clubs from other schools for Dad’s Day. In the 1960’s, clubs from Michigan, Northwestern, Wisconsin, Purdue, and Notre Dame performed with the Illinois group, enhancing the relations (and the rivalries) between these schools. Currently, the Women’s Glee Club performs with the Men’s Glee Club for their Dad’s Day Concerts.

A spring concert in 1960 marked first Varsity Men’s Glee Club alumni reunion, which featured approximately 100 alumni. The event was repeated in 1961 and 1962. The club continues to honor its alumni by inviting them to join in whenever the group performs its popular “Big Ten Medley” at each concert.

In 1963, the group traveled to Louisiana, where they concertized at Louisiana State and Tulane Universities.

During the 1960’s, several smaller groups of glee club members appeared with the club. These included the “Other 3”, and the “Boys Next Door”. In 1969, the “Other Guys” was formed. This popular octet continues to appear frequently on campus and in concert with the club.

The club continues to be active both on and off campus. In 1984, the group was featured at the Colorado Music Educators Association, and in 1986 the group performed in joint concerts with the University of Michigan Men’s Glee Club at both Michigan and Illinois.

In 1986, the club celebrated its 100th Anniversary with a Alumni Reunion concert. Nearly 200 alumni came from 23 states to perform with the group.

In 1996, the club’s long time director William Olson passed away. The club honored his memory by singing at a memorial ceremony on September 29, 1996.

Spring Break of 1998 featured the Glee Club’s first tour under Dr. Coleman’s direction. Our tour brought us to Morris, IL; Forest Park, IL; Naperville, IL; Ann Arbor, MI; and Muncie, IN. We held a joint concert with the University of Michigan Men’s Glee Club Directed by Dr. Jerry Blackstone, and we also spent some quality time with the Notre Dame Men’s Glee Club. A good time was had by all, and everyone who experienced it looks forward to the next time the VMGC is able to go abroad.