As someone who has been swimming nearly their whole life, there is absolutely nothing I love more than being in the water. For me, the water is my comfort zone. I know I am a strong swimmer. When I heard we were going snorkeling, I could not have been more excited. I love aquatic animals and fish, and more importantly, I love to swim.

To my dismay, Dr. Rodriguez informed us all that the snorkeling was cancelled because of the high surfs. While I was disappointed, I knew that things happen, and I was excited to hear we might go to the beach instead. The next day plans had changed and we were informed that we were going ziplining. Although I hate admitting it, heights aren’t exactly my favorite, so when Dr. Rodriguez told us that we would be ziplining, I began to grow anxious.

A million thoughts rushed through my brain. I was so scared, that I even considered using my stomach flu illness as an excuse as to why I couldn’t zipline through the rainforest. However, I quickly realized that this was a once in a lifetime opportunity, and that I could not let my fears take over and miss seeing the rain forest from a bird’s eye view.

When we first geared up, I surprisingly was very calm, but I suppose some of the people around me could sense my fear so many people started joking around with me trying to scare me. The man putting on my harness even asked me, “Is this your first time?” when I said yes, he followed jokingly with “Me too, I am learning with you guys.” What really got my stomach in a knot was when he said “Hopefully heights aren’t a problem for you, because each line gets higher from the ground.”

After that, the lady proceeded to give us all these instructions on how to break, and what to do if we didn’t make it to the end of the line. This increased my fears even more. At that moment, nothing seemed more terrifying than not making the end of the line and dangling in the air. I followed directions carefully, and went on the first line. To my surprise, I was not scared at all. I loved being in the air. As the lines progressed, they did get higher, but I enjoyed them, except one.

When we first arrived to the site, there was a huge red structure with a nearly vertical ladder and a platform. I remember talking to Emily and Emma saying “There is no way I am climbing up that.” Being experienced zipliners, they assured me that I would not have to climb up to that platform and that you simply just zipline to platform to platform and the ladder was just there for precautionary measures. After the fourth line, the man running the even looked at me and said, “alright go to the ladder and climb all the way up.” Because I enjoyed ziplining so much, I forced myself to conquer my fear. When I got on the ladder, my legs instantly felt like jello. Even members of our group who weren’t usually afraid of heights were scared on the latter. To make matters worse, when I was half way up the ladder, it began to pour rain. The steps became slippery, and I looked down by accident. I took a moment and a deep breathe, and with the encouragement of peers, I made it up the ladder. I was so proud of myself. From then on, the views were absolutely breathe-taking, and I felt like I was soaring above the clouds. Zipliing for me was one of the best experiences of my life, and gave me a sense of adrenaline that I craved for me. 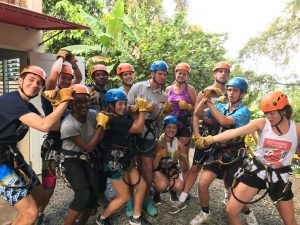 The Crew before taking on the ziplines!

If I didn’t face my fear, I would never have had this amazing experience. This was a large lessons I learned throughout my time in Puerto Rico. In order to experience the world, you have to go out and try new things. Rarely are things ever learned in your comfort zone. Never in a million years would I have thought I would get up on a platform and jump on it into the depths of the rainforest, but if I hadn’t I would have never known what it was like to fly. Often times, traveling abroad scares a lot of people. People always fear the unknown, and dwell on possible things that could happen to them. Traveling to Puerto Rico has given me a further desire to travel the world and do things that scare me. I can confidently say that I am definitely over my fear of heights, and I hope to zipline again wherever I end up in this world. I learned that life begins at the end of your comfort zone.