Upon arriving to the beautiful land of Puerto Rico, I did not feel any real impact or wow factor. Having been to Puerto Rico a few times before, I had already seen the beautiful beaches, mountains and rainforest that the land has to offer. The culture in Puerto Rico was not surprising or different to me since I come from a Hispanic background. While hanging around the bars by our apartment in Boquerón, Cabo Rojo, I realized that the music that was being played was very familiar to me. Songs that I grew up listening to such as Suavemente by Elvis Crespo was played. I sang and danced along with the locals while my peers looked at me with fascination. While passing the bars, I would hear familiar music and start to dance where I stood. I liked hanging around this one specific bar because it was the only one playing bachata. Bachata is a form of Hispanic dance that is usually found within the states and is my favorite style to dance to. Surprisingly enough, one of my male peers wanted to learn the dance. Step by step, I showed him how to do it. Within in minutes he was able to follow along with me doing the simple steps of “side, side, hit”.

Another element that I found of similar of back home was the style of houses, but the houses I’m talking about are the ones found in Mexico. With the gates outside and colorful houses, it looked like I was in any neighborhood in Mexico. The atmosphere felt familiar and the people spoke the same language that I was used to. Spanish is such a common language especially in Latin American countries or some Caribbean islands. The cultures in each area are vaguely similar so I did not have a hard time adjusting to the life here in Puerto Rico. When the locals found that I could speak Spanish, their whole demeanor changed. It went from nonchalant to engaged and friendly.

Although a lot of aspects felt familiar to me during my stay in Puerto Rico, there was some things that were new. For example, during our stay in Cabo Rojo, the holiday of Los Reyes Magos (Three Kings Day) occurred. At night the streets of the downtown area was congested with people for all walks of life and all ages. Music filled the streets and atmosphere was joyful. Streets were blocked and people partied in the streets. Having the opportunity to experience that, for personally, I’ve never celebrated that holiday, was very special to me.

On another note of positivity, a certain event became a repetitive experience that surprised me. I quickly realized that I was the only one of my peers that could speak Spanish somewhat fluently. Because this, my classmates would ask me to translate things all the time but I didn’t mind. I was happy to help. There were numerous occasions where I would order food for people or ask questions in Spanish. One of my friends here on the trip, has asked me numerous times to stand by her side while I help her order food. By doing this simple act that I have no trouble doing, I feel appreciated and useful. It has made me look at my life differently because even though I had an advantage over my peers, I used my knowledge to help people. I want to continue learning the language in order to further help other individuals and feel more at home within the people of my culture. 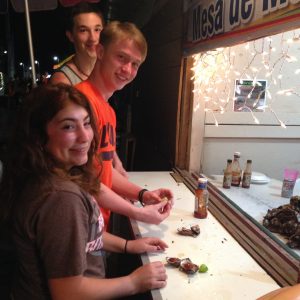 While exploring the downtown area by our apartment in Cabo Rojo, some of my friends and I stopped to eat a few ostras (oysters). 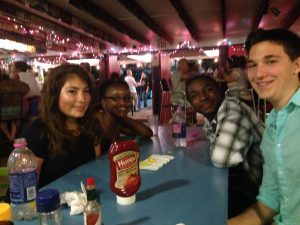