By Mia Adams on February 5, 2020 in Uncategorized 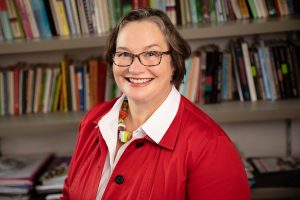 Buckley, Professor of Sociology, began with a slide that stated “We know, we care, and we love Mary Louise Kelly.” Before beginning, she wanted to make the point that, despite negative public opinions, people do in fact know where Ukraine is, and they know and care about what is happening there. Buckley reiterated that the conflict in Ukraine is worthy of discussion now more than ever, and suggested that an analysis of the conflict in Ukraine can apply to a larger discussion of how global displacement is growing.

Buckley briefly discussed her participation within the Central Eurasian State Capacity Initiative (CESCI). Professor Buckley has also been a part of the Minerva Research Initiative since 2019 with Erik Herron, WVU, and Ralph Clem, FIU. Together this group has worked toward establishing state capacity, and its coercive, extractive, and bureaucratic nature, as a conceptual framework. Buckley explained individual and regional experiences of bureaucratic capacity differ within states, and suggested this uneven state capacity provides a unique lens with which to analyze marginalization. 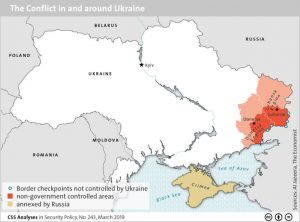 The heart of Buckley’s presentation came from her analysis of Internally Displaced Persons (IDPS). There are currently 1.5 million IDPS living in Ukraine alone. This displacement instigates a number of challenges, and IDPS are being referred to around the world as “The New Global Threat”. In Ukraine specifically, IDPS challenge internal sovereignty, and issues relating to property rights, voting rights, and service access are becoming more prevalent.

Professor Buckley has two undergraduate students from UIUC working with her on this project, Grace Ruxlow and Jarod Fox. Jarod, a senior in Global Studies and a Geography major, further contextualized the conflict in Ukraine by presenting a number of maps made by bringing data points together to show attacks on healthcare institutions and schools. With his finished product, Fox was able to illustrate that there has been a serious compromise of healthcare in the eastern regions of Ukraine, and education in the west.

Over 15,000 people have been displaced from the eastern regions near the conflict line, and Fox identified three groups of people who are moving out of the eastern regions: working age people, people with children, and pensioners. Working age people are migrating to other parts of the country rather evenly, as they move to the areas that have job opportunities. People with children want to move their families as far away from the conflict as possible, but this means that children are moving to the western regions where the education system is inferior. Pensioners, in opposition, want to remain close to their homes, so they migrate as little as possible, and those that do are displaced to other eastern regions. But the problem with this lies in the fact that the eastern regions have inadequate healthcare services because their hospitals and clinics are being shelled.

Buckley concluded by suggesting that an analysis of how and why people are internally migrating in Ukraine can apply to other areas with significant migration like Syria and parts of Africa, and urged the audience to keep in mind that the number of IDPS around the world is growing, even more quickly than the number of global refugees.

For more information and resources relating to this talk and the conflict happening in Ukraine, visit the accompanying libguide found here.