On Thursday October 17th, the Center for Global Studies hosted Dr. David D. Laitin, a co-founder of the Immigration Policy Lab, and James T. Watkins and Elise V. Watkins Professor of Political Science at Stanford University. CGS invited Dr. Laitin to the University of Illinois Urbana-Champaign to give a presentation on his latest research project as part of the MillerComm Series in conjunction with the Center for Global Studies’ year-long series on Global Migrations. Dr. Laitin’s presentation was titled “Framing the Global Immigrant Challenge: Evidence from Elected Representatives’ Tweets.” 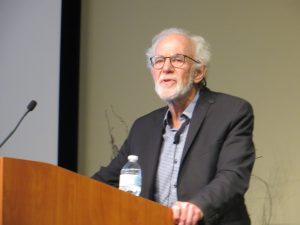 Dr. Laitin began by outlining several ideas. First, he suggested that the global migration crisis sees a steady flow of migrants coming from the Global South to the Global North, a phenomenon that continuously changes the culture and industry found in the North. Second, he highlighted the need to talk about migration and immigration, and the serious humanitarian challenge that the growing number of refugees and displaced peoples presents. He then posed several questions he believes to be pertinent to his overall project and the global migration crisis. They were:

Dr. Laitin’s project involved a long process of data collection. First, he and his team identified elected officials from the countries of France, Germany, Canada, and the U.S. who were in office between 2013 and 2019. They then collected all the tweets from each elected official in each country from that time frame. They collected over 8 million tweets using Twitter’s streaming API. During the categorization process, the system was able to organize the tweets into four sections: those relating to immigration and its connections to economy, security, law, and culture. The results of these groupings suggested that these countries, the United States and Germany included[TDC1] , care most about what effect immigration has on security and law. Of the four categories, the influences of immigration on economics and culture were thought to be less significant; however, they are still significant enough to 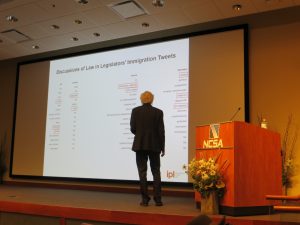 At the end of his presentation, Dr. Laitin made several overarching conclusions. First and foremost, he made the argument that elected officials are utilizing Twitter to react to daily events, rather than using Twitter as a tool to discuss long-term immigration trends. Second, he made the conclusion that neither left nor right traditional parties favor positive or negative tweets. On average, elected officials tweeted both positive and negative sentiments towards immigration, regardless of their party affiliation. However, the salience of far right parties was greater in response to immigration overall. Elected officials associated with far right politics tweeted more about issues relating to immigration than officials associated with more left parties.

The API used by Dr. Laitin and his team is stil  l running in real-time, continuously collecting tweets from elected officials. Dr. Laitin and his team are planning to include more countries and languages in the future, and hopefully create a website or database so the tweets and their trends are more readily available to researchers and the public.

To learn more about Dr. Laitin, you can visit his faculty page from Stanford University.