By Mia Adams on September 21, 2019 in Uncategorized 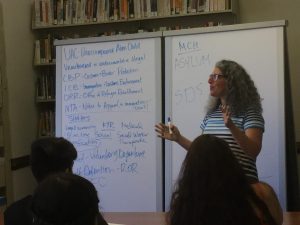 On Wednesday, September 18th, Lauren Aronson gave a presentation titled “Unaccompanied Immigrant Kids in the United States: the Journey and the Destination.”

Aronson is an Associate Clinical Professor with the College of Law at the University of Illinois Urbana-Champaign. Previously, she has worked at Louisiana State University directing the Immigration Law Clinic, at Michigan State University as a Clinical Teaching Fellow, and with the National Immigrant Justice Center in Chicago where she worked directly with detained unaccompanied immigrant children.

Wednesday’s discussion was based on Aronson’s experience working with unaccompanied immigrant children in the United States. She began by explaining a number of acronyms that are often involved in discussions on immigration. They are:

Aronson then continued her presentation by walking us through the process these children face, and sharing with us her personal experiences and anecdotes from working with the National Immigrant Justice Center. According to Aronson, at the end of August of this year, there weremore than 72,000 unaccompanied children living in the United States, a huge influx from 2010 when the number was around 18,000. Of these children, a large majority migrate from four Central American countries: El Salvador, Honduras, Guatemala, and Mexico. Aronson explained that these children are labeled as “unaccompanied” when they are under age 18, lack legal status, and do not have a legal parent or guardian living in the United States. However, because it is very difficult to locate family members and find out if a legal guardian is living in the U.S., often a large number of these children are detained despite actually having family in the country.

Unaccompanied children come to the U.S. a number of ways, and for a variety of reasons. Many children come by bus, train, or walking or hitchhiking, some families pay smugglers to take their children over the border, or sometimes, you can find children smuggling other children. These children come from countries with high poverty rates and high homicide rates. Currently, the homicide rate in the U.S. is between 4.5% and 5%. The homicide rate in Honduras alone is nine times that. Sometimes because of this overabundance of violence, unaccompanied children are enabled to stay by seeking asylum. But more often, these children are held in detention until they leave voluntarily or are removed from the country. 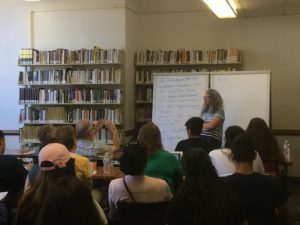 The process begins when a child enters the United States and is taken into custody by CBP (Customs & Border Protection). Within  72 hours, these children are expected to be transferred under ICE (Immigration & Customs Enforcement) authority, and moved to an ORR (Office of Refugee Resettlement). These resettlement centers are considered to be “shelters” for children waiting to be reunited with their families. But more realistically, these detention camps treat the children more like captives; the children are unable to come and go as they please, they are forced to wear uniforms, and they have to adhere to a schedule. In the detention centers, every child is given a medical examination and legal screening which involves things like being vaccinated, having dental work done, and meeting with a lawyer or legal aid so they can be told their rights. While in detention, the children have one hour of recreation time every day and usually start learning English. Social workers and mental health services are often available to children, but the detention centers have been given the name “las hieleras”, or “the iceboxes”, because the centers are so cold, and often these children are left exposed without proper necessities. When some children can no longer stand living in detention, they volunteer to be removed. If they choose to stay, they must wait until they receive an NTA (Notice to Appear in Immigration court), and go to trial. The average stay of a child living in an ORR is  57 days.

If a child does not choose to “voluntarily depart”, if they do not age out (become 19  years of age while living in detention), and are given an NTA, they have the opportunity to go to immigration court and plead their case. When a child arrives at his/her Master Calendar Hearing (MCH), they are presented with their “alien number” and the allegations against them. These allegations are usually given in the following structure:

When a defendant pleads guilty, their only hope of staying is to then argue for “immigration relief”. This relief consists of an individual either seeking asylum on the basis of some kind of cultural, political, social, or gender violence, or by filling for Special Immigrant Juvenile Status (SIJS), which involves proving he/she has been abused or neglected by a parent in his/her home country.

Aronson explained to us that this lengthy process involves endless obstacles for unaccompanied children, and her hour-long description is only scratching the surface of what is going on in this country. A large number of children never make it to the point where they can go to immigration court and plead their case, and even if they do, there is no guarantee their appeal to seek asylum or SIJS will be approved. Aronson took several questions and expanded on more finite details of the conditions the children live in and how they arrive, and ended with the statement that, while the overabundance of unaccompanied children and the treatment of them is daunting and dreary, there are many things we as citizens can do to help.

To learn more about Lauren Aronson, visit her faculty page on the College of Law website. https://law.illinois.edu/faculty-research/faculty-profiles/aronson-lauren-r/

To learn more about this topic, visit the University Library’s libguide. https://guides.library.illinois.edu/c.php?g=966084&p=6979851

To follow current events pertaining to immigration in the U.S., follow the proceedings and publications of organizations such as the National Immigrant Justice Center. https://www.immigrantjustice.org/issues/unaccompanied-immigrant-children