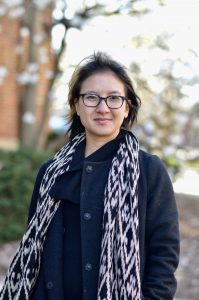 Anita Say Chan is an Associate Professor in the School of Information Sciences and Department of Media and Cinema Studies at the University of Illinois, Urbana-Champaign. Her research, teaching, and community service interests include globalization and digital cultures, innovation networks and the “periphery”, science and technology studies in global contexts, and hybrid pedagogies in building digital literacies. She received her PhD in 2008 from the MIT Doctoral Program in History; Anthropology; and Science, Technology, and Society. Her first book the competing imaginaries of global connection and information technologies in network-age Peru, Networking Peripheries: Technological Futures and the Myth of Digital Universalism was released by MIT Press in 2014. Her research has been awarded support from the Center for the Study of Law & Culture at Columbia University’s School of Law and the National Science Foundation, and she has held postdoctoral fellowships at The CUNY Graduate Center’s Committee on Globalization & Social Change, and at Stanford University’s Introduction to Humanities Program. She is a Fiddler Innovation Faculty Fellow with the National Center for Supercomputing Applications. Email: achan@illinois.edu