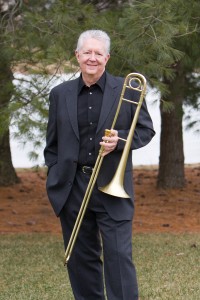 Jim Pugh’s professional career has spanned 42 years (so far), covering every genre and area of the music business.  During his 30-year tenure in New York City as a first call studio musician, Jim played on over 4000 recording sessions and is the only recipient of the NARAS Virtuoso Award for Trombone.  He has toured and recorded with some of the greats of jazz and pop music.  He has composed music for commercial and classical use and has performed, often as soloist, with many major US orchestras (Boston, Dallas, Rochester, New York Phil, St. Luke’s, Orpheus, American Symphony, etc.).  Versatility has been the cornerstone of his career and he’s looking forward to sharing what he’s picked up along the way at “The Complete Trombonist Workshop”. Jim’s current role is Professor of Jazz Studies (trombone and composition/arranging) at the University of Illinois School of Music. Dr. Tom Gibson moved to Atlanta in 2000, after having served for 6 years in the United States Navy Band in Washington, DC. With that ensemble, he was a featured soloist on two national tours and performed regularly at the White House, Pentagon, and around the world.

He now enjoys a varied musical existence, performing occasionally with Atlanta Symphony, Ballet, and Opera Orchestras, as well as regularly with The Neons, Joe Gransden Big Band, The Atlanta Pops, Symphony Orchestra Augusta, Broadway touring shows at The Fabulous Fox, Like a Locomotive, Bumpin’ the Mango, Mercury Orkestar, ROC Ensemble, Bent Frequency, and Coy Bowles Fellowship. He performs in almost every genre imaginable, including orchestral, jazz, rock, fusion, pop, salsa. Lately, he has been seen and heard with the Zac Brown Band, and can be seen on the platinum-selling DVD “Pass the Jar”.

He is active on a number of non-profit boards, including Jazz Orchestra Atlanta, Il Brasso Magnifico, and was recently named President of The Atlanta Pops, for whom he is also Assistant Music Director, and Principal trombonist. He has been invited to participate in the 2016 “Arts Leaders of Metropolitan Atlanta” (ALMA) training program, via which he hopes to continue to find new, CreAtiVe, and profitable ways to keep the Arts alive in his beloved community.

Dr. Gibson also loves to teach, and he is an Artist in Residence at Kennesaw State University and University of West Georgia. He lives in Powder Springs, GA, with his wife, Katlyn, his two adorable children, Bryce and Ella, and an ill-tempered, heart-stealing mutt named Macie. ” Reginald Chapman is an instrumentalist, composer, arranger, and educator born in Williamsburg, Virginia. He earned his Bachelor’s degree in Classical Music Performance at Virginia Commonwealth University under the direction of Ross Walter and Rex Richardson. While completing his Master’s degree in Jazz BassTrombone Performance under the advisement of Jim Pugh at the University of Illinois at Urbana-Champaign, Reginald was a member of UIUC’s award-winning Jazz Trombone Ensemble. Reggie is currently on sabbatical leave from a Doctoral degree in Jazz Performance with a cognate in Classical Composition from UIUC. Presently residing in Richmond Virginia, Reggie performs with No BS Brass and teaches Small Jazz Ensembles, bringing to VCU his prior experience as a teaching assistant at UIUC.