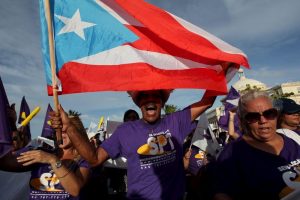 A member of a labor union shouts slogans while holding a Puerto Rico flag during a protest in San Juan September 11, 2015. Reuters/Alvin Baez 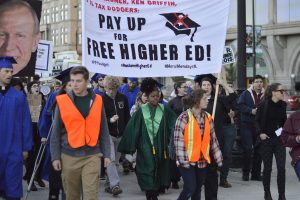 Puerto Rico has a long a rich history. What Puerto Rico is today all began with the settlement of the Ortoriod people between 3,000 and 2,000 BCE. At this time, other tribes also populated the island. At the time of Christopher Columbus’ arrival, the dominant culture were the Tainos people. However, their numbers became dangerously low because of disease the Europeans brought over.

From the early days of exploration, Puerto Rico was a large part of the Spanish Empire. It served as a military post during many wars between Spain and other European Countries. Throughout the 19th century, Puerto Rico and Cuba were the last two Spanish colonies in the new world.

In 1898 during the Spanish-American War, Puerto Rico was invaded and became a possession of the United States.  Later, the Foraker act of 1900, which established a civil government, and the Jones Act of 1917, which made Puerto Ricans United States citizens was enacted.

Similarly, the United States was formed through colonization. Illinois specifically became a state in 1818, and is now considered one of the most powerful states in the United. However, both Illinois and Puerto Rico face their fair share of problems. Specifically, Puerto Rico and Illinois both suffer major economic problems. The island of Puerto Rico is over 72 million dollars in debt, and they have missed key bond payments. The effects of this financial crisis can be seen all over the Island, especially in healthcare and education. To make matters worse, the United States congress is not helping at all. This has made the cost of living in Puerto Rico skyrocket. While in Puerto Rico, we learned that many of their agricultural products are imported.  While Puerto Rico was once used and an agricultural wonderland, it is not agriculturally sufficient, creating food security problems. Many of the problems Puerto Rico faces have roots within the detrimental effects of European colonialism.

Both Puerto Rico and Illinois are often headline horror stories in news outlets primarily because of their financial standings. History has a great deal to do with that. It appears that Illinois and Puerto Rico have regressed as far as the state of the nation is concerned. Puerto Rico had a prime period when they were agriculturally sufficient and they had major exports. We learned a lot about this from a sociologist from the University of Puerto Rico. She talked about the major agricultural/food crisis the island was facing.

As of now, the best thing that can be done is advocating for the issue. For Puerto Rico, a lot of their problems would be solved if they received more support from the federal government, or they became a state. In Illinois people all over the state advocate for issues they care about to their state legislatures. Ultimately, a great solution would be better allocated funds for education. It is difficult to get out of a financial crisis, and Illinois and Puerto Rico have a long way to go. As of now, their quality of life is good compared to developing countries, however, the cost of living in Illinois and Puerto Rico continues to be a reoccurring problem. These problems can be solved with a systems thinking approach, and hopefully one day the political and financial scandals in both Illinois and Puerto Rico will be solved.

One thought on “History Repeats Itself”