Will the campus reopen in Fall?

Whether the schools will reopen in Fall is now a matter of prediction markets bets, but the planning at UofI is already underway.

The focus of the planning is, understandably, on the students, staff and faculty safety. Yet there is an aspect of the process going beyond the campus.

Indeed, UIUC is a primary campus of a large state school with a significant fraction of the students from Illinois, and, more to the point, students returning home on a regular basis. This makes them a potentially strong vector in Illinois epidemic, counteracting the key contributor to flattening the curve, – the localization of the outbreaks. If the contagion flares up and dies out locally, the load on the health system remains sustainably low; if it springs out simultaneously throughout the state, becoming compressed on the time axis, the situation could become dire.

How dire? The only way to get a feel on those effects is explore various scenarios using some model, and to see what happens.

Let’s consider the following – extremely simplified – model of a state (Ideallinois) with a state school in the middle, in a town named Campusurb.

I will model the state as a collection of communities, where the general population and students enrolled into the state school, live.

I will assume some values of parameters that correspond to a slow burning epidemics, with effective branching number \(R_0\) slightly above one (i.e. the epidemics does not die out, but runs its course, at a relatively slow pace). Some details of the model are given below.

One of the most important assumptions is that the hundred of our Ideallinois’ communities are relatively isolated: what happens in one, percolates into the other communities slowly (not much traveling between different places happening). I also assume that at the beginning of the simulation there are just a few communities (in the result shown below, it is just 1) where there is some infected population.

In our model, the Campusurb, when the students are on campus, is a community in itself (roughly speaking, that the students mingle only among themselves, not with the community of people housing, feeding and teaching them).  We will ignore out-of state or international students.

So, what does the model show?

I played with three basic scenarios:

Here are the results (it should be noted that the simulations are stochastic, so each run is a bit different: the salient points outlined above are stable though; I will present the confidence intervals and other simulational paraphernalia elsewhere).

New infections, as a function of the time (in days) in Ideallinois

The first plot shows the infections runs in the general population. One can see that the (5+2) scenarios is the most
dangerous one: the infections are coming in a powerful wave, maxing at 17,000 new cases per day in a million strong state. Assuming 3-5% hospitalization rates this is a dramatic load.

Scenarios (7+0) and (0+7) have comparable effect of significantly “flattening the curve”, with peaks at 33-40% of those in (5+2) scenario on general population.

Infections in the student populations, as a function of time.

What is going on here?

An explanation of these plots can be glimpsed from the heat maps below. Here, the infection levels are shown for all 100 communities (columns of the matrix), as they evolve in time (the vertical coordinate, running from top to bottom). One can see that in the (0+7) and (7+0) scenarios, the infections flare at random times in the communities, spread over the simulation interval. The flattening of the curve is achieved by spreading those localized events. 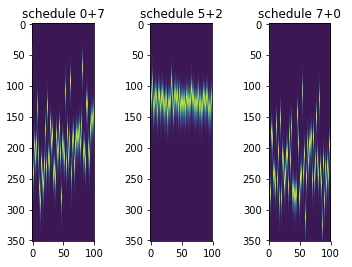 In a contrast, in (5+2) scenario, the students visiting their communities over the weekend serve as a powerful mixer, picking an outbreak in one community and propagating it almost simultaneously through the state.

Obviously these simulations are at best a caricature of the processes at play. The state of Ideallinois is nowhere close to the complexities of Illinois or other state with a large centralized state university campus. Yet, as any model, this one points at a potentially very dangerous development that opening the campus for in-person education can trigger.

(It should be pointed out that even the best case scenario, what we are describing here is the Patchwork Pandemic we seem to converge to, as a nation. Wish the baseline scenario were something better than this.)

What policies can be deployed to mitigate this, and whether this caricature is actually realistic requires an effort beyond what we ca address in this post. In particular, such an effort could be used to test potential feedback driven mitigation policies, that are hard, or politically infeasible to test in real life.

Simulational modeling can help. We need more of it.

I used a stochastic version of SIR, relying on a mean field approximation. Namely, I assumed that the agents in each particular group (students, or a community population) are exposed to random chances of infection, which depend on the fraction of infected people in the community (through local spread) and the fraction of the
infected people in the whole state (though global mixing). The number of infected in each generation is them modeled as a binomially distributed random value. In other words, we are not solving a system of differential equations, but are running a stochastic simulations.

The details of the model will be presented elsewhere (a link to the jupyter notebook to be posted).

misusing this crisis
here and now