By yuliy on February 25, 2019 in amusements, flotsam, visuals

What is your math department strength? One of those rather polarizing questions, or an opportunity to gossip without guilt.

Still, important to understand where your department is on the map, if one wants to steer it in some particular direction, or to keep it where it is.

I wrote a short python script, using BeautifulSoup (thank you!) and campus-wide subscription to MathSciNet (thank you too!) – and downloaded the raw numbers: how many items (whichever MathSciNet is indexing: articles, books, theses,…) are authored by folks from ‘1-IL’ (our code) vs. the total output, split by the rough areas as defined by the Mathematical Subject Classification scheme.

Here are the results. The left display shows the fraction of the world’s math output that folks at University of Illinois produced since (rather arbitrarily chosen cutoff) 2013… The right display shows the total number of published works in each area across all institutions.

The usual caveats comparing publication numbers in different areas apply: some publish at a much higher rate than others; the disparities somewhat reflected in the right table. Still, the tables below invite some deeper level of introspection.

Say, the number of works in K-theory – worldwide – is small. It is small not just because it is harder to write a competent paper there than, say, in game theory, but also because the sum total of people working in the area is low. So a department hosting a high fraction of the world output is akin to being home to an endangered species. Shall we protect our K-theorists from extinction? Or let them being taken over by operator algebra and algebraic topology? To exacerbate these existential worries, are our stats correct in the first place? – when typical number of papers in a subject area is globally in below a hundred a year, fluctuations start to be very pronounced.

ON the other end, at the highest output areas in math proper (PDEs, Combinatorics, Probability, Number theory…) it is important to remember that within each of them there are broad subareas with very different rates of typical output. A lot of publishable papers in, say, combinatorics could have been written pretty fast, but many are deep and use highly technical tools, and would clearly require years of gestation. Perhaps the top level rubrics of MSC provide too coarse a partition to use these numbers algorithmically.

Still, these numbers do tell us something. Judge yourself. 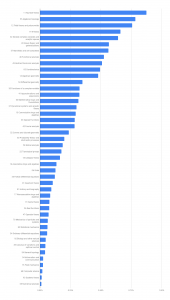 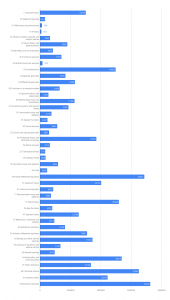 ECE 515, mock final
Fact of the day: Functions with given merge tree