Matlab code for the LARS algorithm [1], which computes the whole optimal path, by a homotopy approach, for the LAR and Lasso problem in constrained form.

I/O:
Input: a design matrix X, a response vector Y, option = lar or lasso, and an (optional) constraint parameter.
Output: the estimated coefficient vector and its support index, the estimated mean vector, and the current correlation and its maximal magnitude in the final step, and the history of step lengths during the LARS iterations. For details, see the function documentation.

Example:
LAR and Lasso whole paths for the diabetes data set used in [1]. 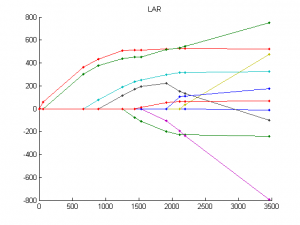 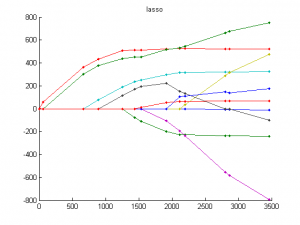