In 2015, around 6 million deer were harvested during the US’s legal hunting season, which is the same number as the total estimated deer population in the US and Canada combined in 1948 (Barlett 1949; QDMA, 2017). With the increasing white-tailed deer population in the Midwest region, carrying capacity—the resource availability to sustain a species population without causing environmental degradation of the land—is critical to the deer health. As it turns out, female pregnancy rates and reproductive characteristics are associated with the number of resources in the habitat available to the white-tailed deer population (Roseberry and Woolf, 1998).

The study, Reproductive Characteristics of Female White-tailed Deer (Odocoileus virginianus) in the Midwestern USA (Green et al. 2017), helps us understand the tight and complicated relationships between female white-tailed deer and their fetuses. The evide

(Fig. 2), and litter size. It was interesting to learn that the sex ratio (number of females to males) per litter was 50:50. Although the sex ratio is even, fetal body length and weight are associated with fetal sex. Male fetuses have a higher BMI than female fetuses. However, at some point, despite the differences in crown-rump length and weight, the speed of growth for both females and males is similar (Fig. 1). Keep reading; this study provided an equation to calculate the fetus’ age in days (FAD) where it includes two constants, 36.82 and 0.32, and one variable. To use this equation, measure the crown to rump length (Fig. 2) of the fetus and plug the number into the respective slot; the result has a buffer period of -2.4 days to +4.9 days.

By knowing the FAD, we can trace back the fetus’s life to when the female became pregnant. The information is useful for the wildlife population management team and the public because it reveals the rutting season, when female deer become pregnant, and when the males are actively searching for females to mate. Something to keep in mind is that the rutting season is associated with high deer movements across landscapes, properties, and roads, leading to higher deer-vehicle collisions during this season.

“During the mating season, watch out for deer. They are moving more and crossing roads without considering the vehicles —they are just following the signal that it is breeding time,” Dr. Mateus-Pinilla explained

The findings from Green et al. (2017) agree with the general practice of hunting during the rut (mating season for deer); this study also estimated that the mean conception day is around November 6. Furthermore, we learned that maternal age only impacts the litter’s size but not the fetus’s size. Supported by the data from Green et al. (2017), on average, 66% of the females were pregnant, from which 86% were adults, and 20% were fawns. 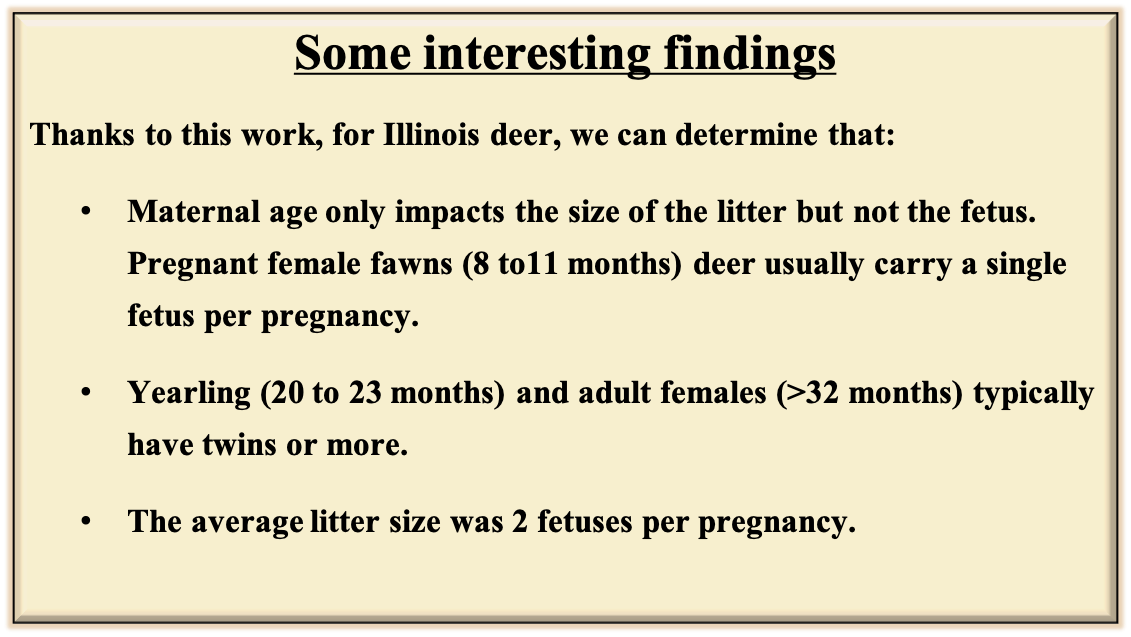 The Illinois white-tailed deer’s herd reproductive parameters indicate that Illinois has a healthy deer herd. A robust reproductive capacity supports the herd’s exponential growth, suggesting the need for responsible, controlled, and regulated management. In the absence of balanced predator-prey interactions to control herd size, management strategies based on hunting of white-tailed deer become critical to manage the herd’s growth and protect the habitats used and consumed by the growing deer herd.

If left unmanaged, the deer herd’s growth will increase deer densities, leading to overconsumption of natural landscapes, crop damage, and vehicle accidents. Additionally, an increase in deer density will increase animal-to-animal contact rates, increasing disease transmission rates for diseases like Chronic Wasting Disease (CWD). As explained in Rivera et al. in 2019, many studies on CWD’s characteristics and transmission reveal this disease’s impact on  white-tailed deer. Therefore, it is crucial to learn about White-tailed deer’s reproductive parameters; after all, it informs population growth, deer herd health and informs management decisions that support the herd’s health and its habitats.