It’s Pride Month Illini! The month of June is host to events celebrating LGBTQ people and the Stonewall Riots that occurred in 1969 and served as the tipping point for LGBTQ civil rights. While you can look forward to the Champaign-Urbana area celebrating Pride in September, the festivities are turning up this weekend in Chicago. Below, you’ll find brief facts about the Chicago Pride Parade and learn more about what’s coming this weekend!

If you’re in the Champaign area and still want to know how libraries were involved in the Gay liberation movement, visit the Marshall Gallery in the Main Library building to see the exhibit, Out of the Closet & Onto the Shelves: Librarians and the Oldest Gay Professional Organization in the U.S. This display will be up until June 30th! 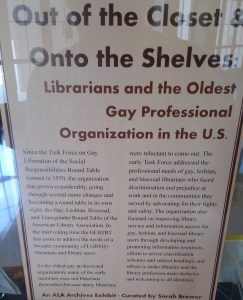 Out of the Closet & Onto the Shelves