Language learning through immersion with new cost-effective virtual reality technology can potentially facilitate personalized learning anytime and anywhere. The team led by Prof. Steve LaValle (Computer Science), Silvina Montrul (Spanish and Portuguese and Linguistics) and Prof. Robb Lindgren (Curriculum and Instruction) is working with graduate students Anna Tsiola (Linguistics), Begoña Arechabaleta (Spanish and Portuguese) and Cameron Merrill (Computer Science) and Nancy Wesselman from St. Lois, MO Public school district to develop immersive language learning activities in Spanish as a second language to be adapted to K-12 and college. In the photos of the group meeting below, we are evaluating the first iteration of our virtual panorama of La Plaza Mayor in Madrid. 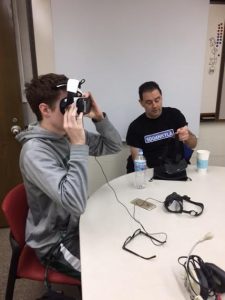 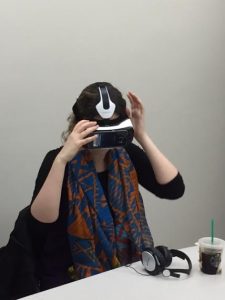 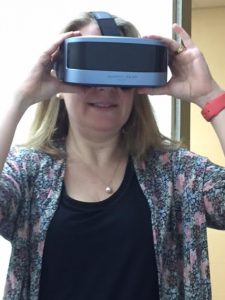 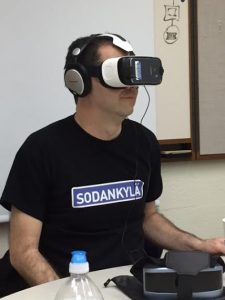 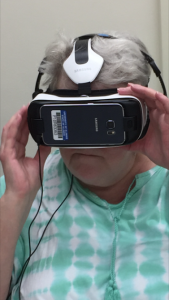 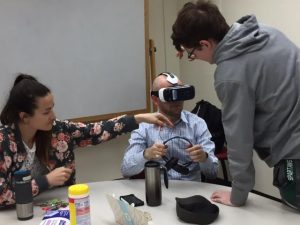 Articles and genericity in native and non-native Brazilian Portuguese

Investigation of articles and genericity in the Brazilian Portuguese of native speakers as well as of learners who speak English and/or Spanish as their prior languages. Focus on the acquisition of semantic contrasts between different types of generics, and on the role of transfer in third language acquisition.

Comparison of heritage speakers and L2 learners in acquisition and processing of several grammatical properties.

Differential Object Marking in Spanish and Hindi monolinguals and bilinguals

This is a visual world eye-tracking study that examines the auditory processing of wh- questions among heritage bilinguals and second language learners of Spanish.

This project compares accuracy in L1-Korean L2-English learners’ use of the English definite article in tasks targeting more explicit vs. more implicit knowledge. The study also examines whether the semantics of Korean demonstratives influences patterns of L2-English article use, at explicit and/or implicit levels.

While previous research indicates that native speakers and early learners of gender-marking languages use gender-marked elements of noun phrases during the spoken word recognition process, it seems that late L2 learners do not do the same. The goal of this study is to determine whether native speakers and late L2 learners of Swahili make use of gender and number marking on verbs to facilitate noun recognition.

Study of comprehension of gender agreement in noun phrases, plural agreement in nouns and verbs, articles and genericity and the copulas ser and estar in children learning Spanish as a second language. Comparison with incipient adult L2 learners.

The goal of this project is to determine whether native speakers and L2 learners of Swahili decompose nouns into their roots and inflectional affixes. Swahili differs from languages in which morphological decomposition has been studied previously, in that rather than using suffixes to mark gender and number, Swahili uses prefixes.

This project investigates the availability of surface scope vs. inverse scope to double-quantifier sentences such as One girl stroked every kitten in Russian. The relative contributions of word order, prosody, and information structure are examined. The project furthermore compares scope preferences among native speakers, second language learners, and heritage speakers of Russian.

Reactivity in L2 writing: Effects of thinking aloud on complexity, accuracy, and fluency

This study seeks to gain insight into L2 and heritage learners’ writing process and resulting written product using think-alouds. In a within-subjects design, all participants write two narratives in their second or heritage language (in both cases, Spanish), one silently and the other while thinking aloud. The results will shed light on how similar or different the two groups are in terms of processing and will also determine whether the think-aloud method caused any significant differences between the texts in terms of complexity, fluency, or accuracy.

The processing and production of agreement morphology in native, heritage, and L2 Arabic

The goal of this project is to compare the processing and production of person, number, and gender morphology across native speakers, heritage speakers, and second language learners of Arabic. Existing research on other languages indicates that while native speakers process and produce agreement morphology with high levels of accuracy and automaticity, heritage speakers and second language learners tend to do so less efficiently and with lower levels of accuracy. We will investigate whether these three groups of Arabic speakers differ in how they comprehend or produce agreement morphology, either quantitatively or qualitatively, and whether this varies based on the type of agreement or the type of agreement morphology. We will also examine whether overall proficiency level plays a role in any differences found.

The role of explicit information in L2 and HL instruction

A number of studies examining grammatical gender in L2 acquisition indicate that learners are less sensitive or insensitive to gender when processing their second language. In addition, they are consistently less accurate in the production of gender agreement than native speakers. One hypothesis regarding why this may be the case proposes that links between lexical items and gender nodes are weaker in L2 learners than in native speakers of gender-marking languages. The goal of this study is to investigate whether this is true, and whether morphophonological transparency plays a role in the strength of the links that are formed.

Copyright University of Illinois Board of Trustees
Developed by ATLAS