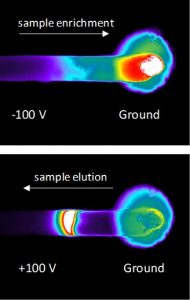 An important area of our research is the development of microfluidic and nanofluidic systems for comprehensive proteome analysis. The crude protein sample, which is a complex mixture of thousands of proteins, is separated and prepared for mass spectrometric (MS) analysis on the microfluidic chip before introduction into the MS by electrospray ionization (ESI). Once fully developed these systems will increase the number of proteins identified providing a more complete description of the proteome while increasing the speed and reproducibility. One functional element of this system are nanofluidic/microfluidic interfaces (NMIs) that provide rapid enrichment of protein samples that ultimately makes detection of ultra-trace components possible. A unique aspect of our NMI concentrators is that they enrich samples based on electrophoresis and are therefore are compatible with microchannel coatings that reduce surface charge and deleterious protein adsorption. In the images on the right, the enrichment of a sample that is not detectable at its initial concentration is shown in a microchannel terminated with a nanocapillary membrane. The negatively charged sample is enriched by electrophoresis, and an enriched band is eluted by switching the direction of the electric field. 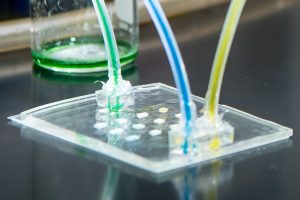 In recent years, the critical role that the human microbiome plays in health has been increasingly recognized. In the gut, beneficial bacteria aid in digestion, nutrient utilization, and degradation of harmful metabolites. However, not all bacteria are beneficial and even beneficial bacteria can cause problems when they grow to significant levels in the wrong location. Therefore, we are determining the role of location and environmental conditions on the response of bacteria to antibiotics. In addition to the human microbiome, bacteria exist in nearly all environments on earth and they sense and respond to changes in their environments as do all living organisms.  Because of their environmental ubiquity, we believe bacteria provide a unique window into past events as they are affected by and respond to their environment. Thus we are investigating the response of bacteria to various stressors, to determine if a particular event, such as the release of a chemical weapon, can be differentiated from all of the other stressors that the bacteria encounters. 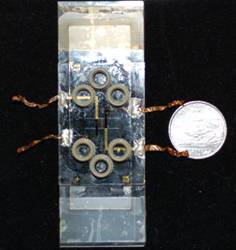 Currently, medical diagnostic devices are being revolutionized as numerous biomolecular tests are being developed. These next-generation diagnostic systems will provide earlier detection, cost less, and operate in remote areas. Our lab is developing novel point-of-care diagnostic devices based on: 1) traveling wave electrophoresis, 2) non-linear electrophoresis of single particles, and 3) mechanophenotyping of individual cells. These systems will be used to detect pathogenic bacteria, and viruses in body fluids and water; and differentiate cells that are healthy, infected by bacteria, or infected by a virus.