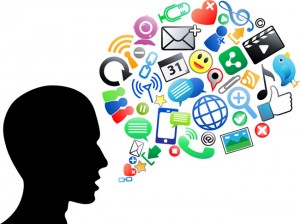 Did you ever track how many hours you’ve spent on your phone over a five day period? Right off the bat, you’re probably thinking one of two things: one, starting this blog entry off with a question was a poor hook decision, or two, why the hell would someone ever do that? Well, recently in my Media and Society class, we were assigned a project in which we had to track our media usage.

At first I thought to myself, “Huh, this assignment shouldn’t be too hard. I barely use media, and I was thinking for the next five days I’d give transcendentalism a try anyways.”  Well, it turned out I use a lot more media than expected, and surprisingly, transcendentalism didn’t fall through.

What I discovered through my five days of glorious research was that media controls my life. I spend hours upon hours utilizing numerous media outlets. Most of my time, roughly sixteen hours, I spent doing school work on my computer. Other than that, I spent all my time either on my phone browsing social media, texting, or doing other various things on my computer.

The project acted as a very eye opening experience because I had the opportunity to look way more in-depth at how much of our lives can be controlled by media. I definitely recommend tracking your media use for at least a day. Chances are you’ll be very surprised by your findings. I also recommend attempting a project like this if you have a sudden urge to feel as though you have no self control!

At first I looked at my data thinking that I should perhaps lower my media usage; however, when thinking about it more, I came to the realization that I am a media major. If I were to lower my usage, it would be rather contradictory. Instead, I should embrace everything that media has to offer me.

Our world moves fast, and it isn’t slowing down anytime soon, especially in terms of media. I don’t believe spending a large amount of one’s time using differing media outlets should necessarily be viewed as negative. It is a growing part of all of our lives and should instead be, as stated previously, embraced. We should look forward to the future and all that media will have to offer.