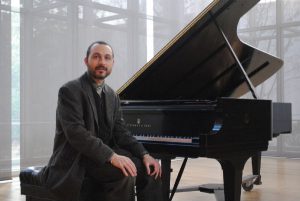 With a concerto repertoire including more than 60 works, Pompa-Baldi recently performed cycles of all the Rachmaninoff piano concertos, the five Beethoven piano concertos and both Brahms piano concertos with various orchestras. He has played recitals in most major venues around the world. Among the stops on his tours, he performed in Vienna, Austria; Malaga, Spain; Nancy, France; New York; and throughout China (Beijing, Shenzhen, Hangzhou, Dalian and Guangzhou). In 2019, he was a returning guest at the third edition of the Lang Lang International Piano Festival in Shenzhen, China, continued his honorary guest professorship at the Beijing China Conservatory and was named honorary professor at the Shenyang Conservatory of Music.

Pompa-Baldi has recorded over 30 CDs to date for various labels including Centaur Records, Harmonia Mundi, Steinway, Two Pianists, Azica and Brilliant Classics. Among them, the complete piano and chamber music works of Grieg, the Josef Rheinberger piano sonatas, the complete Hummel piano sonatas and CDs dedicated to Brahms, Schumann, Liszt, Respighi and Rachmaninoff. For the Steinway label, Pompa-Baldi recorded a disc of songs by Francis Poulenc and Edith Piaf, arranged for solo piano, to commemorate the 50th year of the passing of both French musical icons, as well as a CD titled Napoli, which features new piano versions of famous Neapolitan songs. His latest releases feature concertos for violin, piano and orchestra by Mendelssohn, Haydn and Hummel. Pompa-Baldi has been a Steinway Artist since 2003.

He is often invited to judge international piano competitions such as the Cleveland, Hilton Head, E-Competition (Minneapolis), BNDES Rio de Janeiro and Edward Grieg (Bergen), among many others. He serves as president of the jury and artistic advisor for the San Jose International Piano Competition since 2006. Pompa-Baldi is on faculty at CIM as distinguished professor of piano. His students have been prize-winners in important competitions such as Marguerite Long, Hilton Head, Isang Yun and Gina Bachauer.

He is regularly invited to teach master classes and festivals in the US and all across the world.  In 2015, Pompa-Baldi founded the Todi International Music Masters festival, of which he is also artistic director and faculty member. This summer festival takes place every August in the beautiful Italian town of Todi. It features 15 concerts in 15 days, with internationally renowned faculty members and students from all over the world.