Drosophila cellularization allows us to study the actin cytoskeleton across sub-cellular systems and scales.

The Drosophila embryo initially develops as a syncytium. Then, during the 14th cell cycle, furrows invaginate between ~6000 nuclei to generate a sheet of cells.  This cell packaging process is called “cellularization”.  Immediately after cellularization the newly formed cell sheet bends and folds as gastrulation starts to shape the embryo. 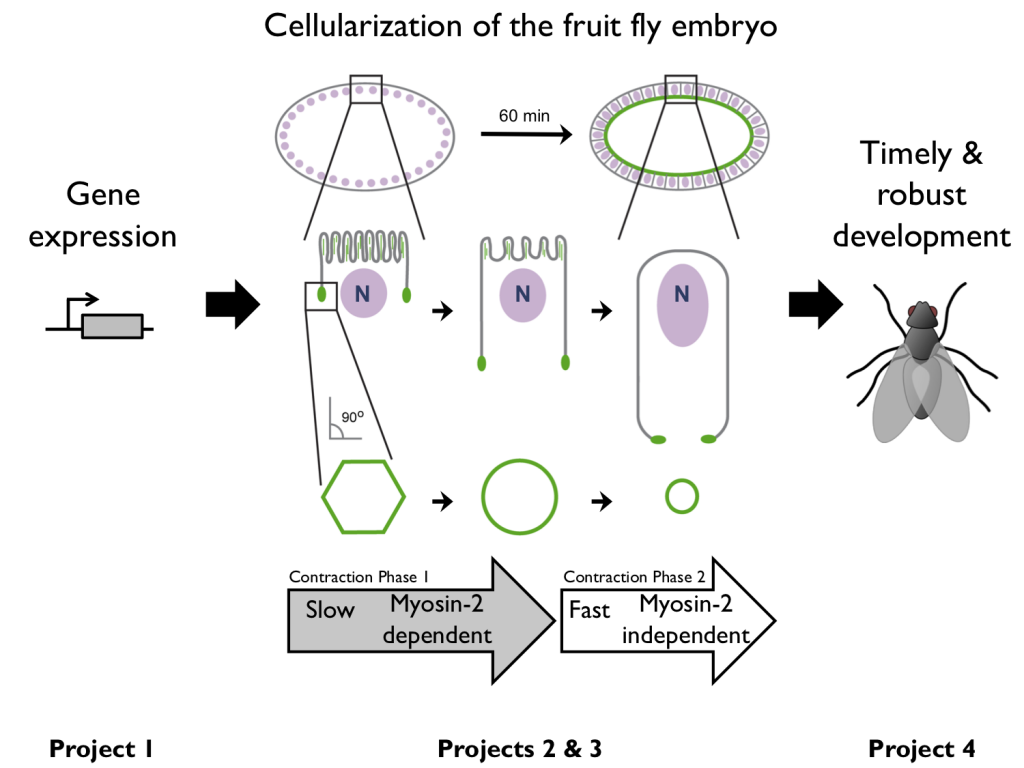 In addition to studying the remodeling of these two F-actin populations during cellularization, we expand our analysis to relate F-actin remodeling to upstream events like gene expression and downstream outcomes like embryo fitness.  The four research projects summarized below encapsulate our “holistic” approach to understanding the actin cytoskeleton across scales and sub-cellular systems.

(1) Gene Expression — Gene expression instructs embryonic morphogenesis. But we have little quantitative understanding of this relationship. We are using live-cell imaging to ask how transcription kinetics and mRNA localization influence the timing and site of activity of actin binding proteins during morphogenesis.

(3) Actomyosin Ring Contraction — Although we know what proteins are in actomyosin rings, we still do not understand how these proteins work together to drive contraction.  We are using single-molecule imaging to count the number of specific actin binding proteins in rings and so determine their local concentrations, ratios and cumulative contributions to contraction.

(4) Actin Stress Response — Actin is increasingly recognized as a mediator of stress response.  We identified an actin stress response in embryos that is induced by heat stress. We are using imaging and biochemistry to determine how this stress response drives remodeling of nuclear and cytoplasmic actin and ultimately influences the fidelity of morphogenesis and embryo viability.