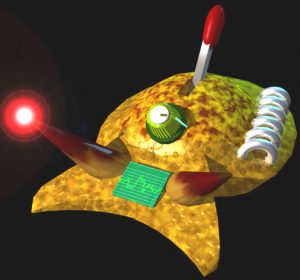 Cyberslug: Contemporary artificial intelligence lacks the attributes of natural intelligence, in particular the abilities to relate information affectively. Accordingly, it is notable that the most complex animal behaviors serve primitive homeostatic goals, and emerge from the primitive mechanisms generating motivation and reward learning. Here we show in simulation the function of a basic neuronal circuit for cost-benefit decision, derived from studies of a predatory generalist, the sea-slug Pleurobranchaea californica, and based on affective integration of information. Its simplicity may reflect distant ancestral qualities on which complexities in economic, cognitive, and social behaviors were built. The simulation validates experimental data and provides a basic module for expansion of behavioral complexity.

We are presently working to add enhanced cognitive abilities and social behavior to the Cyberslug in simple piecemeal fashion following an evolutionarily plausible course. We are guided by comparative reference to invertebrate and vertebrate species that vary incrementally in their cognitive and social expressions with complexity of lifestyle. Of necessity in evolution, most valuation and decision processes in the economies of complex social animals would have been elaborated onto pre-existing, simpler decision modules for homeostasis, like those of Pleurobranchaea and other simple invertebrate foragers.

Cyberslug is written to be transparent and accessible to a broad range of users. Cyberslug is freely available online at https://github.com/Entience/Cyberslug. To use the software, first download the NetLogo programming language software from https://ccl.northwestern.edu/netlogo/, then use it to open Cyberslug 2.0.

We would like to hear about your experimentation and modifications.