Sensing Water explores water and its many relationships to expressive culture.

Dry Signals is a digital ethnographic sound diorama based on research in Brazil’s semi-arid sertão in 2015, a year of extreme drought.

Research and writing by Michael Silvers, original artwork by Manuel Neto, web deseign and development by Lucas Almeida, and Portuguese translation by Álvaro de Alencar. Published in Sensate: A Journal for Experiments in Critical Media Practice in 2020 in the special issue “Sounds of the Anthropocene” guest edited by Marina Peterson.

CISS is a virtual space for recording, documenting, studying, and sampling the sounds of Central Illinois and places actively connected to Central Illinois. Among other things, CISS documents water sounds.

It was first created by students in Dr. Michael Silvers’ MUS 416 “Music and Animals” in Fall 2020 amid pandemic and lockdown. Those sounds captured something of the naturalcultural world of that difficult moment in Central Illinois and other places where our students resided during that period.

ELEMENTS is a sound exploration of four states of matter in the form of earth, fire, air, and water. Ruminating on Thale’s philosophy that “all is water,” ELEMENTS is also a meditation on water’s singular importance and relationship to the other three elements.

ELEMENTS is the doctoral project of UIUC DMA graduate Dr. Kirsten Hedegaard, who is Director of Choral and Vocal Activities at Loyola University Chicago. ELEMENTS includes musicians, dancers, and other creative collaborators from Loyola University and all three University of Illinois campuses as well as the New Earth Ensemble. Its production was supported by Sensing Waters and was presented at Loyola’s Climate Conference and UIC’s Summer Institute on Sustainability and Energy (SISE)

Water, drought and song in the Kingdom of eSwatini

This presentation explores ideas surrounding water within the musical world of eSwatini in southern Africa. As a country plagued by severe and regular drought and as southern African moves permanently into a state of water stress, the research presented aims to understand how indigenous musical forms of expression have portrayed ideas relating to water. In eSwatini, water is intrinsically linked to cattle (and so, to wealth and prosperity), to ecology and rural life and, to domestic, cultural and commercial work, and to spiritualism. Within the rich world of Swazi religious and cultural belief, water is a key signifier of power, communication and change. Read more about the talk by clicking the image below.

Learn more about Cara Stacey, who is a scholar, composer, and performer, and her original compositions that address drought and water here: https://sisgwenjazz.wordpress.com/2020/07/11/stacey-juritz-ravens-keller-sounds-of-drought-and-water/ 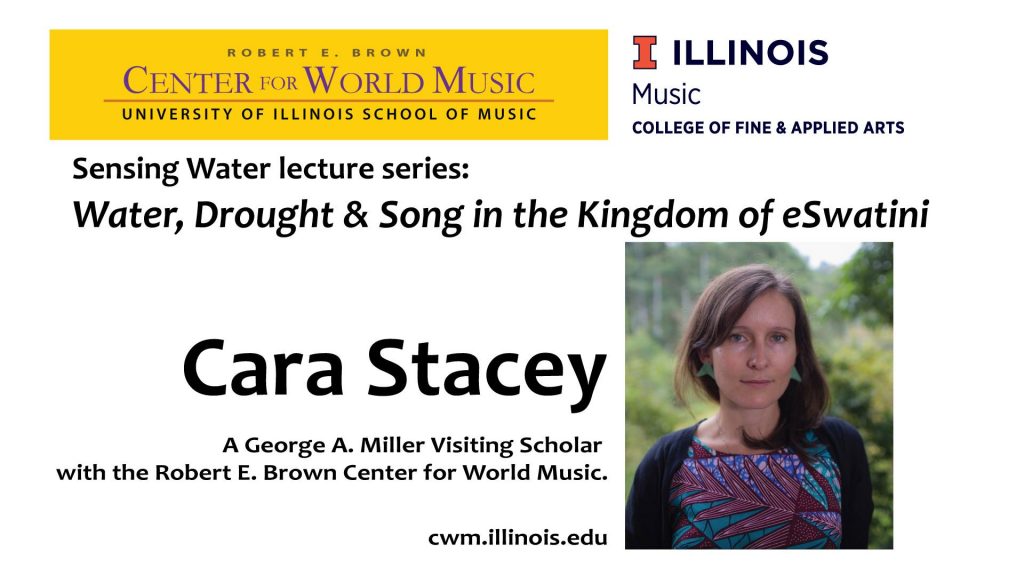