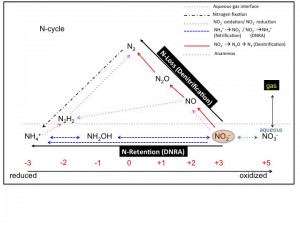 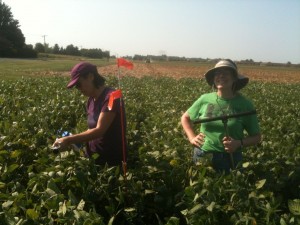 1:  PUNCS: Towards Predictive Understanding of Nitrogen Cycling in Soils

ABSTRACT:  Fossil fuel consumption, agriculture and land use are dominant forces that influence global biogeochemical cycles. Most publicized are the impacts of anthropogenic activities on carbon (C) cycling including atmospheric CO2 increase and its effects on global climate; however, the nitrogen (N) cycle has been altered more than any other basic element cycle. More than ever, societies depend on the Haber-Bosch process, which introduces about 100 Tg (!) of reactive nitrogen (i.e., ammonium) per year to the environment worldwide, most of which is applied as nitrogen fertilizer. A considerable amount of the fertilizer N ends up in the atmosphere as N2 and N2O gases, mediated predominantly by microbial processes in soils and subsurface environments. The emitted N2O represents not only a loss of N for plant growth but also acts as a much more potent greenhouse gas than CO2. Although, progress has been made to identify the key reactions responsible for N turnover in soils, knowledge gaps remain. Nitrate is largely consumed by dissimilatory nitrate reduction to ammonium (DNRA) and nitrate reduction to N2O and N2 (denitrification). DNRA oxidizes more C per mole of nitrate than denitrification and generates a cation (NH4+) that is strongly retained in most soils, indicating that these processes have profoundly different impacts on N retention and greenhouse gas (CO2, N2O) emissions. Microbes capable of DNRA or denitrification coexist but the relative contributions of these competing processes cannot be predicted faithfully with current models. Further, our recent studies identified novel non-denitrifying bacteria that reduce N2O to N2; however, current greenhouse gas flux models do not consider this heretofore unrecognized N2O sink. This paucity of information limits the development of more accurate, predictive models of N-flux including the effects of N-retention on plant growth and biomass yield for bioenergy production, as well as greenhouse gas (e.g., N2O) emissions.

To elucidate the environmental factors controlling N-turnover in soils, we will conduct physiological studies, stable isotope probing (SIP) experiments, (meta)genomics and (meta)transcriptomics analyses, and high resolution imaging (NanoSIMS) on systems of increasing complexity (i.e., pure cultures to mesocosms established with distinct Midwest U.S. soil types). We will quantitatively monitor genes and transcripts related to N-turnover in response to changes in pH, temperature, soil moisture, C- and N-content and assess the emitted gases using a mass balance approach based on (geo)chemical and stable isotope measurements. By comparing the gene-centric and genomic (who is there?) to the transcriptomic, SIP (who is active?) and NanoSIMS (how active?) data gathered from different treatments, system-level insights into the pathways controls and the functional redundancy within microbial communities controlling N-flux in soils will be obtained. The proposed research takes advantage of previous accomplishments, ongoing SBR/GTL-funded projects, an experienced, highly interdisciplinary team, and complements efforts performed in DOE’s BioEnergy Science Center (BESC). The integrative analysis of data obtained at the molecular/micro scale (e.g., genes and species responding to treatments) to (at least) the intermediate scale (e.g., rates of processes in mesocosms) will provide crucial information to (i) improve soil quality and enhance biomass yields for bioenergy production, (ii) reduce N-loss due to nitrate runoff, (iii) predict and control the movement and fate of environmental contaminants, whose fate is linked to N-turnover (e.g., toxic metals and radionuclides), (iv) develop a comprehensive understanding of the interlinked cycling of N and C, (v) generate currently lacking datasets required to improve predictive N-flux and greenhouse gas emission models, (vi) provide innovative technologies to characterize in-situ biological processes and networks at different levels of resolution, and (vii) evaluate metatranscriptomics as a quantitative in-situ monitoring tool. 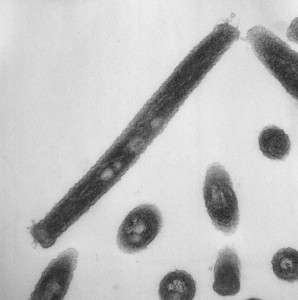 2.  Microbiological-enhanced mixing across scales during in-situ bioreduction of metals and radionuclides at Department of Energy Sites

Bioreduction is being actively investigated as an effective strategy for subsurface remediation and long-term management of DOE sites contaminated by metals and radionuclides (i.e. U(VI)). These strategies require manipulation of the subsurface, usually through injection of chemicals (e.g., electron donor) which mix at varying scales with the contaminant to stimulate metal reducing bacteria. There is evidence from DOE field experiments suggesting that mixing limitations of substrates at all scales may affect biological growth and activity for U(VI) reduction.

Current conceptual models hold that biomass growth and reduction activity is limited by the physical mixing zone between U(VI) and the electron donor amendment. However, a growing body of literature suggests that cell-to-cell interaction occurs over length scales extending tens to thousands of microns. We hypothesize two potential mechanisms involved in electron transfer to metal reducing bacteria will enhance reaction rates between substrates in physical mixing zones. The first is the formation of single- or multiple-species biofilms that transport electrons via direct electrical connection such as nanowires through biofilms to where the electron acceptor is available. The second is through diffusion of electron carriers from syntrophic bacteria to dissimilatory metal reducing bacteria (DMRB). The specific objectives of this work are i) to quantify the extent and rate that electrons are transported between microorganisms in physical mixing zones between an electron donor and electron acceptor (e.g. U(IV)), ii) to quantify the extent that biomass growth and reaction are enhanced by interspecies electron transport, and iii) to integrate mixing across scales (e.g., microscopic scale of electron transfer and macroscopic scale of diffusion) in an integrated model to quantify these mechanisms on overall U(VI) reduction rates.