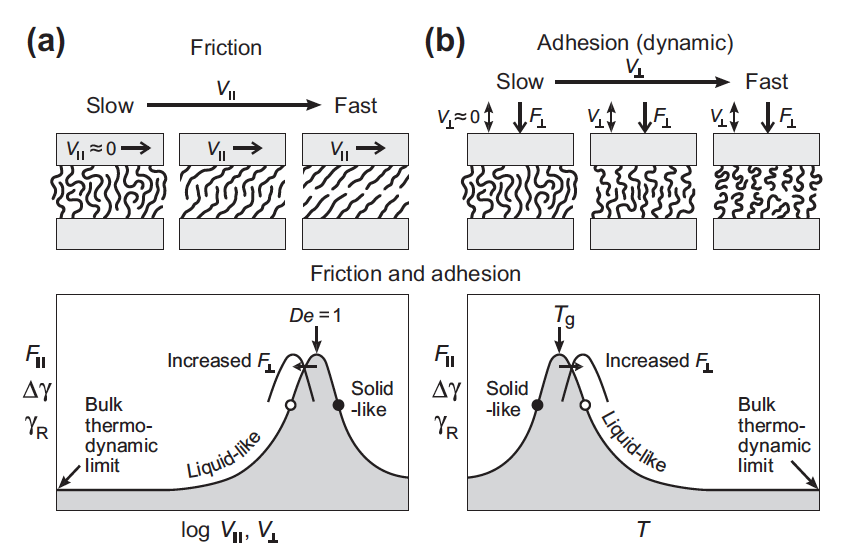 From Israelachvili’s book “Intermolecular and Surface Forces”, 2011. Dynamic friction phase diagrams showing the variation of the friction and adhesion forces with (a) sliding velocity, and (b) temperature, which are related by the time-temperature superposition principle (Ferry, 1980).

A glance into some of our current research projects:

The group has expertise in Atomic Force Microscopy, Surface Forces Apparatus, rheology, QCM, x-ray scattering, and spectroscopy techniques, among others. See our most recent posters.

While many works have confirmed the layering structure of nanoconfined ionic liquids, fundamental studies of their dynamic properties are less abundant. This work evaluates the resistance of molecularly thin ion layers to flow out of films confined between atomically flat surfaces. We measure the time-dependent drainage of six different ionic liquids from large surface separations down to ~3 nm with angstrom resolution in dynamic force measurements with a Surface Forces Apparatus and determine the effective viscosity of the films of thickness smaller than ~10 nm by numerically solving the equation of motion. The latter requires appropriate models for the equilibrium surface forces (electrostatic, solvation and van de Waals forces) and the Reynolds theory of lubrication to describe the hydrodynamic drag induced by the motion of the solid surface in the viscous liquid. We show that the effective viscosity of the six ILs becomes up to two orders of magnitude larger than the viscosity of the unconfined liquids and is quantized as a function of the number of confined ion layers. When the effective viscosity is normalized by the bulk viscosity, the data of the six ionic liquids collapse into an exponential function of the ratio between screening length and the film thickness. Given the ionic nature of the liquids and the collapse, we propose that the increase in viscosity includes an electroviscous retardation. This work thus describes an electrokinetic feature of thin ionic liquid films confined in a narrow space, like a porous medium or a lubricated contact between solids, and therefore, it has practical important implications in areas from energy storage and nanofluidics to tribology. From” Mengwei Han and Rosa M. Espinosa-Marzal. Electroviscous Retardation of the Squeeze-Out of Nanoconfined Ionic Liquids. Journal of Physical Chemistry C (2018). DOI: 10.1021/acs.jpcc.8b04778. Just accepted.”