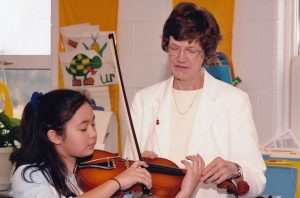 Nancy Kredel studied violin with Paul Rolland at the University of Illinois (M. M. and M. S. in Music Ed, 1968) and she has used his teaching idea ever since. She directed the Elementary String Program at the NC School of the Arts in the 1970s, a program designed by Paul Rolland. She has presented Paul Rolland Workshops throughout her career, in the US, Hamburg and London. She served as Assistant Principal Viola in the Tulsa Philharmonic Orchestra and Principal Viola in the Greensboro (NC) Symphony. She has taught viola at Salem College, Wake Forest University and UNC at Greensboro.

In 2009, she co-founded and served on the faculty with Lynne Denig and Marla Mutschler for the Paul Rolland String Pedagogy Workshop at George Mason University, which in its 9th year, 2017, has moved “back home” to the University of Illinois, where Rolland did his most important work. This conference is a direct continuation of the GMU workshop, a Midwestern branch of the initiative begun in 2009.

In 2016, Gail and Peter Rolland founded the Paul Rolland String Pedagogy Conference at Arizona State University, becoming the Western branch of Paul Rolland Pedagogy. The summer’s ASU Conference is June 5 – 9, 2017. Both the ASU and U of I workshops will have Kids Camps.

In addition to being a life-long fan of Paul Rolland pedagogy, she has strong interest in violist Karen Tuttle’s pedagogy and the Alexander Technique.