Peter Simon Pallas was a part of the first Russian Siberian expedition and brought back samples and data that provided a holistic scientific survey of the 18th century Russian Empire. He later made a journey to what were the southern provinces of Russia in 1793. This included Ukraine and the Crimean Peninsula. In total, Peter Simon Pallas published an estimated 170 works. Some of these publications, such as Flora Rossica, were the first of their kind. His most popular publications include: Elenchus Zoophytorium (1766), Miscellenia Zoologica (1966), “Reise durch Verschiedene Provinzen des Russischen Reichs” (1771-76), Flora Rossica (1784 and 1788), “Travels through the Southern Provinces of the Russian Empire”, and Zoographia Rosso-Asiatica. The latter of which is a zoographical overview of Russia and Asia. It was finished in 1811-months before Pallas’s death. However, it was not published until 1831 due to the extended time that was needed to organize the fifty plates and several illustrations included in the publication. Among his publications are several monographs of plant and animals including antelopes, rodents, buntings and Spiraea L. and Astragalus L. (Natural History Museum). 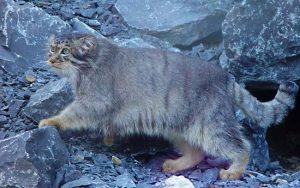 Many species of birds, mammals, and plants carry his name. One well known animal with his name is Pallas’s Cat also known as the Manul that lives in high elevation areas and is the size of a domesticated cat. Other animals include, Pallas’s fish-eagle and Pallas’s warbler (Natural History Museum).  He also created an herbarium that contained samples and works from various botanists of his time. However, his herbarium is no longer in existence as a whole because it was sold in 1808 (Natural History Museum). Because of his impact on zoology and botany, Carl Linnaeus, the scientist who created modern taxonomy, named a plant genus after him: Pallasia. However, his namesakes are not limited to plants and animals. His name is also attached to a volcano on the Kuril Islands, a mountain in the Ural Range, a peninsula in the Kara Sea, a type of meteorite (pallasite), a town (Pallasovka), and several streets.

For all of his contributions to the scientific community, Peter Simon Pallas was awarded membership to the Royal Society in 1763 and the Accademia dei Lincei. He was a member of most the major scientific academies in Europe (Parker 2). He was also elected to the Philosophical Society of Phildelphia in 1791 (Parker 2). Several of Pallas’s works were translated from German into different languages so that they could be read internationally. “Journey through Various Provinces of the Russian Empire” was translated into Russian, French, Italian, and English.  His works are cited in four of Darwin’s publications as evidence for his theory of evolution (yovisto.com). In addition, Catherine the Great gave him several estates. Some were located in Crimea because Pallas enjoyed the area when he visited and studied it in 1793. In 1795, Pallas moved to Simferopol, located on the Crimean Peninsula, and lived there with his family until the death of his wife in 1810. He was then granted permission by Emperor Alexander to return to Berlin, where he died in 1811 (Natural History Museum). His eulogies were read before the Berlin Academy by Karl Rudolphi and to the Paris Academy by Georges Cuvier (Parker 2)