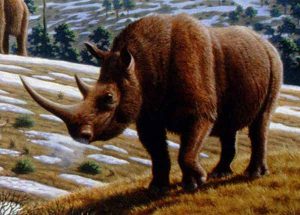 During his first Siberian expedition, Peter Simon Pallas reported back on well-preserved pachyderms they had discovered in the ice. The first set of remains he discovered was around the city of Simbursk in March, 1769. Pallas conjectured that the pachyderm may have been transported to its location by a massive flood that he believed had occurred centuries before(Parker 81). He believed that the flood may have been the result of a geological event south of their position (Parker 81). Most of the pachyderms were reportedly discovered in the basin of Siberia east of the Ural mountain range to the Pacific Ocean. Pallas identified the remains as belonging to various species of elephant and mammoth, rhinoceros, and buffalo (Geike, 179). Some specimens were so well-preserved by the dense ice of Siberia that the pachyderms retained their skin and some hair. Pallas deduced from this that these older species of pachyderms were able to withstand a temperate climate whereas the current species of rhinoceros and modern pachyderms cannot. These specimens of tusks and bones were distributed among museums in Russia, including the Russian Academy of Sciences, where he was employed, and later on throughout Europe.