Peter Simon Pallas returned to St. Petersburg in July of 1774, with an abundance of data and specimens from his expedition. His reports alone totaled forty-seven and numerous letter to colleagues. He sent at least twenty crates to be analyzed while on the expedition (Parker 72). Several of the species in which he collected specimens later became extinct when the native areas became populated. He published his findings from the expedition between the years of 1771 and 1776 in three volumes in a series titled “Journey through Various Provinces of the Russian Empire” or in the original German, “Reise durch verscheidene Provinzen des Russischen Reichs” (Britannica). Accompanying the text, Pallas also included several plates with maps and illustrations. The table of contents in the book have corresponding details of what is illustrated on the plates.

Another publication of Peter Simon Pallas is titled “Flora Rossica.” This work of Pallas’s, published in 1784 and 1788, consisted of only two volumes due to monetary insufficiency. “Flora Rossica,” or Russian Flora, is an elaborate study of the botanical configuration of the various sections of the Russian Empire of his time. This elaborate encyclopedia contained a detailed analysis of 283 species of plant (Natural History Museum). Because Pallas had returned to St. Petersburg, he was provided samples of plants by other scientists to analyze. This publication, although incomplete, is accepted as the first compilation of Russian flora in text (yovisto.com). 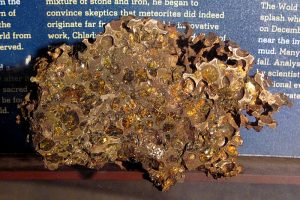 Krasnojarsk Meteorite fragment that is a part of the Pallasite meteor type. Source: saint-petersburg.com

Another discovery made by Peter Simon Pallas was a 600kg (about 1323lbs) metallic rock. This rock was mostly composed of iron and stone and had bright crystals inside. Upon further analysis by German physicist Ernst Chladni, the large rock was found not to be a normal rock at all (amnh.org). In fact, it was a meteorite. This large specimen contains large amounts of iron consistent with being formed in an asteroid. The green crystals were olivine. The meteorite and other meteorites with similar compositions carry Pallas’ name and are named pallasite. This particular specimen found on the Siberian Expedition is known as the Krasnojarsk Pallasite after the city it was found near in southern Russia in Siberia (amnh.org).

Upon his return to St. Petersburg in July of 1774, he arranged his notes from his expedition and also worked with the Empress on other projects. One such venture was an attempt to find a parent language or a common predecessor of all the languages. They organized a survey that was to be sent out all around the world to record all the languages they possibly could. Although they could not identify a single parent language, they created a dictionary of languages. This study may have been the beginnings of what is now linguistics. During this time, Peter Simon Pallas was asked by the Empress to educate her two sons, the Grand Dukes Konstatin and Alexander, in natural history (saint-petersburg.com).