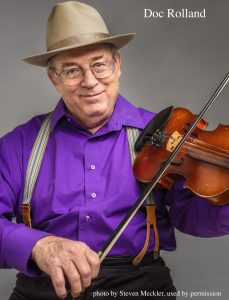 Peter Rolland has had a 48-year career as a professional fiddling entertainer and fiddle teacher that has kept him “young at heart.” His early training on the violin was from his father Paul Rolland, a founder and president of ASTA. With his father’s encouragement, Peter applied his father’s example to the genre of fiddling. He organized classes and taught fiddling at five universities in the west. Through research into fiddling repertoires of elderly fiddlers supported by the National Endowment for the Arts and the Arizona Commission on the Arts he has preserved and purveyed Arizona’s fiddling and authentic cowboy music traditions to audiences in the United States, Canada and Western Europe for over three decades.  He has won numerous fiddle contests at the state and national level, and trained many fiddle champions and professional performers.

His career as a fiddling entertainer has taken him on many international tours, most recently in 2014 on a 24-concert tour of major civic venues in China with his 9-piece band. Northeastern Music Publications, Inc. has published his folio of traditional fiddle tunes and cowboy songs arranged for school orchestra. In 2009 he produced and released the DVD of Paul Rolland’s film series “The Teaching of Action in String Playing” (www.paulrolland.net). In 2010 he presented a 4-day workshop on American fiddling at the German Classroom String Teacher’s conference in Trossingen, Germany, and shortly thereafter presented a lecture/demonstration on both Rolland methods and American fiddling at the ESTA conference in Brugge, Belgium. ASTA published his article on fiddle teaching in the AST spring issue, 2011. In 2012 he composed and orchestrated his fiddle concerto “The Traveler’s Footprints” and premiered it with the Chandler Symphony Orchestra.