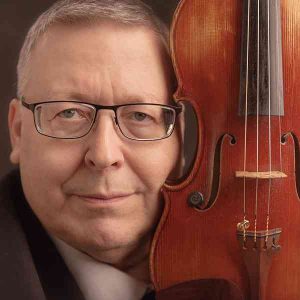 William Wassum is a native of Huntington, West Virginia, where he received his BA in music education and his MA in violin performance from Marshall University. His major teachers at Marshall were Alfred P. Lanegger, Patricia Green, Lucie Furlie, and Dr. Reed Smith.

During his 45 years as a music educator, he has directed award-winning ensembles from the elementary through high school levels in Texas, West Virginia, South Carolina, and Virginia. Mr. Wassum is currently Director of Orchestras at Fredericksburg Christian Schools in Fredericksburg, Virginia. Formerly, Director of Orchestras at Thornburg Middle School in Spotsylvania County, Virginia where he helped to start the Orchestra Program 23 years ago. In Virginia he has guest conducted the Central Regional Orchestra, the Chesterfield All-County Orchestra, the Hanover All-County Orchestra and in Maryland, the Southern Tri-County Honors Orchestra.

William Wassum has been an orchestra conductor, violin and viola instructor, and chamber music coach for the Sam Houston State University String Camp (2 summers) in Huntsville, Texas, and the Blue Lake Fine Arts Camp (12 summers) in Twin Lake, Michigan. He served on the faculty of the Rappahannock Summer Music Camp in Fredericksburg for ten (10) summers. William has had the honor of presenting at the ASTA National Conference six years in a row and continues sharing with other teachers his experience and knowledge.

William began his interest in Rolland Pedagogy during student teaching after being involved in a Paul Rolland styled String Exploratory class under his supervising teacher. Mr. Wassum saw Mr. Rolland in a Master Class at the University of Kentucky and knew that he had to learn more about Rolland Pedagogy. In 1978, William attended a two-week session with Mr. Rolland at the University of Illinois. After Mr. Rolland’s untimely death in November of that year, Mr. Wassum followed Mr. Rolland’s former students and attended pedagogy workshops with teachers such as Gerald Fischbach and Sheila Johnson. This academic school year. William completed Level Four of the Rolland Pedagogy as well as the Rolland Presenter and Mentor Training.

As a Suzuki violin and viola instructor Mr. Wassum taught for the Marshall University Preparatory Department (9 years) and the Converse College Pre-College Department (3 years). He is currently the adjunct instructor of violin and viola and Director of the String Ensemble at the University of Mary Washington. Mr. Wassum continues to teach violin and viola lessons in the Fredericksburg community through the Wassum String Academy at New Life in Christ Church. He has experience and training, not only in Suzuki, but also in Colourstrings and is one of a handful of Americans who has studied the Colourstrings method with its founder and author Geza Szilvay and with Yvonne Frye, the leading Colourstrings tutor from the East-Helsinki Music Institute and pedagogy lecturer at the Sibelius Academy.