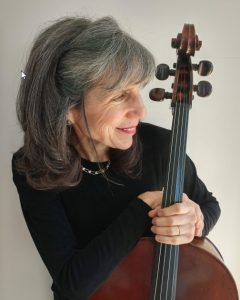 Ida Mercer is a cello instructor at the Cleveland Institute of Music/Case Western Reserve University. A founding member of the Cleveland Cello Society, she currently serves as its Executive Director. From 1998-2021, she was a member of the cello faculty and cellist of the Almeda Trio, ensemble-in-residence at The Music Settlement. She is a cellist in the Cleveland Pops, was a cellist and founding board member of Red {an orchestra} from 2001- 2008 and was Assistant Principal Cellist of the of the Cleveland Opera Orchestra (1982-2009) and the Ohio Chamber Orchestra (1982 to 2000). Since 1990, Dr. Mercer has been a cellist in the Britt Classical Festival, a summer festival held annually in Jacksonville, Oregon. She is a 2010 Cleveland Creative Workforce Fellow, generously funded by Cuyahoga Arts and Culture. In June 2009, Dr. Mercer received the Outstanding Alumni Achievement Award from her alma mater, Belleville High School West in Belleville, Illinois for her contributions to arts and culture. In 2002, the Ohio String Teacher’s Association named her “Studio Teacher of the Year” for Ohio. Dr. Mercer taught cello and music theory from 1980 to 1982 at Luther College in Decorah, Iowa. She holds a Bachelor of Music from the University of Illinois, a Master of Music from the Yale University School of Music and her Doctorate of Musical Arts from the Cleveland Institute of Music/Case Western Reserve University. Her principal cello teachers have been Gabor Magyar, Aldo Parisot, Alan Harris, and Janos Starker. Previously having taught at CIM from 1987-1991, she was reappointed to the CIM faculty in
2006.

Dr. Mercer is a fully certified teacher in Paul Rolland String Pedagogy. First introduced to The Teaching of Action in String Playing in 1976, during her undergraduate studies at the University of Illinois, Paul Rolland’s string pedagogy class was a revelation to her. His approach of relating basic
stance, left hand, and bow arm techniques to simple movements of daily life brought welcome clarity and new understanding to her cello technique. Behind every beautiful resonating tone on a stringed instrument is input from a freely moving, balanced body and Mr. Rolland’s “actions” clearly explained how to attain that balance. Throughout her teaching career, Dr. Mercer has found these actions bring rigor and focus to both private lesson and group class settings. They are an immensely powerful tool for string teachers.