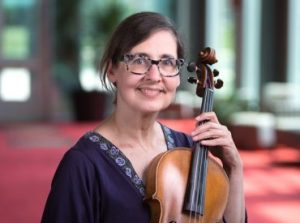 Colette Grossman Abel began her violin studies with her father at age 7 and at age 9 she and her brother appeared as featured soloists with the Sioux City Symphony. In subsequent years they appeared together performing concerti with the Casper, Wyoming Symphony and the Oklahoma City Symphony.

A childhood protégé of the late renowned pedagogue Paul Rolland, Colette was chosen from among his pupils to demonstrate his teaching principles in master classes in Switzerland. She went on to earn a Bachelor’s Degree in Violin Performance from the Eastman School of Music where she studied with Donald Weilerstein of the Cleveland Quartet. Upon her graduation, she and her future husband, Alfred Abel, formed the St. Alban Quartet and together they concertized through Spain, Italy and Germany, receiving favorable reviews from the El Noticiero Universal (Barcelona, Spain) and the Taunus-Zeitung (Frankfurt, Germany). Over the last 20 years she has performed throughout the Midwest and East Coast with Trio Amabile, Musical Musings, Cosmopolitan Chamber Players (NYC) and with the Abel Family String Quartet.

As violist with the St. Alban, Colette felt compelled to embark on a serious study of that instrument and in 1987 received her Master’s Degree in Viola Performance from Indiana University, where she completed all but the dissertation for a DMA. Colette has studied with such prestigious violist as Kim Kashkashian, Csaba Erdélyi, Atar Arad and Donald McInnes. She has appeared as viola soloist, performing concertos by Telemann, Bach, Mozart, Stamitz, Vieuxtemps, Walton, Hindemith and Bruch, with Indianapolis Chamber Orchestra, Indiana University Philharmonic, Butler Symphony Orchestra, Lafayette Symphony, and Marion Philharmonic. She has served as a member of Indianapolis Chamber Orchestra since 1985, and is Principal Violist of the Marion Philharmonic. She has also served as Principal Viola and assistant principal of the Sinfonia da Camera under Ian Hobson.

In addition to her professional responsibilities, Colette is devoted wife to Alfred and mother to Benjamin and Clara.